Step Inside the Sleek Sagaponack Home of a Music-Industry Executive 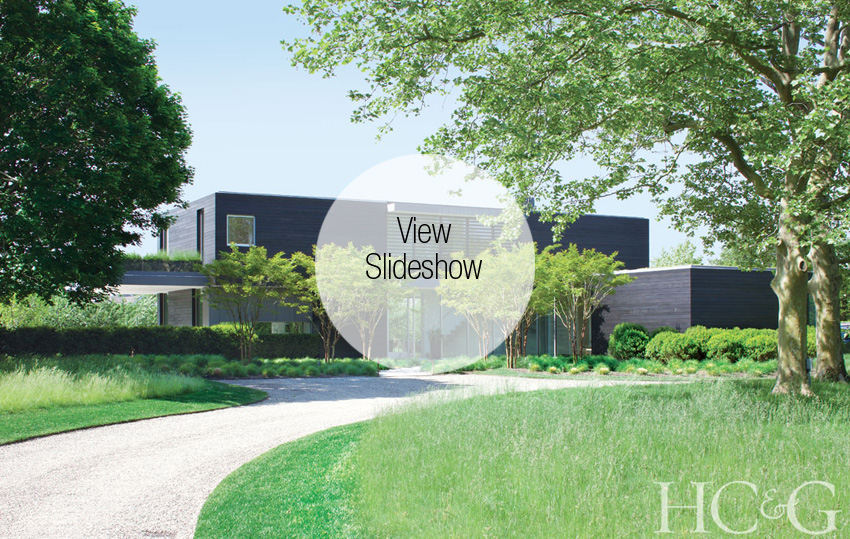 Rare is the client who hires an architect before buying a piece of property, and equally rare is the client who commissions both a landscape architect and a decorator to work with the architect from the get-go. The Sagaponack residence that appears on these pages is the result of the collaboration between just such a client, a music-industry executive, and the formidable team of architect Michael Lomont and designer Eleanor Donnelly of Bridgehampton-based Stelle Lomont Rouhani Architects and landscape architect Christopher LaGuardia of Water Mill.

Lomont, an eco-friendly modernist who believes in understated structures, set out to create an energy-efficient house that would sit quietly in the landscape. “We try to make smaller-footprint buildings that feel bigger than they are,” says the architect, who himself lives in Sagaponack and understands its topography, history, climate, and light.

The client had bought two acres of farmland bordered by black walnut, blue spruce, beech, and cherry trees, which make the property “very private, almost like a walled garden,” Lomont says. In a nod to weathered farm outbuildings nearby, the architect designed a simple, two-story rectangular house with a flat roof and horizontal, charcoal cedar siding that “gives it less of a presence.” Virtually hidden from view are solar panels, geothermal pumps, and the garage’s eco-roof, which is planted with low-maintenance succulents.

Working with LaGuardia, Lomont sited the house close to the road on the northern edge of the property, partly to save a majestic old maple, but also to create an expansive vista to the south, encompassing a greensward and, beyond it, a meadow punctuated by an allée of preexisting apple trees. The swimming pool was pushed to the east, so as not to obstruct the prospect of the meadow from inside the house.

“The design is more like a pavilion, with sliding glass walls that completely open up the interior,” Lomont says. “A big part of the house is its indoor-outdoor aspect, and the way it continues into the landscape.” Aside from birdsong, that landscape is unbelievably quiet, thanks in part to the size of the property, but also to the garden’s three fountains, which mask the sounds of traffic and neighbors. “When you have multiple sources of noise, fountains mitigate them.”

Like many houses, the private quarters occupy the second floor, while the ground floor is relegated primarily to public areas. The latter is largely open-plan, with enfilades along the home’s northern and southern flanks, which allow for what Lomont calls “vista corridors”—views that lead through the house to the outdoors. Adjacent to the spacious, pristine all-white kitchen (even the coffeemaker is hidden in a nook, there is so little clutter) lies the heart of the house: the open living and dining area. It features crisp white plaster walls, rift-sawn white oak floors, and a pale palette that serves as a subtle backdrop to the client’s art collection, which includes fine-art photography and paintings by Ed Ruscha and Richard Serra.

For the decor, Lomont collaborated with Donnelly, an Irish-born architect who runs the interiors department at Stelle Lomont Rouhani. “We speak the same language,” says Donnelly, who incorporated many custom pieces, such as the Lomont-designed black walnut dining table and a steel sideboard and fireplace surround that she designed and had fabricated by Battle Iron & Bronze in Bridgehampton. “Our client wasn’t afraid to have dark elements inside,” Lomont notes. “Not everyone would do that.”

Most of the rest of the furnishings are either vintage, sourced from local shops, or new, from vendors such as Knoll, Minotti, and Liaigre, all in muted tonalities. “Gray and white—that’s kind of our happy place—with a few colorful accents,” Donnelly says. “Everything in this house is very considered, and the project went so smoothly because we were the architect, the general contractor, and the interior designer. We’re like the family home team, and it works well because there are not a lot of players.”

A version of this article appeared in the August 15, 2016 issue of HC&G (Hamptons Cottages & Gardens) with the headline: Orchard House.