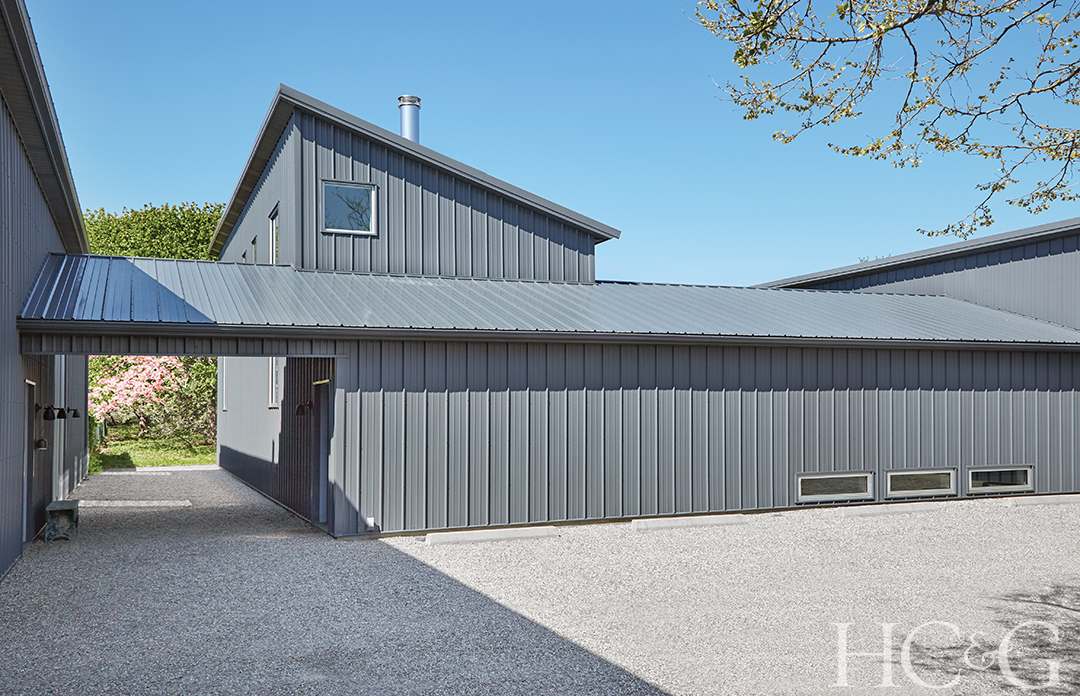 The story of a house is invariably tied to the people who inhabit it. In the case of this custom utilitarian-chic home in Bridgehampton, the cast of characters includes an extended family of theater, film, and TV folk whose careers and private lives have been intimately connected for decades. The main house is inhabited by Tony-winning actor Ron Rifkin and his wife, Iva, a former Broadway dancer whose credits include the original production of My Fair Lady. Playwright and screenwriter Jon Robin Baitz, many of whose lead characters have been tailor-made for Rifkin, inhabits its guesthouse with his husband, Leon Avelino, a publisher of graphic novels and a major advocate for LGBTQ seniors.

Next-door neighbors include Hollywood director-producer-actor Ken Olin and his wife, actress Patricia Wettig, on one side, and Broadway director Joe Mantello and his partner, menswear designer Paul Marlow, on the other. It’s no coincidence that Olin was the executive producer of ABC’s popular series Brothers & Sisters (2006–2011), created and written by Baitz and featuring Rifkin and Wettig in the cast, along with Sally Field and Rachel Griffiths. And Mantello is Baitz’s ex. All three houses were designed by artist Jack Ceglic, whose home and studio were featured in HC&G’s “Artists & Collectors” issue in 2013. The Rifkins have known Ceglic, a founder and designer of the Dean & DeLuca stores, since 1966, when Ron bought one of Ceglic’s paintings as a gift for Iva shortly before they got married. 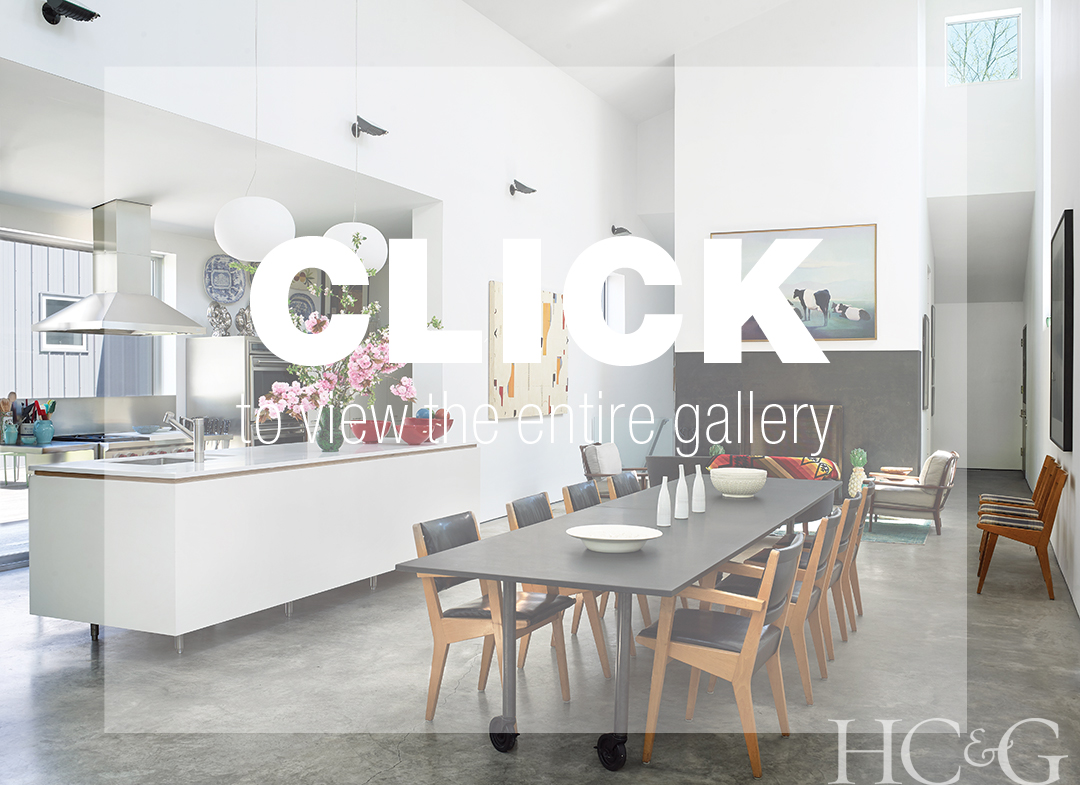 The idea of creating a compound for like-minded theater-world souls originally came from Mantello, who had been living in Sag Harbor for years and loving it, but was beginning to pine for more open space and someplace quieter. A real-estate agent told him about an unusually private tract in Bridgehampton, which he rejected after seeing the property on a rainy day, only to be dazzled by it in the sunshine on a second visit. As it happened, an adjacent parcel was also available. He contacted Rifkin. “We went out on the bus,” recalls Rifkin, “took a look, and said yes, just like that.” Baitz wanted in, too, so he and the Rifkins bought it together. And when a third adjoining lot went on the market, Olin and Wettig came aboard, assuring peace, quiet, and artistic compatibility.

Each house in the compound, like Ceglic’s own home in East Hampton, is a hybrid of urban loft and local barn vernacular, made of inexpensive standard-issue building materials: enameled steel, off-the-shelf aluminum windows and garage doors, concrete for floors and partition walls. Indoors, there are creature comforts, like radiant heating, inviting fireplaces, and chef’s kitchens. While seeming utterly basic at first glance, the structures’ deeply considered proportions and light-catching fenestration reveal Ceglic’s deft hand and eye.

The Rifkins’ 4,200-square-foot residence consists of two parallel barnlike structures attached by a long gallery with a deck on one side and a parking courtyard and pool on the other. One portion contains two en suite bedrooms and a library with its own little deck; the other is a single open volume that’s 50 feet long with 20-foot ceilings. It has two seating areas and a stainless-steel kitchen bumped out between them.

“The envelope is very simple, so that the interior can be filled with personal things,” says Ceglic, who collaborated with architect Junichi Satoh on the project. “That way, the rooms don’t detract from the art or furniture.”

It couldn’t have been a more ideal canvas for the Rifkins, who love to collect and display paintings, furniture, and ceramics. “We were in L.A. when the furniture arrived at the house,” Rifkin remembers. “Jack had tried to set it up, but he called and said he really needed us to do it. It’s not that he couldn’t, it’s that he wanted us to do it our way. Then he’d make comments and point out certain things we needed to buy.”

Ceglic did help them install some of their art. “We bought a collection of 12 Sally Gall photographs, and I just had no idea how to hang them,” Rifkin says. “Jack came over and in two seconds made a little diagram, and that’s how we hung them, in the corner of the living room.”

The kitchen is Ceglic’s favorite part of the house. Laid out to suit Iva, the establishment’s head chef, it comprises freestanding professional units instead of built-ins. “Using pieces that look more like furniture adds to the open feeling of the whole space,” the designer says. The “dining area” chez Rifkin consists of a long table on wheels, which can accommodate the couple’s extended theatrical family and more. “Just after we moved in,” remembers Rifkin, “we had a prenuptial party for [actors] David Marshall Grant and K. C. Reischerl.” And then there was the dinner party that ended up in a group portrait: “There were 10 or 12 people, including Eric Fischl. He asked if we would all gather again the next day so he could paint us, and we did.” But if the communal moments are celebrations, the group also relishes the opportunities for solitude. “I remember the glory of being snowed in there over a week during a blizzard,” reminisces Baitz, “just me and my dog, locked in with a fire.”

Inevitably, time brings change, and sadly, the idyll is coming to an end. Iva’s failing health has confined her to a nursing facility in Manhattan, where the Rifkins have an apartment, and Ron visits her every afternoon. Baitz is now spending more time on the West Coast, and so he and Rifkin have decided to sell. The house will need a special buyer, though, one who will be acquiring not only a new home, but also some exceedingly talented neighbors. Not to mention a lovely slice of American cultural history.

A version of this article appeared in the July 1, 2018 issue of HC&G (Hamptons Cottages & Gardens) with the headline: Dramatic Impact.