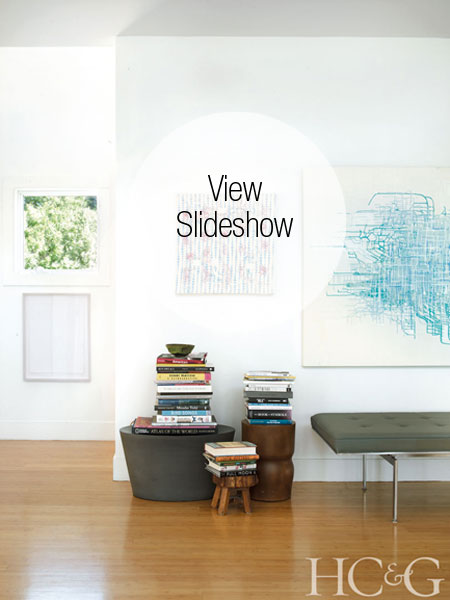 People end up living in the Hamptons for all sorts of reasons. For fine art and commercial photographer Philippe Cheng and mixed media artist Bastienne Schmidt, the hunt for an airy loft space in New York City led unexpectedly to the construction of a brand-new house on an open field in Bridgehampton. Building a home from the ground up “was the farthest thing from our reality,” says Cheng, a native New Yorker. “But sometimes, not knowing what you’re getting into works to your benefit.” The payoff for Cheng and Schmidt: a light-filled house with an adjoining studio, where the couple has happily combined work and family life for more than a dozen years.

“It was either this or a two-bedroom apartment in New York,” Cheng says of the 4,200-square-foot residence. While they “never really gave much thought to moving somewhere else” other than the city, “looking back, I think we did a lot of things based on what felt right.”

In 1998, when Schmidt was pregnant with their first son, the desire for a live/work scenario propelled their search beyond available lofts in Manhattan, and the need for light and open space brought them to the Hamptons. When they happened upon a sun-kissed piece of land on Butter Lane, close to the village and on a flag lot abutting a protected reserve, they “fell in love,” says Schmidt, despite their lack of experience with the building process. On the day of their closing, the couple sat at the Candy Kitchen in Bridgehampton and sketched out ideas for their future home on a napkin. “We wanted something very simple, almost a box, that captured a lot of light,” Cheng says. “Light is so important to us,” Schmidt adds.

The next step: Hiring an architect to bring the barnlike structure they envisioned from napkin to reality. Cheng had photographed Manhattan-based architect Joshua Davis’s wedding and approached him to do the job. “When you photograph someone’s wedding,” Cheng says, “there’s a level of intimacy that lends itself to having honest discussions about life and a free flow of ideas. Joshua understood what we were looking to accomplish.”

Knowing his clients on a personal level gave Davis a deeper understanding of their dream house: “They’re so peaceful and open themselves as people,” he says, “and they needed a home that reflected their personalities.” Davis created a structure that evokes the architecture of both a barn and a saltbox, with two “distinct but interrelated masts,” one the husband and wife’s shared studio building and the other the family area, with bedrooms upstairs and the common rooms below.

The studio encompasses three floors, including the basement, which functions as a rough painting studio for Schmidt. Her works, which have been exhibited internationally and are included in the collections of institutions such as the Museum of Modern Art and the Victoria and Albert Museum, begin on that level and graduate to her finishing studio on the top floor. Cheng, who is currently at work on a book entitled Still, The East End Photographs, lays claim to the ground floor. The couple’s artwork is on display throughout the house, although that hasn’t always been the case. “There wasn’t anything hanging on the wall for the first six years,” says Cheng. “It was all white walls. Then we put in one nail to hang something up, and suddenly there was an explosion of hanging—almost instantaneously!”

Having their studios at home has amplified the couple’s creative output, with their beloved natural light bathing the interiors throughout the day. The back of the house features walls of folding glass doors that look out on the open fields beyond; the front of the house, which faces Butter Lane, is punctuated with small square windows that capture strategic glimpses of the landscape outside. “Even in the winter, we rarely turn on the lights,” says Cheng. The furnishings are equally cheery, with multicolored Knoll chairs and bed linens from Calypso Home adding to the brightness and the casual atmospherics. “We like splashes of color—red or yellow as a focal point here and there, minimalist but warm,” says Schmidt.

That sensibility prevails even in the kitchen, which is “clean, organized, simple—but really fun,” Schmidt adds. One of the things she and Cheng love most about living on the East End year-round is the easy access to fresh food and quality ingredients, which has only enhanced their love of cooking at home. Their sons—Max, 14, and Julian, 11—walk across a path cut in the field to school each day, where an edible schoolyard has given them “an appreciation for different flavors,” Cheng says. “It’s just another example of the serendipitous things that have happened while we’ve been living here.”

A version of this article appeared in the July 1 2013 issue of HC&G (Hamptons Cottages & Gardens) with the headline: Live + Work.