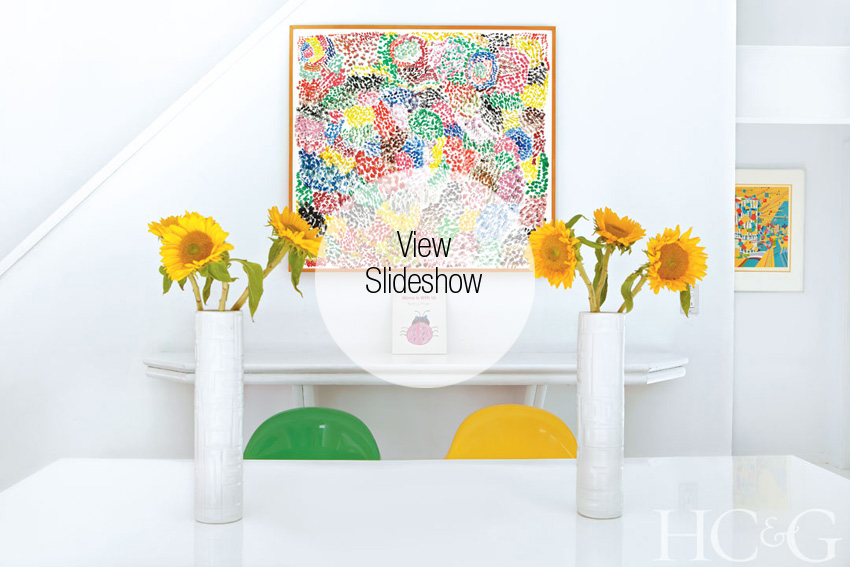 To many Hamptons homeowners, the archetypal 1980s modern saltbox rarely requires more than hyper-streamlined interiors and minimal landscaping, but to Joseph and Mireya D’Angelo, personality counts most. When they bought their property on a wooded lot not far from the hubbub of East Hampton, the couple was determined to transform it into a place where family and friends would congregate for impromptu barbecues and dinner parties, enjoying food from local farm stands and markets and Long Island wines.

For years they had rented houses in various Hamptons villages, but when they decided to buy, in 1999, they focused their search in East Hampton’s Northwest Woods, with its relaxed atmosphere and easy proximity to beautiful beaches. First and foremost, they wanted to imbue the home with a fuss-free, happy vibe. Designed by architect Frank B. Hollenbeck in 1984, the house measures approximately 2,400 square feet, which the D’Angelos intended to keep mostly bright white, “except for the art,” says Mireya D’Angelo. “But then one day my husband said, ‘I think we should have an orange sofa,’” and the couple never looked back.

Their first step was to whitewash the interiors, including the natural oak floors and the decking around the pool. Even a shed in the backyard was transformed into a whitewashed pool house complete with a half bath and living area. With four bedrooms (one has been converted into a den), the house is blessed with wonderful light throughout the day, making it a serene, sun-filled retreat that provides a sense of balance for the busy Manhattan-based family. Joseph D’Angelo, an attorney, is a senior principal at a real estate private equity firm, and Mireya, also an attorney, specializes in business consulting. As if that weren’t enough, she is also an instructor at Soul Cycle’s East Hampton, Bridgehampton, and Manhattan studios. Daughter Sofia’s schedule is just as hectic: In addition to being an accomplished equestrienne who competes in show jumping, she will be singing the national anthem at the Hampton Classic for the second year in a row. As Mireya says, “With all the activity in our lives, we need to retire to a calming space.” But back to that orange sofa: Despite the soothing, white environs, the place is not lacking for pops of energetic color. The family loves to collect art and has hung many pieces by friends in addition to purchases from local galleries and fund-raisers. The Michael Manning work above the fireplace was acquired at a benefit auction for ArtRageous. “We love the color, size, and its abstract nature,” says Mireya. A photograph by the D’Angelos’ close friend Debby Hymowitz, Beach Path to Happiness, has extra sentimental meaning, as it depicts a beach in Positano, “one of the places we went on our honeymoon.” While walking down Park Avenue one day, Joseph spied a digitally manipulated photograph by Rudy Ernst, which now holds a prominent position above the stairwell.

The dining area, too, started out all white, with a custom white Formica table and chairs, but then the D’Angelos upgraded to a suite of colorful original 1970s Panton chairs at a local tag sale. A vibrant artwork by Don Francis, spotted by Sofia at the Guild Hall Clothesline Art Sale, further punctuates the space.

Sofia’s bedroom is just as colorful, filled with ribbons she has won on horse-jumping competitions. “She has been competing for about seven years,” Mireya says proudly, “and wanted to display the ribbons she won. They now cover two walls in her room and are encroaching on a third!”

A graphic black and white color scheme characterizes the den, where accent pieces include the photograph Waves of Stillness, “a birthday present for Joseph,” Mireya says, and a set of Calder prints that once hung in Joseph’s father’s old office. Despite the seemingly adventurous experiments with color, though, the house’s overall style is ultimately “classic yet simple, with a modern flair,” Mireya adds. “It is our sanctuary, and it makes us happy whenever we are here.”

A version of this article appeared in the August 1 2012 issue of HC&G (Hamptons Cottages & Gardens) with the headline: Bright Ideas.