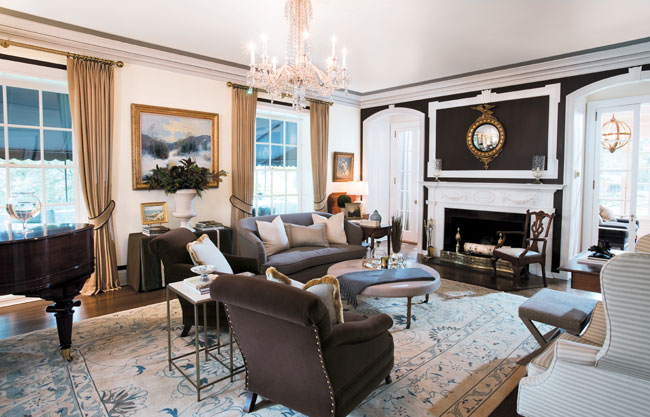 Susan Bednar Long rose to the challenge of resurrecting the Residence’s living room. Disjointed and uncomfortable, “like a tired hotel lobby that was once grand, the room had lost nearly all of its charm over time,” she says. A self-proclaimed “modern traditionalist,” the Greenwich-based designer, who was born and raised in Connecticut, took color cues from the legendary decorator Bill Blass’s New Preston home. “I used masculine colors, such as charcoal, brown, camel and cream and hints of blue,” she says, “to emphasize the room’s good bones, like the ornate moldings and the fireplace.” The deep-chocolate contrast wall and graphic lines that continue along baseboards and above doorways—plus the gray detail around the ceiling perimeter—create a modern variance that offsets the busy-ness of the traditional millwork and highlights previously overshadowed antiques. 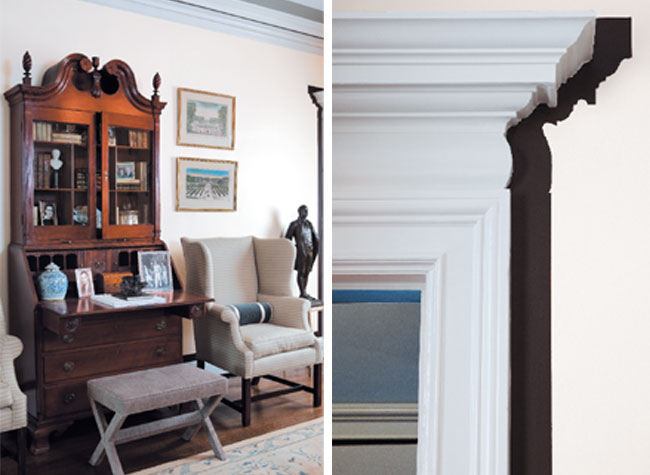 “Since the room is used for official state gatherings, ease of flow into the sunroom and an open, inviting plan were important to the Malloys,” says Bednar Long. Wingback chairs and a Chippendale secretary have moved to the opposing wall for counterbalance. A reupholstered loveseat, along with two custom-made mohair club chairs, a custom ottoman and a new rug now form a more intimate arrangement in front of the hearth. The result? “Though dignified, the room has an undeniable simplicity. It has a warmth and classicism that makes everyone feel well received,” says Bednar Long.

This article appears in the November 2011 issue of CTC&G (Connecticut Cottages & Gardens).