Take a Tour of a Litchfield County Home Brimming with Personality 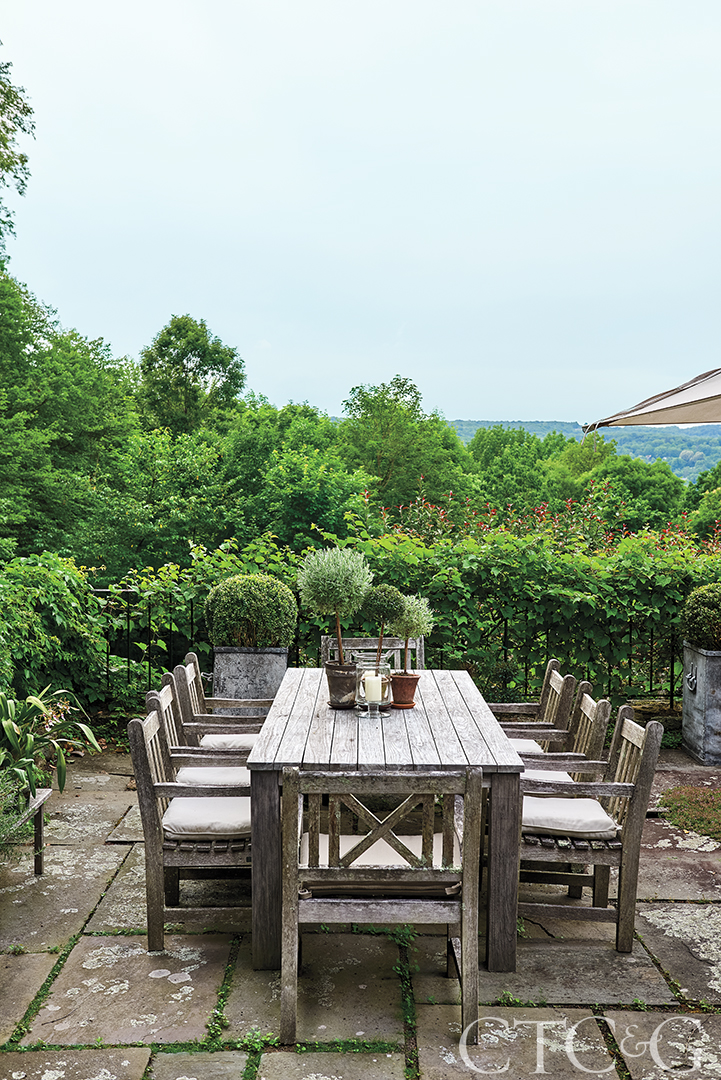 Every room in the home of Bruce Glickman and Wilson Henley has its own personality. For the dining room of their 1930s gabled cottage in Litchfield County, they had a new wood ceiling applied. They called in a noted artist and painter, Matt Wood, who erected a scaffold, and “not unlike Michelangelo, he started to paint the wood,” notes Glickman. “But his job was to distress the surface,” adds Henley. So the artist “banged it and beat it and distressed it and scraped it until it looked old, but interesting,” says Glickman.

Elsewhere in the house, into which the couple moved in 2012, they had square-motif paneling added to the living room walls, an Oriental rug and multi-lamp chandelier were put in the master bath, and unlike any other interior space, the walls of the guest bedroom were adorned with a large patterned wallcovering that reaches high along the gabled walls. 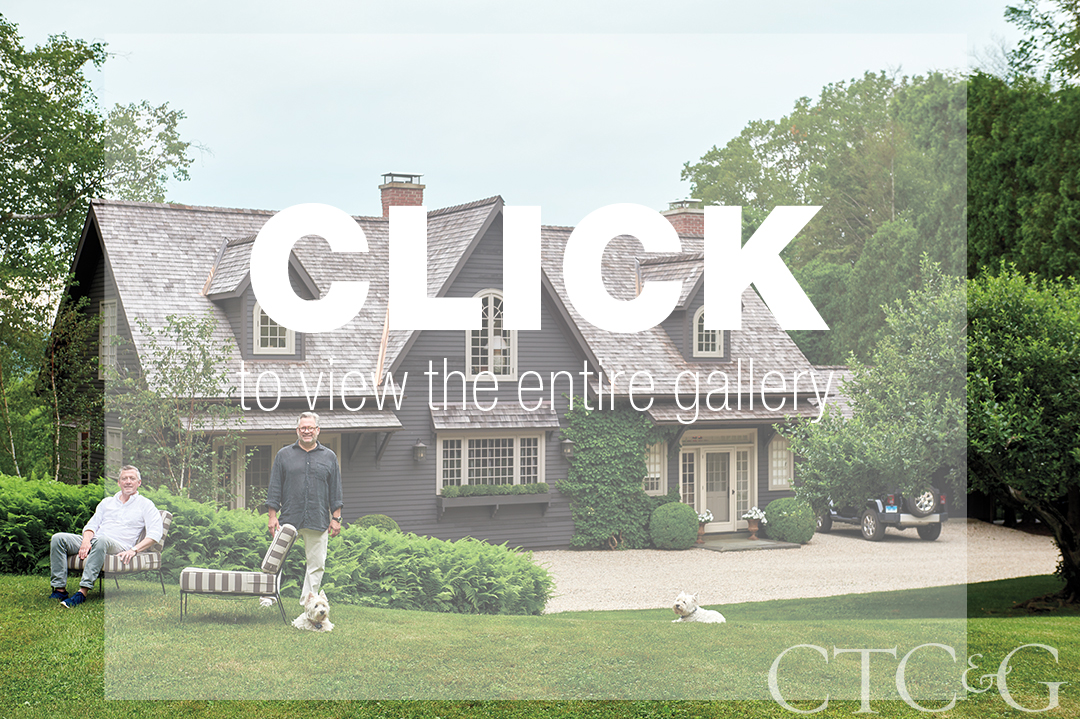 “As we approached every room, we wanted to add something to each to give it style and make it individual,” Glickman says of their approach. The couple once owned Duane in New York City, a sought-after source for midcentury pieces; now they own George Home, a shop in Washington Depot that sells everything from period furniture and antiques to new glassware and dishware. “People up here aren’t always looking to buy furniture on Saturday afternoons,” says Glickman, “so we have basic things on hand, too, like candles that people can buy on the spot.”

The couple understands the effect that antiques can play in a home—not just as decorative elements, but also practical ones that can determine the mood of a room. “The moment we moved in,” says Henley, “we started exploring the idea of mixing traditional elements with midcentury ones. It turned out to be a happy accident.” A glance in any room reveals their penchant for combining eras. Their breakfast room, as much a living space as a dining one, is equipped with English wingback chairs, an oversized contemporary lamp, and 1950s tables and stools. “Wherever you go in our home, the furniture of different periods is having a spirited conversation,” notes Glickman. Henley adds, “As we updated each room, we tried to add as many antiques and antique elements to the surfaces, so that it had even more charm than it started with.”

Their affiliation with Litchfield County is a long one. They lived and worked in Manhattan, but always had a weekend house they either rented or purchased in the region. They cite a residential history that includes, among others, a 1740s farmhouse, followed by a clean midcentury Modern, and now this picturebook-perfect country cottage with its many steep gables, multipaned arched windows, and deep dormers. In other words, Glickman and Henley know what they’re doing. “We’ve done this before,” says Glickman, not with a jaded voice, but, rather, an excited one. “Fixing up a house is a very easy process for us.” For this project, they had a few interior walls taken down, they pushed out the kitchen by eight feet, and changed some floors and windows. “The house was not in bad shape when we bought it,” he emphasizes. “We simply made it into a better version of itself.”

The grounds, however, were attended to more dramatically. The couple installed an in-ground pool, bracketed by a vigorously articulated stone wall, portions of which echo those that support a terrace off the living room. “We were driving in the area with a real estate agent when we told him to stop for a moment at this house. We took one look at the view of the hills from that terrace and we were sold on it,” recounts Henley. A graveled motor court—the term alone evokes the house’s 1930s/’40s era—was fashioned at the front, delicate wrought-iron gates and trellises adorn outdoor areas, while planters contain perfectly coiffed boxwoods.

“The best way we describe our home is that it’s a happy sight for us,” says Henley. “We’re always happy to come home, and we’re always taking in what you get in Litchfield County—big sunsets, big skies, storms coming over the hills. It’s pretty magical here.”

A version of this article appeared in the May 2019 issue of CTC&G (Connecticut Cottages & Gardens) with the headline: It's Got Personality.