Take a Tour of a Revamped Greenwich Village Pad 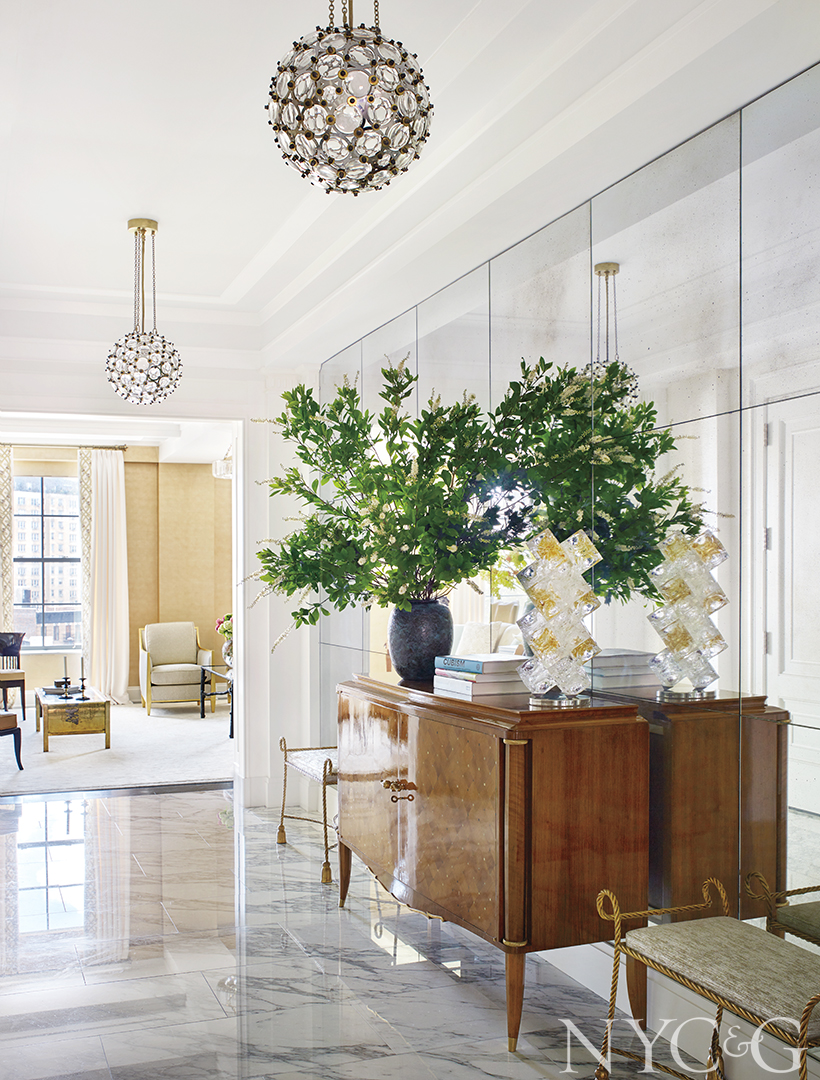 Every project begins with a single object. When interior designer Alyssa Urban and her client came upon a 10-foot-long, acid-etched brass-topped dining table with tantalizing agate insets at Newel, one of New York City’s top antiques purveyors, they were smitten. “After we decided to purchase the table for the apartment,” says Urban, referring to her client’s four-bedroom condo in the Greenwich Lane, on the grounds of the former St. Vincent’s Hospital in Greenwich Village, “we knew that it was going to set the pace for the space overall.” At once glamorous and practical, exuberant and restrained, it’s “one of the very best pieces in the apartment, the right thing to start with.”

Construction on the Greenwich Lane—built by architects FXCollaborative, with interior finishes by decorator Thomas O’Brien—had been completed and the floor plans established when Urban’s client and her family bought their unit. But she and Urban, who is a design partner with Cullman & Kravis Associates, hired architects from Ferguson & Shamamian Architects to make some key changes up front.

The ceilings throughout the spacious apartment were unimaginative, even oppressive in their plainness, so Urban and the architects fashioned faux beams for the living room and master bedroom and created layered, telescoping recesses elsewhere, particularly in the family room. “The process started as a no-big-deal kind of thing,” Urban notes, “but suddenly we were forced to round up all sorts of city permits to do the work. The delays proved to be the biggest challenge.”

Once they got the green light, Urban and her client got going on the decor, with a mission to create an elegant, yet family-friendly abode that could handily accommodate the client, her husband, and their three active young children. For the large open living/dining room, they chose a Gracie wallpaper with a coppery, rosy metallic glow that imbues the space with richness and warmth. “The wallpaper makes the room come alive,” Urban says, adding that artwork picked up on buying trips to Art Basel and the Frieze fairs lends sophisticated grace notes throughout. “Both the art and the furnishings offer something young and fresh, balancing the apartment’s traditional lines.”

The combined family room and kitchen, anchored by a terrace and a wall of handsome square windowpanes, is kicked up with a palette of bold oranges. And in the master suite, pink prevails, from a sexy pink dressing chair and shimmery silk throw pillows to artwork specifically chosen for its pinkish tonalities. The client has a penchant for all things pink, Urban explains, and also loves “curvy, feminine forms. She and I definitely taught each other a thing or two along the way, and that’s what has made this project a success.”

A version of this article appeared in the May/June 2019 issue of NYC&G (New York Cottages & Gardens) with the headline: Dramatic Impact.