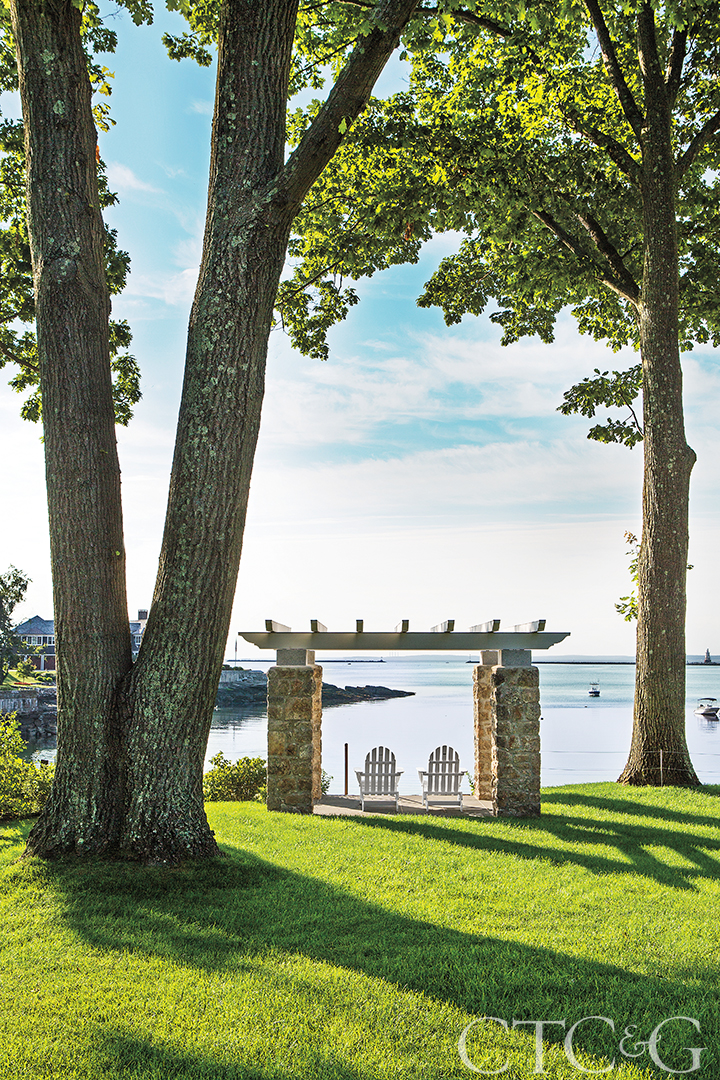 If houses were people, the residences along the coastline in Old Greenwich would likely be written up in a who’s who of classic architectural designs. Tudors, Jacobeans and, of course, the venerable Colonial are among the long-standing home styles that define the area, and a young couple with a growing family preparing to build on a lot with views to Long Island Sound were intent on fitting in, sort of. “They wanted a traditional Colonial but with a fresh twist,” says interior designer Saranda Berisa, who along with architectural designer Dinyar Wadia, would craft a domicile that saluted the local vernacular while factoring in the youthful exuberance and modern leanings of its occupants.

At first glance, the building Wadia designed in collaboration with Wadia Associates architects Robert Butscher and Rob Lominski is clearly rooted in history. Classic pillars and a trio of arches at the entry handily make the case. But the white brick and gray slate imply something else. “I call it a shore colonial,” says Wadia about his fresh version that acknowledges its seaside locale. “It isn’t at all stodgy, and the house uses traditional forms to convey a crisp, modern feeling.” 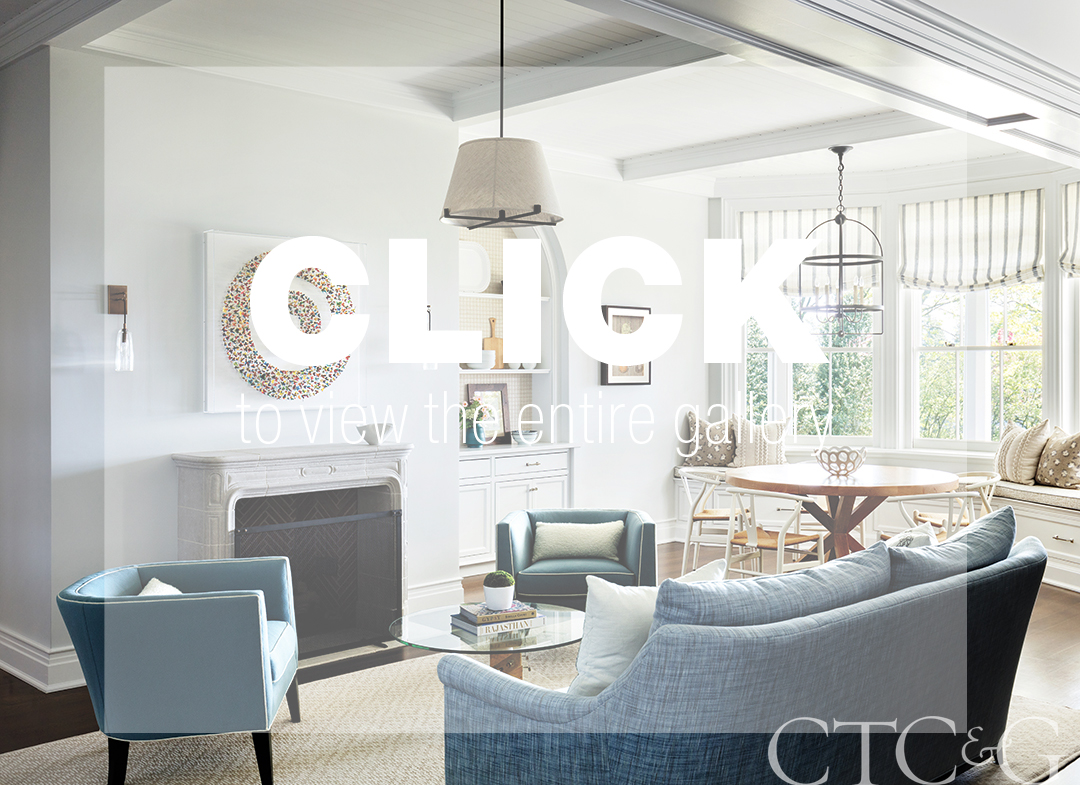 The subtle juxtapositions of old and new outside give way to a stylistic balance inside where rustic wood floors meet precisely detailed white interiors, and contemporary furnishings and a modern art collection selected in conjunction with Studio M push the envelope even further. “The first thing you see is the reclaimed chevron patterned wood floor paired with a glass and metal Holly Hunt bench,” says Berisa. “There’s an immediate merger of past and present.”

That concept continues in the living room, where the melding of a rolled arm sofa, a glass coffee table, midcentury modern inspired metal frame chairs, and a contemporized version of a Sputnik chandelier set amidst a backdrop of classical moldings could easily have become a mash-up gone awry. Instead, in Berisa’s capable hands everything just falls into place. Even a pair of alpaca-covered slipper chairs meant to bring a hint of Hollywood glam hits the mark.

Throughout the house, it’s pattern and texture that binds. Despite pushback from the clients who said no to anything floral, embroidered cherry blossom cushions on the bench next to the staircase made the cut. “It just had to be the right floral,” says Berisa, whose inclusion of things like the deconstructed Greek key design on the living room rug, marquetry stenciled floor in the master bathroom, and layering of a sheepskin on a wool area rug in the guest bedroom drove the fresh aesthetic. “The intent was never to say goodbye to traditional roots, but instead to leave behind the brocades and heaviness of velvet in favor of something lighter and more fun,” says the designer. “I call it classic eclecticism.”

In the family room, where grouping cushy white upholstered seating with a vintage goat skin coffee table and gold leaf chandelier keeps things from getting sedate, the navy and white plaid rug—“not your grandmother’s plaid” Berisa is quick to note, further elevates the space. And things escalate in the dining room, where a Pop Art Roy Lichtenstein hanging above a pair of ottomans covered in houndstooth fabric tucked under a sleek Lucite shelf signals this isn’t your grandmother’s dining room either. “This is where they really entertain and they didn’t want anything conventional,” says Berisa, who secured the cool, youthful vibe with metal frame chairs around an Armani table, and punctuated the space with cowhide host chairs.

In keeping with the transitional mood, the architectural design team proposed a cerused oak ceiling—a modern version of the Italian palazzo inspired version originally requested by the owners. “They came to me with a picture of a heavy dark wood ceiling, and when I showed them my drawing, it took all of five seconds for them to realize this take was better,” Wadia shares.

According to Berisa, throughout the process, the owners remained heavily engaged by bringing images to illustrate ideas to the table, making art selections and adding in items from their travels. “I call it the soul house because it’s full of who they really are,” the designer says. “They are a savvy young couple, and who they are comes through 100 percent.”

A version of this article appeared in the June 2019 issue of CTC&G (Connecticut Cottages & Gardens) with the headline: Rooted in History.