Taming a Riot of Color is Anthony Baratta’s Specialty, as Shown in this Stratton, Vermont, Retreat 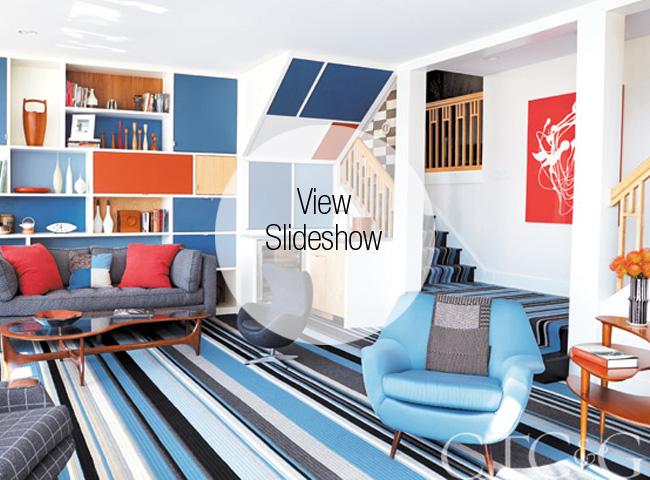 Life in this uphill house is all about conquering the surrounding hills. For their second home, situated mid-slope in Stratton, Vermont, a New Canaan couple wanted to be able to open their kitchen door and slalom to the postcard-perfect village below.

And while they could easily cozy up by a roaring fire après ski in one of the resort’s lodges, they wanted their own residence to be the place where their friends and four children gather. When Anthony Baratta, principal of his namesake Manhattan firm, and senior designer Ashley Lempka, were commissioned to do the interiors for the home (two co-joined condominiums), the rooms were as bare and white as newly fallen snow. “The homeowner, who is without question the most genuinely stylish woman I know,” says Baratta, “brought along a scarf and said she loved its palette of colors.”

“She wanted us to use those hues in the interiors,” adds Lempka, “but it was eerie how Tony and I had already picked out that exact palette for the rooms of the house.” Greens, blues, deep plum, burnt orange, along with soothing neutrals, were chosen by both the designers and client for the five-bedroom home.

After guests shake the snow from their boots, they enter the living room via a staircase that leads down. There, they encounter a room that is definitively Baratta. “People always say of our work that there are so many patterns and colors and, yet, they all harmonize so well,” says Baratta. “I just think it comes down to the fact that we have so much experience with this approach to our designs that it always works out. It’s about instinct and experience.”

That is not to say, however, that there is anything repetitive about Baratta’s work. “Our goal for this particular project was to mix a midcentury-modern approach with Mondrianesque comes down to the fact that we have so much experience with this approach to our designs that it always works out. It’s about instinct and experience.”

That is not to say, however, that there is anything repetitive about Baratta’s work. “Our goal for this particular project was to mix a midcentury-modern approach with Mondrianesque motifs, along with traditional American design, including folk art and quilt patterns. She wanted us to be fun, clever, creative.” Adds Lempka, “The house is a complete visual treat—and it’s warm and comfortable.”

The dining room incorporates an ethereal blue on wooden Cherner chairs and one wall. “When working on this house, I kept envisioning snow on the ground, and I like the blue and white combo,” says Baratta, adding that a few pops of evergreen outside only heighten the effect. In keeping with his penchant for a modernist aesthetic, he encased a custom Sputnik chandelier in a glass box as a bold sculptural statement.

On the opposite side of the room, Baratta positioned a tall cabinet he had faced with an arresting checkerboard pattern. About a collection of American pottery that rests atop it, Baratta says, “I’m a little allergic to just buying accessories to put in rooms, so Ashley and I slowly assembled those pieces. We built a small collection over time for the clients. You could call it curated.” Apart from a rug that references a Lucienne Day design, Baratta kept the fumed-oak laminate floors bare, since the material can stand up well to people tromping through in ski boots—likely on their way to the kitchen, with its stone fireplace and two islands painted an inky blue.

A version of this article appeared in the February 2015 issue of Connecticut Cottages & Gardens with the headline: Living the High Life.

This article appears in the February 2015 issue of CTC&G (Connecticut Cottages & Gardens).

A Delightful Kitchen in a Darien Spec Home