Celebrating a favorite holiday abroad has challenges and rewards all on its own. 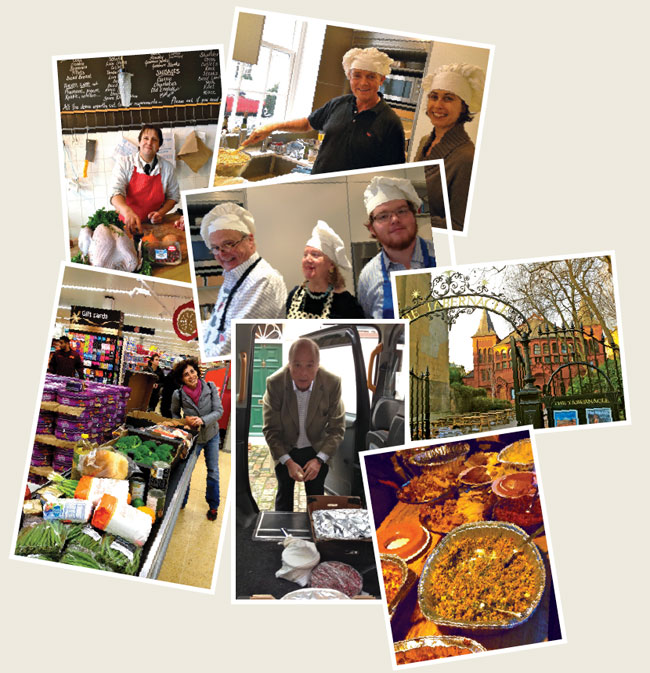 When my three grown kids moved to different cities on two continents, celebrating Thanksgiving together became impossible until we turned our favorite holiday into a weekend-long destination event. Preparing this feast in a foreign city presents challenges, so along with recipes, measuring utensils and any uniquely American fixings, it’s vital to pack a sense of humor and healthy dose of flexibility.

Last year, our group ballooned to 60—mostly friends of my daughter Nicole, who works in London, plus far-flung family friends. When our rented home, with its American-style kitchen, turned out to be furnished with priceless antiques, white carpeting and a single loo on the second floor, panic set in. After checking out local pubs, sports clubs and church halls, we discovered the Tabernacle in Notting Hill. Originally a Mormon church, it’s now a community center. The facility is well equipped, but the cramped kitchen made it more practical to prepare most of the meal in the spacious rental-home kitchen and then transport the almost-finished dishes to the Tabernacle in disposable pans to be reheated, plattered and served buffet style.

Experience has taught me that fine markets offer online shopping, so order ahead, ask for a delivery time, and confirm the details once you arrive. Traditionally, the star of Thanksgiving is a plump, bronzed turkey, yet overseas ovens are often quite small. Brooks Butchers’ head butcher Kevin Tidy agreed to roast and deliver our two 25-pound birds according to my recipe. And, true confessions, inside my suitcase were two Bundt cakes, six pounds of raw cranberries (check local import laws before packing), premixed dry ingredients and canned pumpkin for my pumpkin-walnut cupcakes, and a collapsible crêpe-paper turkey.

But prep isn’t social hour. My hardworking helpers included David McMurtrie, head of Google UK’s Publishers Solutions, a very adept cook who arrived with his own food processor and all the fixings for his tasty pâté. Warren and Louise Heenan’s son, John, had just started at St. Andrews, in Scotland, so the whole family came to London from La Jolla. They peeled, boiled and transported pounds of potatoes to the Tabernacle, where John mashed them into creamy goodness.

A nice coda to the Tabernacle’s generosity (the management asked only that we had an open bar so they could derive a profit) was that the leftovers were served to the center’s seniors the following day. Yes, there were some missteps and a couple of missing dishes, but I’ve learned not to sweat the small stuff. Above all, Thanksgiving is about family and sharing good food, whatever and wherever that may be.