Book excerpt from Clarence House: The Art of the Textile-Fabric for the Inspired Home 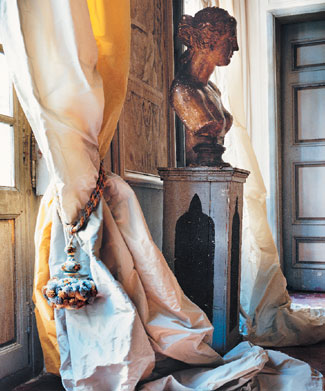 The eighteenth century was a remarkably inventive period during which many beautiful textiles were produced. When I started at Clarence House, I didn’t know anything about the period. I liked contemporary design—always went for something slick and geometric. Seeing the beauty of antique European documents changed my taste.

I’ve really come to appreciate their variety and excellence. The magnificent scale of Baroque damasks. Delicate floral silks that are amazing in a neoclassical room. Pretty cotton prints—toile de Jouy and Indiennes. Chinoiserie—with its whimsical charms. Over the course of the eighteenth century, so much was cemented into our design vocabulary that continues to appeal today.

We try to bring out fabrics that will be timeless. We look through the archives of companies like Ratti, Declercq, Prelle, Bucol, and Etro. But we also go straight to the source, finding hand-painted Chinese silks in China, cotton calicoes in India, kimonos in Japan. We adapted our Madeleine floral from an eighteenth-century Chinese hand-painted silk originally made for export to the West. Everyone went mad for it: celebrities including Kirk Douglas, Diana Ross, Gregory Peck, and Marisa Berenson all took that one home. And Barbra Streisand used it in her apartment on Central Park West. 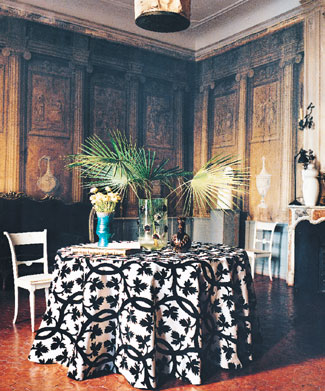 Warp prints, with their ethereal charm, are some of my favorites from this period. Because the fabric is woven after the warp is printed, the patterns become slightly distorted. Even florals created using this method have a life and energy unlike anything else. This technique seems very well suited to fashion—the textiles would make fantastic rustling silk ball gowns. They’re magnificent as curtains, fresh and sophisticated at the same time.

With a damask, you generally have no more than two different colors—one in the warp threads, which are stretched lengthwise on the loom, and one in the weft threads, which are woven back and forth, over and under the warp. To weave a lampas, you have two warps and at least two wefts. You’re able to introduce many more colors because the weft threads can be fed in at intervals rather than running continuously back and forth. We use so many colors in these wild rainbows that you can’t help but be enthralled.

The short Nouveau Bizarre era—just five years around 1700—produced some of my favorite designs. They’re so intricate, the more you look, the more you see. With fanciful flowers and animals like dragons woven into the cloth, they’re not sweet at all. If you didn’t know otherwise, you might almost think they were some kind of contemporary riff on traditional motifs. The lampas we call Nouveau Bizarre was an adaptation of an eighteenth-century pattern. I gave it my own sense of fluidity and a new coloration that completed its success.

Designed to appeal to the European market, chinoiserie blended Asian motifs and Western fantasy. The theme lent itself to fanciful flights of imagination, which were translated into intricate decorative patterns. Chinoiserie was especially well suited for adaptation to the rococo style, which was also playful and expressive.

We take it in ever more whimsical and wacky directions than the original designs. It’s so amusing to render—like creating a set for an opera or ballet or a storybook. You make up all the little characters in their costumes, riding in carriages, lounging around in pagodas.

It’s all about creating a lively chaos—and then taming it. To me, the best designs have a brave scale—and a richly varied palette. That’s why I think I’ve had success with La Vie Chinoise and Grand Tableau Chinois. Meanwhile, a design like Diaghilev captures the spirit of the eighteenth-century patterns in its extravagant follies, but it’s completely concocted from my imagination. It’s destined to be a Clarence House signature.

This article appears in the October 2011 issue of CTC&G (Connecticut Cottages & Gardens).