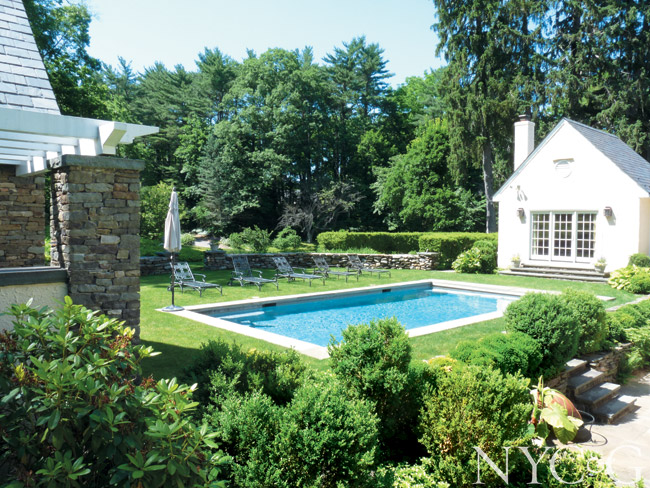 Most pool houses are configured as dedicated four-walled structures, but this new concrete, stone, and stucco pool house, on the grounds of a home in the North Shore, Long Island, town of Matinecock, is one that remains open to its site. “It takes innovative thinking to create an open-air pool house,” says judge Amy Lau, while judge Kerry Delrose admires how the structure’s fireplace “turns this into a three-season gathering space.” Jon Babinski positioned the building on the higher elevation of the sloping site, giving it a secondary function as a retaining wall. Meanwhile, he mapped out the lower-level garden to include a bluestone patio and barbecue area with immediate access to the kitchen and entry foyer. “I just love the way the lawn comes right up to the pool edge,” says judge Liz O’Brien. 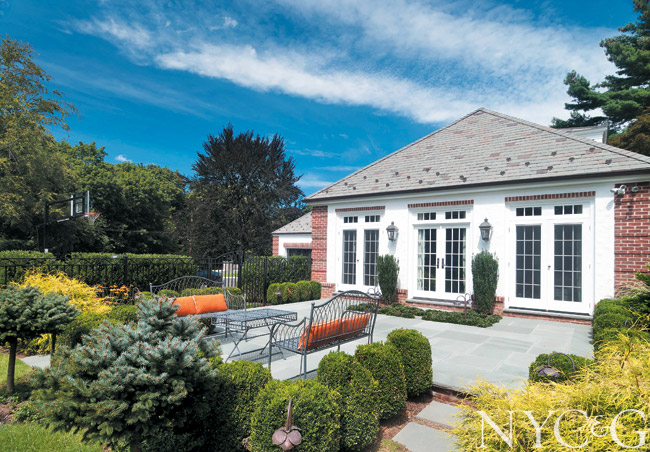 A natural rock ledge appeared to be an insurmountable problem on this site in suburban Harrison, New York—but proved to be a design opportunity instead. Sean Jancski decided to embrace the rocky outcropping with his design for a new pool, pool house, and raised infinity spa. The very shape of the pool, in fact, now echoes that of the boulders, while at the same time appearing edgeless, as if it were a natural water source. Jancski also designed a vigorously articulated, serpentine stone retaining wall, whose sinuous form unites various spaces on the property. Amy Lau calls Jancski’s work “out-of-the-box thinking when it comes to designing a pool—unexpected and delightful,” while judge Ken Smart describes the finished elements as “very tailored.” 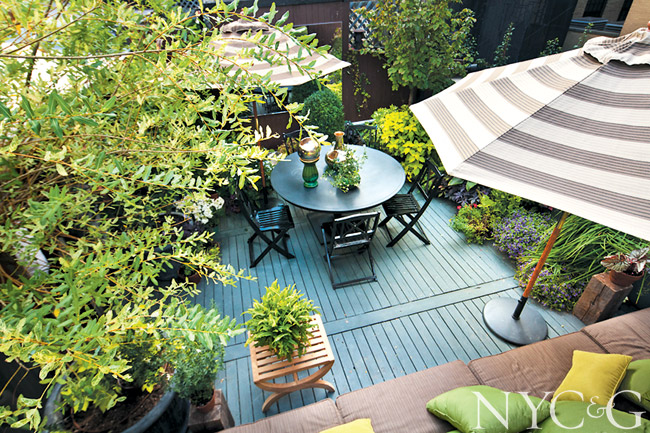 When Glenn Gissler decided to relocate to Brooklyn Heights after 30 years in Greenwich Village, he wasn’t exactly sure what he was looking for—until he beheld two floors of a small townhouse topped by a terrace. But like many raw outdoor spaces, this one was more tar beach than terra firma. “Having never had a terrace or a garden of my own, this was uncharted territory for me,” says Gissler, who worked on the project with landscape consultant Billie Cohen. Together, they created an outdoor room for dining, entertaining, and sleeping by bringing in evergreens and seasonal perennials, along with a large mirror that works to enhance the light, views, and plantings. “We New Yorkers cherish our outdoor spaces,” says Liz O’Brien. “I’m ready for my latte now!” 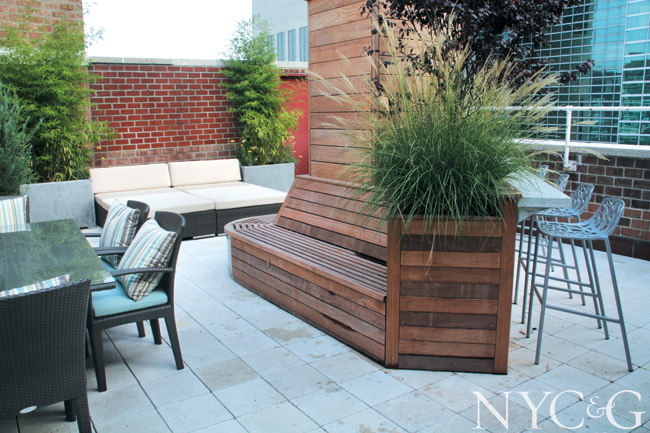 There it was: a big, ugly brick chimney rising in the center of a terrace on a Midtown East high-rise. Focusing on “transforming this frog into a prince,” the designers at Just Terraces clad the chimney partially in wood and added a wraparound bench for seating. Limestone pavers are cool to the feet, reflecting heat in the summer. Family and guests are encouraged to linger in the space now that a dining area, bar, and grilling area are in place. The chimney solution is so convincing, Kerry Delrose says, “It looks like it was always there.” Judge Bunny Williams comments that the designers incorporated “great details that disguise an otherwise obtrusive element.”