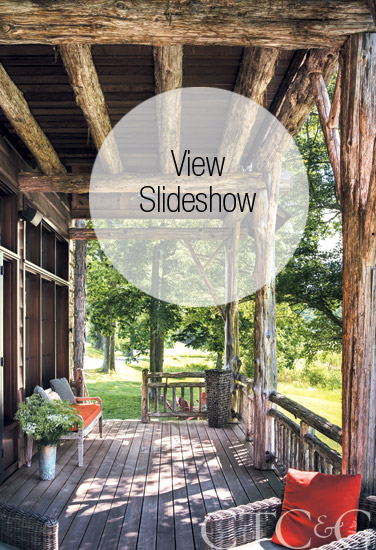 Reese Owens’ clients, a couple with four children, wanted a place built from what the architect calls a “log and twig vocabulary.” Owens, generally a chameleon who can do modernist when his clients want modernist, and classic when they want classic, explored getting as close to nature as possible with this house, nestled lakeside in New Preston.

A series of timber pieces frames a single open living space; the squareness of the beams and columns provide structured visual cues around the wild nature beyond. A master bedroom, a kids’ room (complete with bunk beds) and a kitchen detailed with perfectly articulated reclaimed wood cabinets bring to mind a tiny, rustic and yet thoroughly updated hunting cabin—a directive Owens gave to the clients, who hired New York–based designer Ellen Hamilton for the interiors.

“You study all the same relationship and details,” Owens says of working with this much wood in a relatively simple—yet by no means easy—way. “But you’re working in an entirely different style that is just as challenging.”

The front porch blends the barrier between inside and outside, long a conceptual challenge for architects. “They’re willfully traded here,” the architect points out. For instance, “the edge of the building is a tree instead of a milled post.”

This adoption of nature and re-adoption of wood—the main building material is all reclaimed and re-milled from a variety of regional sources—lends itself to a project that is at once solid and ethereal, homey and conceptually inspired. In this house, Owens has blended the strength of a log and the flexibility of a twig. 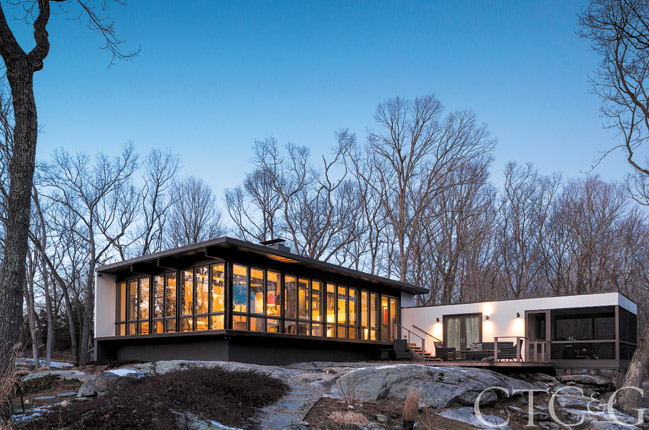 “We wanted the midcentury modern roots to be apparent,” Robert Dean says. “But we weren’t detailing everything as an imitation of what someone would have done in 1959.” The architect is talking about a Wilton house he built twice—once as a restoration of a midcentury modern house, and then the second time as a ground-up build that became necessary after a fire devastated his original project. “Since we were essentially reconstructing every square inch, we didn’t treat it as a restoration so much.” Midcentury modern roots are clear in the square footprints and the walls of glass, not to mention the crisp lines within. Dean married a simple and modern design ethic with up-to-date technology for those glass walls, using small and operable windows that allowed for more airflow and temperature control than true midcentury modern inadvertent greenhouses tend to. Inside, an expanded staircase creates a sense of openness central to modernist tenets and also to the family life his clients wanted. “They’re very appreciative of the art of design,” Dean says of the couple—a magazine editor and his wife, who hired New York–based Carrier and Company to complete the interiors. 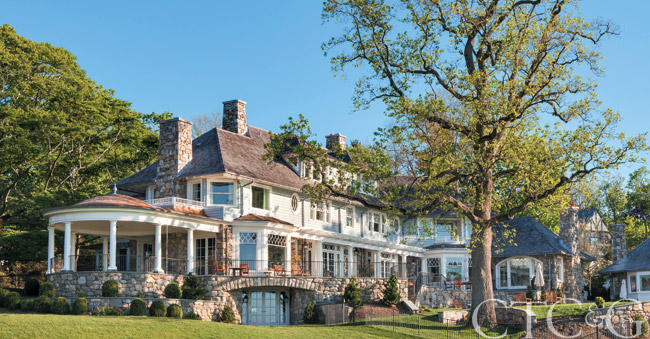 For a waterfront site, Douglas VanderHorn’s clients wanted a brand-new house—that happened to look as if it had been there for years, yet was designed with enough of a contemporary understanding of how families live today that it could work for a bustling crowd. To get a classic look, VanderHorn used “a variety of different techniques—bay windows and other elements—to give us the architectural opportunity for large windows, and lots of them.”

Drawing light into the classically organized and detailed house was a major intervention, as was keeping some of the old trees that grew close to the house. “That really helped the house look like it was settled in,” VanderHorn says. The buildable square footage was somewhat limited, so the architect paid extra attention to the basement, allowing for a walk-out area carved into the hillside that added space without drawing from the overall limit.

The house looks like it was built in 1915, but the technology, though hidden away, is very advanced. Insulated with a spray foam and geothermally temperature controlled, the house uses all eco-sensitive LED lighting and is controlled by a smart-house system that allows for the electrical elements to be operated from anywhere—electrical elements generated by its own gas-fired co-generation system. “Our houses look like classics from the outside,” VanderHorn says, “and yet, they’re very high tech.”

A version of this article appeared in the July/August 2015 issue of Connecticut Cottages & Gardens with the headline: Architecture.

This article appears in the August 2015 issue of CTC&G (Connecticut Cottages & Gardens).