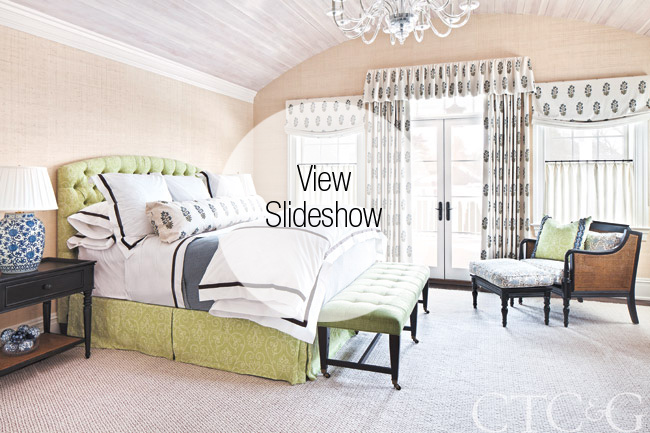 Interior designer Lee Ann Thornton believes that just because a house isn’t on the water doesn’t mean it can’t embody the casual elegance of a beachfront property. And that was exactly the attitude she assumed while crafting the interiors of a new home for a pair of empty nesters in Old Greenwich. “Despite the location, we all agreed a coastal traditional look was perfect,” says Thornton, who began by establishing a materials palette and architectural details suited to that ideal. “We added elements such as a barrel-vaulted ceiling in the entry for an informal statement and painted all the moldings and cabinets a crisp, high-gloss white.”

In contrast, all the interior doors sport a deep blue reminiscent of the ocean with the rich tone serving as a catalyst for the classic Americana color scheme that emerged throughout the house. “Blues, yellows, reds and natural driftwoods are our primary colors,” says Thornton. “But rather than being folksy, we used them in a relaxed spirited way.”

According to Thornton, choosing the right lighting fixtures was central to the overall look. “We opted for dark iron lanterns and lots of custom pendants to create a sense of cohesiveness,” she says.

Balancing luxury and comfort every step of the way, the designer introduced deep, plush seating in what she calls “agreeable fabrics.” “There’s nothing too precious, and I used lots of lightweight linens and cottons like you’d find at a beach house,” she says, noting grasscloth on select walls and sisals underfoot keep the breezy theme going. “Everything feels appropriate for a coastline house.” 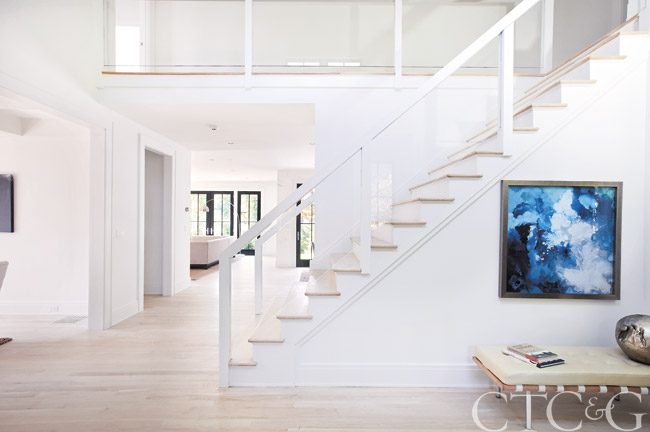 If there’s a trend emerging among young people making the migration from city to suburban life, it might be the desire to have their homes look like Connecticut on the outside while emulating the loft they’re leaving behind on the inside. Interior designer Calla McNamara for Able Construction helped create a spec home in Westport reminiscent of a sleek Manhattan apartment but with all the comforts of a sprawling New England home.

Starting with a traditional living room on the right, dining on the left floor plan, the house features light wood floors, dark framed windows and walls mostly devoid of moldings—the dining room’s sheetrock coffered ceiling being the exception. “It’s a contemporary take on that concept,” explains McNamara, who also introduced a fresh turn on the classic central staircase. “Instead of railings, we used glass so you could look right through it to the family room and to the outdoors.”

Lots of attention was paid to the kitchen where floor-to-ceiling Calacatta tiles provide the backdrop for seamless white lacquer cabinetry and quartz countertops. In the family room, a wet bar sporting an edgy black and white color scheme is cleverly concealed behind a sliding barn door. According to the designer, the space could have been a closet but a bar made more sense. “Because this is where entertaining happens in modern life,” she says. 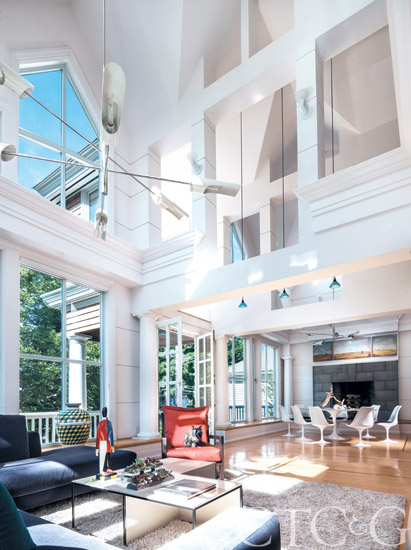 Located in Stoney Creek with enviable views of the Thimble Islands, the one-time nondescript, three-story home Sandra Vlock and her late husband, Glen Arbonies, purchased in 1989 has been in a constant state of evolution. As two architects just starting out, they renovated the structure into a live/work environment with offices on the first floor, and, when their two children came along, it morphed into a family home. Now 25 years later with her children grown and on her own, Vlock has renovated the house yet again, this time to showcase her individual talents as an architect and designer.

“I challenged myself to reinvest my energy in a positive way, re-imagining what our home could be like with my daughter, Mira, in high school and son, Adam, now away at college,” says Vlock, who reworked the first floor into bedrooms for her children and a gallery to display her artwork.

On the second level, she relied on new lighting and more contemporary furnishings to transform the open living space with its 24-foot vaulted cathedral ceilings. “The rooms were once filled with toys and blocks,” says Vlock, who took over the entire upper level to craft an environment in sync with her current lifestyle. Italian seating in the living room, a marble-topped Saarinen table and pedestal “Tulip” chairs in the dining room, and a pair of David Weeks chandeliers combine to reinforce the modern makeover.

A version of this article appeared in the July/August 2015 issue of Connecticut Cottages & Gardens with the headline: Interior Design.

This article appears in the August 2015 issue of CTC&G (Connecticut Cottages & Gardens).