The Art of Prints and Patterns

Exuberant hues and playful wallcoverings infuse this home with a youthful vitality. 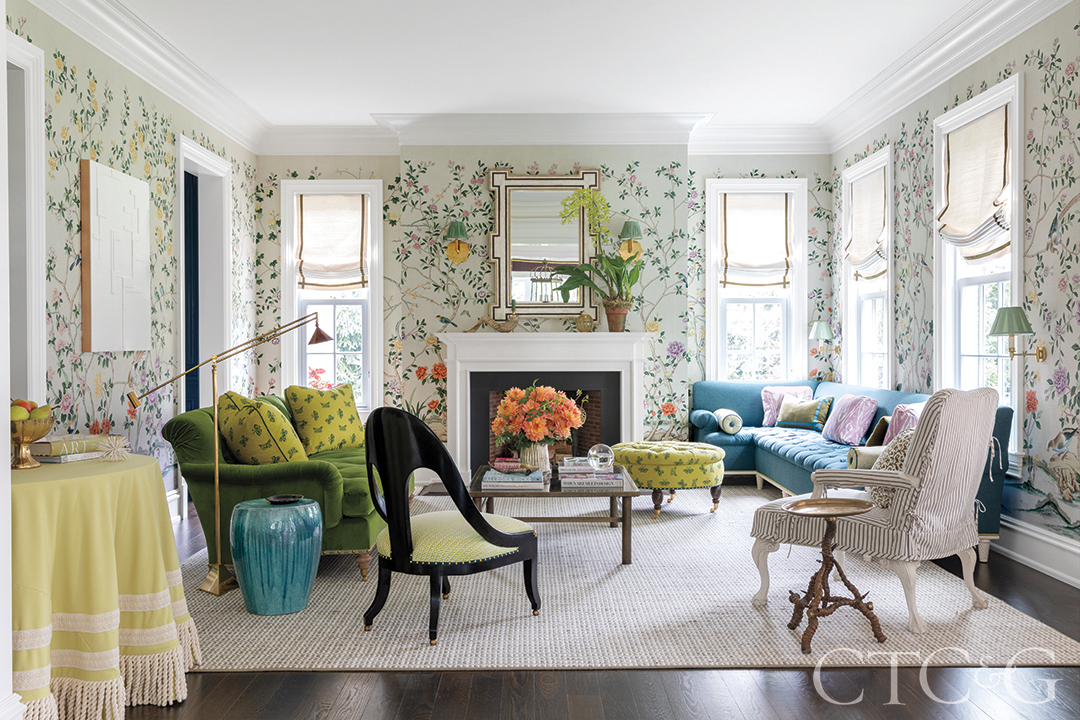 You might think a tufted ottoman covered in a citrine block print, a classic fauteuil chair peeking out from under a striped slipcover, and a floral montage wallcovering might seem like an unlikely combo. But in the hands of interior designer Ashley Whittaker, the disparate items she assembled in a Darien living room have a relaxed conversation that beckon all who enter to join in. In a way, Whittaker seems to have taken a page of out the playbook of renowned designer, Sister Parish, who unabashedly fills rooms with contrasting prints and employs an unapologetic use of color. Kit Kemp is another wonderful designer who seamlessly fills a room with eccentricity and fun. Whittaker, was totally in her comfort zone bringing a similar exuberance to this country home of a young couple with four children.

“A bunch of like cotton prints are just not that interesting, and as long as there is a thread that carries the eye from room to room you can use lots of colors,” notes Whittaker, whose approach infused the traditional architecture with a youthful vitality befitting its occupants.”

With the home’s Greek Revival countenance outside, expansive hallways and generous cased openings on the interiors, Whittaker sought to embrace and offset the obvious. Working with architect Alex Kaali-Nagy, the duo finessed traditional details like the fireplace surrounds, paneling and wainscoting, before the designer brought on the wallcoverings. “I knew the spaces needed to connect, and the colors of the handpainted de Gournay paper in the living room were an incredible launching-off point,” the designer notes. “It set a tone that was elegant but playful.”

It also supported her philosophy that “having every wall considered is the key to a successful home.” With that in mind, Whittaker left no wall untouched. Continuing in the dining room, the modern-leaning sleek aubergine lacquer backdrop intentionally contrasts with the living room florals, while the blue leather dining room chairs provide the connective tissue to a red and blue print wallcovering in the hallway beyond.

When the homeowner’s wishes for a trellised kitchen couldn’t be realized, it was fretwork wallpaper on the breakfast room walls and ceiling to the rescue. “It has the feeling of a garden room without being flowery,” says Whittaker, who used a floral print on the back of the chairs before punctuating the space with a red light fixture. In the library, Prussian-blue lacquered built-ins and walls offer a bright background for the assortment of prints and textiles. Once again an animal print rug, floral drapes and a printed velvet on the desk chair and ottoman create an unlikely mix, but as Whittaker says, “It’s the combination of prints with the textures of the leather on the desk, and cashmere pillows on the wool chairs that keeps things interesting and makes it all work.” 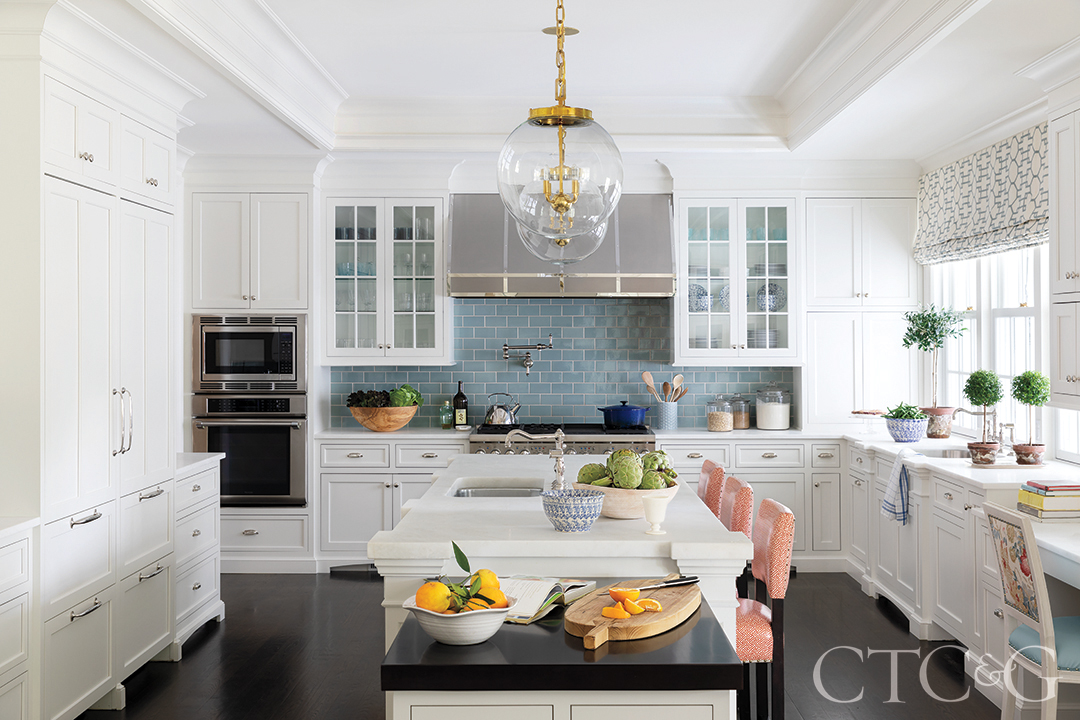 The relatively large proportions of the master bedroom made it another candidate for the paper treatment. “The pattern brings down the scale of the room, and having it surround you like you are in a garden makes things cozy as well,” explains Whittaker, who topped the bed with green scalloped edge custom linens. Green gourd bedside lamps provide the most sincere  complements. Even spaces like the attic play area and guest room are swathed in wallpaper and, as a consequence, personality. About the former she shares, “The soft blues and greens of the mandala print envelop you while becoming part of the architecture.” 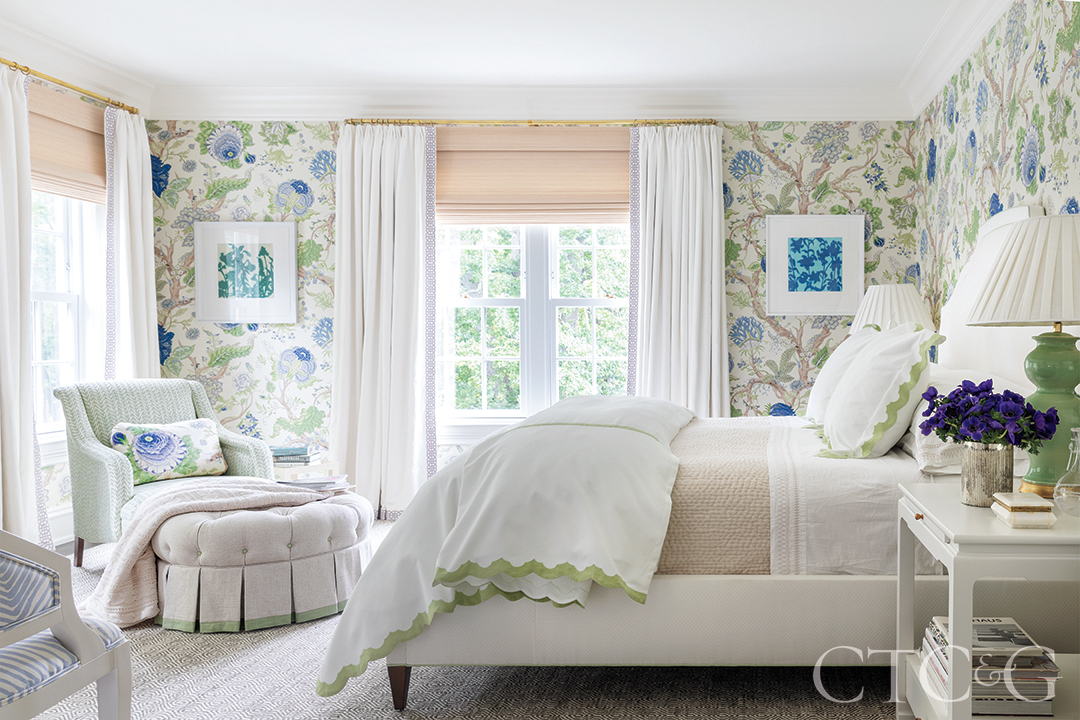 But all roads, or in this case hallways, lead back to the living room. There you will find the established color threads to keep things from feeling disjointed. “There’s dark purple in the dining room, Prussian blue in the library, and red lacquer moldings in the butler’s pantry,” Whittaker says. “Although it seems like nothing matches, you see each of those colors in the living room, so there is nothing jarring about the transition from space to space.”

The print version of this article appeared with the headline: Color Threads.

This article appears in the October 2020 issue of CTC&G (Connecticut Cottages & Gardens).