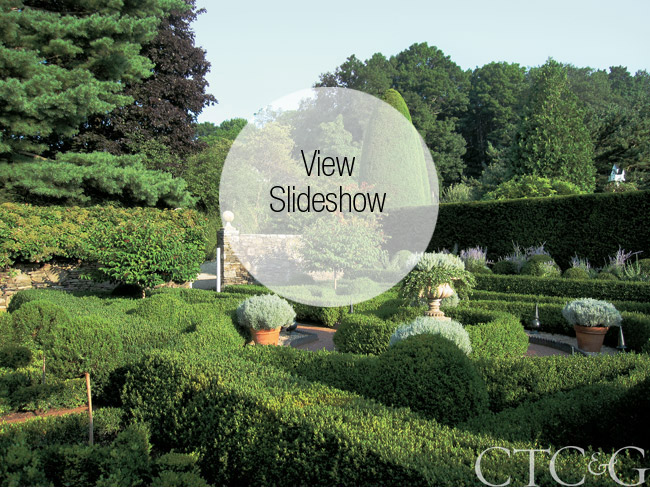 The spare geometry of Oscar and Annette de la Renta’s mostly green garden is all about structure and architecture. She loves the discipline and drama of a precisely cut line. He focuses his attention more on the plantings and decorative elements. Their collaboration has resulted in a garden in which high yew hedges enclose a succession of simple garden rooms, three giant wedding-cake yew topiaries add drama to the vista of a magnificent double allée of pear trees, and the natural beauty of native birches, oaks and sugar maples contrasts with the rigorous geometry of clipped boxwood and conical yews.

Many years ago, when de la Renta invited Russell Page, the great British landscape artist, to visit his newly purchased Connecticut farm and give him some advice, he was told in no uncertain terms that panoramic views and gardens do not mix. Standing on the terrace that stretched the width of the rear of the house, Page agreed that the view of open hillside and distant woods was indeed extraordinary, but then pronounced that this was no place to have a garden, since a garden is a room and rooms need walls, not views.

Page advised framing and enhancing the view but making a garden on lower, more protected ground to the far left of the house, where there was a barn. Although not the advice he had expected, de la Renta took it seriously. Today there is no garden at the rear of the house, only a long flagstone terrace (both the house and the terrace have been considerably extended) where large pots of agapanthus and boxwood are all that separate the house from its glorious view.

The main garden tucked away from the house and reached by a short walk, has no connection to the house or to the open view. It is entered through a simple gate and it encompasses a series of intimate garden rooms divided by high walls of clipped yew. The first of the rooms is a square formal garden laid out with boxwood-edged beds intersected by brick paths. It contains pots of herbs, four standard viburnums, a mass planting of perovskia under one of the long yew walls, and a neoclassical stone urn surrounded by a circle of boxwood in the center. An archway leads to a smaller formal garden that is mostly green, except for the climbing roses that grow up four wooden Chatsworth blue tuteurs. Another room enclosing the swimming pool is planted with mounded boxwood interspersed with hydrangeas and junipers. Further on is an exquisitely simple enclosure with a fishpond in the middle and two rows of pleached lindens underplanted with boxwood on either side.

Beyond these enclosed gardens is a majestic double allée of Pyrus calleryana 'Redspire.' It is the garden's most dramatic feature. On the far side, a magnificent mixed shrub and perennial border more than 350 feet long stretches the full length of the allée, and the three gigantic wedding-cake yew topiaries rise up nearby.

De la Renta insists his wife is the better gardener and has the more experienced eye. He credits her with reining in his inclination toward exuberant color and readily admits that they disagree often on garden matters. Currently in contention are four large honey-colored stone urns set on square pedestals that he purchased two years ago and placed in a line in front of a long yew hedge. She wants them to be moved, her rationale being that they look too much like Newport, which, she says, "Of course I love, but this is Connecticut." One has the feeling she will prevail. "I choose my battles" is her husband's diplomatic response.

Thinking to the future, he would like to level off part of the hillside at the rear of the house to better experience the depth of the view and to use the space to introduce a large "piece of water," such as a rectangular pond. He admits with a smile that serious negotiations with his wife have not yet begun. All he is willing to say at this juncture is "Annette hasn't as yet said no."

A Design-Savvy Couple Reimagines Their 1940s Dutch Colonial in Norwalk