The Face Behind Utopia Bath

Meet Merilyn Konnerth and learn how she makes her natural cleansing products. 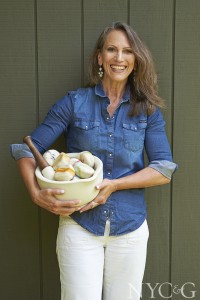 Bellport-based Merilyn Konnerth is on a mission to make “the daily ritual of cleans- ing,” as she describes it, a luxurious experience. “I want to elevate the simple acts of washing, moisturizing, and exfoliating so that they feel like gifts and opportunities for self-care,” says Konnerth, who, under the label Utopia Bath, crafts a variety of small-batch bath and body products, including honey-almond hand cream made with sheep’s lanolin, liquid soap with goat’s milk, and a sugar scrub with macadamia and sun- flower oils. She has been concocting the all-natural formulas for the line— which has grown from simple bars of soap to 30 products and counting—at her home laboratory since launching her company in 2010. Today, they are available on Etsy, as well as at brick and mortar stores throughout New York and New Jersey.

Konnerth learned to make soap “the old-fashioned way,” by combining lye and natural oils, from a soap maker in Massachusetts. The process came easily to the Long Island native, who grew up watching her father, a pharmacist, in action (her grandfather and great-grandfather were also pharmacists). “Thinking about how products are made and researching ingredients feels very natural to me,” she says. 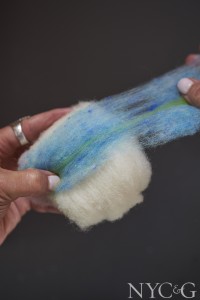 Among Konnerth’s most popular offerings is a wool-wrapped bar of soap called a Wet-N-Wooly. Inspired by weavers who pair their wool scraps with store-bought soap (the fiber is antibacterial, acts as a mild exfoliant, and can be used in lieu of a washcloth after the soap dissolves), she saw an opportunity.

Konnerth begins each batch of soap by stirring plant-based oils (such as olive and coconut) with a fragrance blend (lemongrass, eucalyptus, grapefruit) and liquefied lye in a pot until the mix reaches a pancake batter– like consistency, then pours it into a loaf-shaped mold to let it harden for a full day. The soap is removed, left to solidify for 24 to 48 hours more, and sliced into 16 bars, which then harden fully for another three weeks.

Next, she wraps white roving and a small clump of brightly colored wool around each bar of soap, dunks it in hot water, and rubs her hands around the wool to agitate the fibers, shrinking and adhering them to the bar. “I love feeling the wool in my hands and the wafting scents,” says Konnerth. “It’s a time-consuming process, but I find it cathartic, almost meditative.”