The American Friends of Versailles will be hosting their sixth Grand Gala Extraordinaire. This year's funds will help to preserve the frescos and architectural details of the Queen's Guard Room. 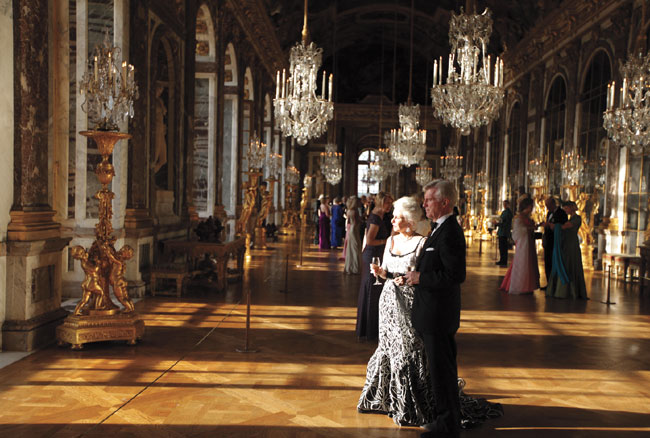 Imagine couples in formal dress sipping Champagne
in the Galerie des Glaces, their tuxedos and ball gowns reflected in the mirrors that witnessed the signing of the treaty ending World War I and numerous fetes hosted by various kings of France. That will be the scene on a Saturday night this June when the American Friends of Versailles hold the sixth Grand Gala Extraordinaire. From the Hall of Mirrors, contributors will stroll through the Queen’s Apartments, pause on the Grand Terrace to overlook the gardens at twilight and then gather for a state dinner in the Grand Trianon. Fireworks will conclude  the affair.

The state dinner at Versailles is the centerpiece of nearly a week of activities devised to raise funds to restore a room in the palace. The next day, all guests will cruise the Seine at a dinner dance in honor of Bourbon dynasty descendant Princesse Béatrice de Bourbon des Deux Siciles. On Monday, guests return to Versailles for an elegant picnic in Marie Antoinette’s gardens surrounding the Petit Trianon, before the farewell dinner buffet among amusing carnival exhibits at the private Musée des Arts Forains back in Paris.

Guests at the highest subscription levels are invited to other private events, such as high tea at Vaux-le-Vicomte hosted by Comte and Comtesse de Vogüé and a private luncheon with the Marquis and Marquise de Ganay at their historic Louis XIII Château de Courances.

This year, funds raised by patrons contributing $6,000–$50,000 are designated to restore the frescos and architectural details of the Queen’s Guard Room, the last chamber in the string of Marie Antoinette’s private apartments. Leading out to the Queen’s Staircase, this room is the grand finale for 3.5 million annual visitors to this intimate section of the palace.

In past years, funds raised by the group have excavated and  re-created Louis XIV’s fabulous water-themed mini garden, the Bosquet des Trois Fontaines, designed by André Le Nôtre and refurbished the charming Pavillon Frais where Marie Antoinette and ladies of the court dined on warm spring days. Plaques at those sites list the names of the attendees whose contributions create their own indelible memories while participating in preservation of the palace’s history. For more information, go to americanfriendsofversailles.org. 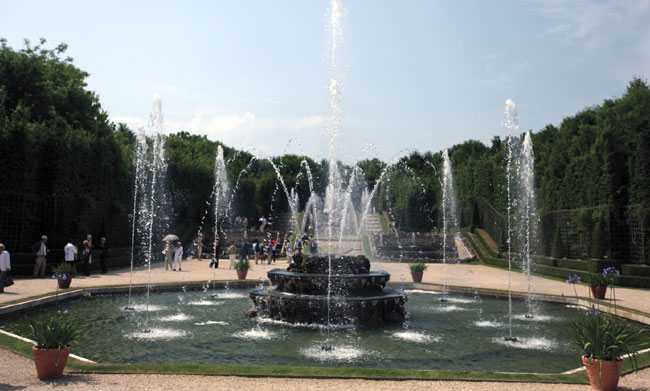 As one of the International Council Chairmen, I volunteer and attend many of the events.
1. Prince Amyn Aga Khan showing me his drawing of a woman by Greuze that I had admired in an exhibit at New York’s Frick Collection.
2. Gasping the first time we turned on the cascades in the historic Bosquet des Trois Fontaines, which, before our restoration, had been buried and forgotten for more than 200 years.
3. Dancing alongside astronaut Buzz Aldrin to Jimmy Buffett’s Margaritaville band at a ball in the Versailles Orangerie. 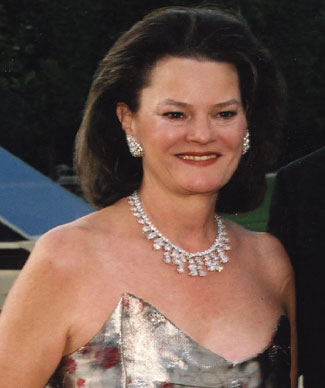 Catharine Hamilton, founder of the American Friends of Versailles, has spearheaded support of the restoration projects.

What backstage scene at Versailles has intrigued you? Before the Petit Trianon was restored, we were allowed to tour. It seemed as if it were just as Marie Antoinette had left it—no lighting, rolls of fabric thrown on the benches, numbers on the doors for all the queen’s lady friends.

This year’s events include tours of private gardens.What can Americans learn about gardening from the French? A French garden reveals itself: When guests arrive, they shouldn’t see any color. It’s sober and subtle, and then gradually unfolds.

What are some of your favorite Versailles memories? Working with the wonderful French committee, dinner at Guy de Rothschild’s Hôtel Lambert with a footman stationed behind each guest, sitting perched on little backless stools for the private concert in Marie Antoinette’s Opéra Royale, Anne-Marie de Ganay’s Indian theme party at Courances, the opera singer entertaining at Juan Pablo Molyneux’s Hôtel Particulier, receptions with Presidents Mitterrand and Sarkozy, looking down on the Place de la Concorde from the reviewing stand balcony of the Admiral’s Hôtel de la Marine.

Is the gala a family affair? We want families to attend. Many of our board members are couples—the two have one vote. By providing less-expensive tickets for children and grandchildren, we have assembled a great group of juniors who stay in touch year to year.

Why support Versailles? It has influenced every major palace in the world. Everyone thinks it’s so lavish, yet it’s so fragile. It’s not air conditioned, and many of the rooms don’t have electricity. Plus, France gave us the Statue of Liberty and has historically shared our values. In 1923, John D. Rockefeller Jr. initiated America’s assistance in the preservation of Versailles.