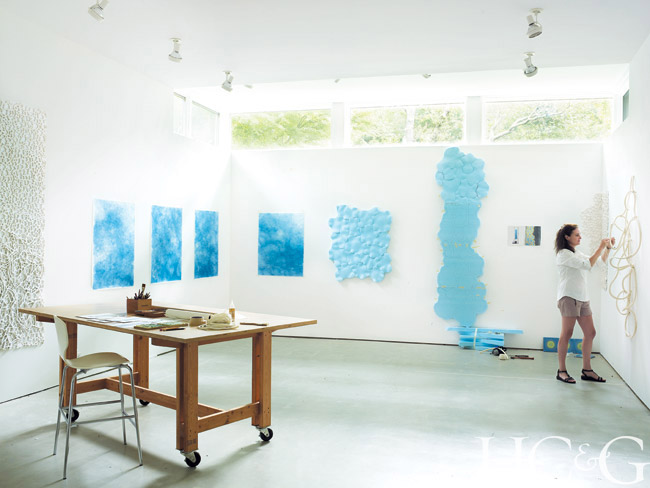 The Hamptons getaway of artist Karin Waisman and her husband, architect Carlos Brillembourg, serves a dual purpose: Not only does it offer a serene respite from hectic city workweeks, but it’s also an outlet for their respective creative pursuits. It didn’t pop up overnight, however. The story of the house and the couple’s partnership starts with a diminutive 1920s cottage that stood in the center of a quarter-acre property on a quiet lane south of the highway. Brillembourg bought the house in 1998, not long before meeting and marrying Waisman, and the couple spent several summers in the two-room getaway—now fondly referred to as “the shack”—cooking on a small brick patio in the shade of a century-old Japanese maple and enjoying sunsets in a west-facing garden.

“It was very cute, but it was also a disaster,” Waisman says with a laugh. “There was no dishwasher, no air-conditioning, no washer, no dryer, and no pool!” Additionally, the absence of drywall or insulation meant the shack was a summer-only affair. After the birth of their daughter, though, the couple knew it was time to build a grown-up house, complete with air-conditioning, as well as heat for the colder months. 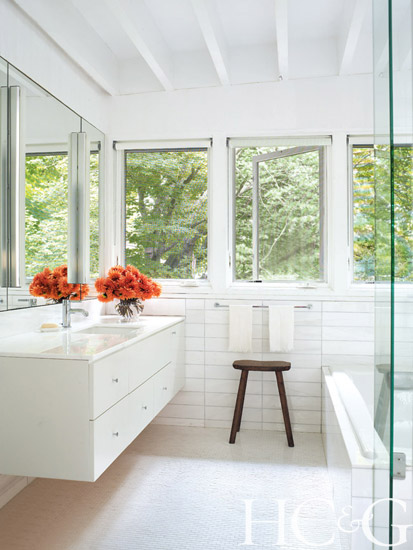 Brillembourg, a Venezuelan-born architect who is an adjunct professor at Columbia, put his skill set to use in planning the house; Waisman, a fine artist who studied architecture as an undergraduate in her native Buenos Aires and later earned an MFA in sculpture from Cornell, took on the role of “editor,” helping her husband shape and hone the design. The collaboration paid off. “We worked on it slowly, over many years, in a true partnership between husband and wife,” says Brillembourg, who recalls “originally placing a big window in the living room, but Karin said, ‘No, we need more wall space,’ and she was right! It would have been a mistake—and let in far too much sunlight."

“Carlos likes symmetry, while I like things that are balanced but a bit more subtle,” Waisman adds. “I’m very good with floor plans, but not so good with sections.” The pair faced typical challenges, like squeezing an ambitious wish list of functions into a house with strict height limitations on a narrow 60-foot-wide lot. The result: a home that’s less shack and more tree house. Angling the roof and partially submerging a lower level allowed the couple to get two full stories under the height limitation, while maximizing the views of verdant trees from almost every window. 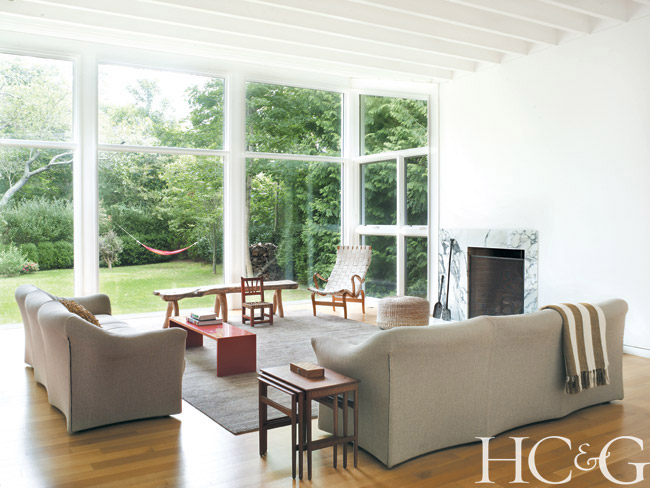 Brillembourg has worked in tight spaces before: During nearly four decades as an architect, he has restored the ruins of an 18th-century Venezuelan coffee plantation, connected and refurbished a pair of barns in Sagaponack, and designed the 230-room, five-star Hotel Casa Real in Valencia, Venezuela. Waisman is equally accomplished as an artist, with many shows and installations to her credit, one of which is soon to go up in Mexico’s Chihuahuan Desert. (Despite being trained as an architect, she prefers to work on her art full time.) Her studio, along with the family room, occupies what is technically the basement. Thanks to big windows that hug the ground on three sides, the lofty white space is so bright that by day, she perfects her meticulous wall sculptures and vellum drawings without turning on the lights. “It’s my favorite place to work—the light is so beautiful,” she says. “I can take a break, go do stuff in the garden, and come back refreshed.” In summer, the subterranean studio stays so cool, she often turns on the radiant-floor heating. 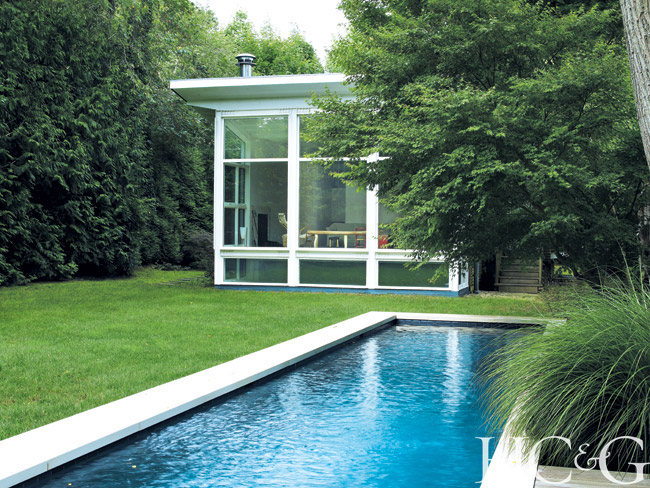 Immediately above the studio lies a soaring living room overlooking a secluded backyard and a 50-foot-long pool, lined in white limestone that rises above the grass at one end, creating a huge bench for guests to sit on during parties. (Brillembourg likes to make paella in a traditional steel pan over an open flame, while Waisman, true to her Argentinean roots, works the grill.) From the living room, staircases lead down to the kitchen—located at the very center of the house—and the family room, and up to Brillembourg’s study and the master bedroom. A tiny roof deck, inspired by the altane, or garden aeries, of Venice, is a favorite spot for stargazing.

The house is decorated minimally, featuring items culled from the family’s travels, like the quartet of colorful South American hammocks hung along one wall in the kitchen’s dining area, which seem almost like abstract sculptures. One of Waisman’s favorite pieces is an antique Spanish lebrillo, a traditional glazed washbasin used for bathing infants. A birthday gift from her husband during a trip to Andalucía, it now hangs next to one of Waisman’s own works in the living room. A rustic wood bench from Argentina, once used by gauchos for sitting around the campfire, and a straight-back toddler’s chair are cherished pieces as well, creating a contrast between old and new in a house with perfect equilibrium. “Each space has a different quality to it,” Waisman says of the home’s exquisitely proportioned rooms and carefully curated collections. “Each one is unique.”

A version of this article appeared in the July 1, 2014 issue of Hamptons Cottages & Gardens with the headline: Art & Architecture.