The Haughton’s 22nd International Fine Art and Antique Dealers Show, at the 67th Street Armory, October 22-28, exhibited a wide range of objects that spanned many cultures, materials and periods from antiquities to contemporary art.

Particularly captivating is the work of Hiromichi Iwashita, represented by Japonesque Gallery of San Francisco.

Iwashita’s textured panels of wood form a six-part screen. As Koichi Hara, owner of Japonesque explained, Iwashita stands over each panel of wood, which is cut to match the width of his body, and in a meditative state controls his breath as he methodically chisels into the panel. The tens of thousands of chisel cuts resemble rippling water, floating clouds or shifting sand dunes. As I moved from one side of the graphite- covered screen to another, the minute changes in chisel marks cause the work to become “alive” with movement.

This work is not easily grasped at a glance: It’s dark, subtle and it’s hard to define. Much in the way that a Japanese rock garden creates motion from static objects and raked sand, Iwashita’s screen plays with changing light and angles. I find his work to be a bridge between ancient Japanese carving techniques combined with traditional composition and modern art. 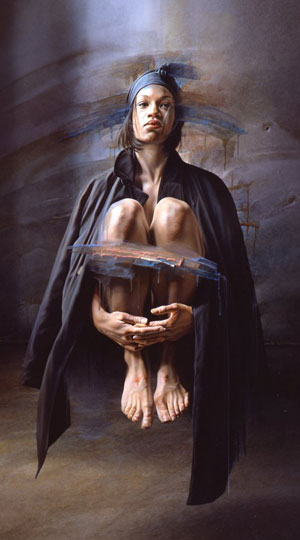 The Jane Kahan Gallery of Madison Avenue displayed the oil paintings of Hungarian born Istvan Sandorfi (1948-2007). Sandorfi’s early work is jarring and unsettling in both subject matter and technique (many were self portraits), however the work on display at the Armory was welcoming, and at the same time melancholy. His figures are so life-like they seem to breath yet parts of them fade completely into thin air. In these paintings nude, and semi-nude figures literally float in monochromatic rooms. Sandorfi suggests spontaneity with diluted splashes of wash that seem to drip toward the floor, but after close examination we realize the “splash” was painstakingly rendered, completing his illusion. The painter also challenges our eye to comprehend the simultaneous existence of the subject in and out of space.

The smoothness of the painting invites inspection and Sandorfi encouraged this. Unraveling the mystery behind the technique seems to be a crucial first step in understanding his work. I learned that there is no mystery at all and that the surface is a result of thousands of brush strokes each obliterating the texture left behind from the previous until a glass like surface remains. Sandorfi seemed to enjoy the critic’s analysis of his technique, his choice of subject matter and finally his motivation. Simply put he saw his work as an “opportunity for communication," in this regard he succeeds even after his death.

I chose these two artists, among the hundreds represented at the show because of the way they have challenged our eye using centuries-old techniques in a modern context. Iwashita, creating a monumental statement in humble wood panels, shares with us his meditative process, while Sandorfi, using only brush and oil paints suggests photographic techniques while defying time and space on his canvas.