The Inside Scoop on East End Real Estate: Dash, the Napeague Dunes and Barn & Vine 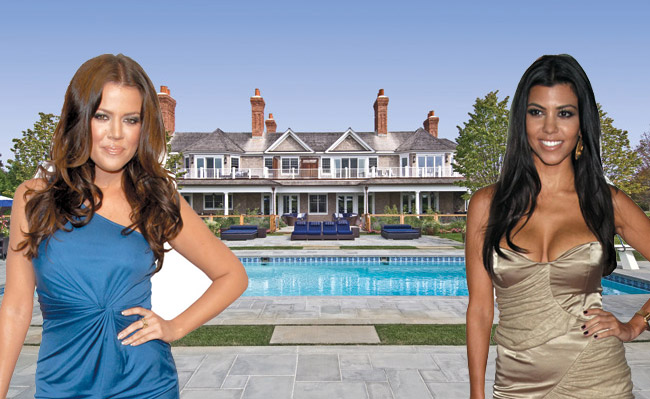 Can you airbrush a summer rental? Rarely have celebrities been so scrutinized as the Kardashians—and they’re coming to a Hampton near you. As the East End wearily readies for Kourtney and Khloé Take the Hamptons, a reality show filming on location for the E! network this summer, people are wondering just how—and where—the sisters will fit in. (It seems there’s no need to accommodate Kim and her famously ample booty, as a full-time tabloid career is apparently keeping her too busy—though she recently blogged: “My sisters will be opening up our first pop-up store in the Hamptons. I’m so proud of them! Can’t wait to go visit NY!”)

If Kimye does make an appearance with baby North, hopefully they’ll be okay with the fact that on the East End, South is always a lot more desirable. As for the Kardashians’ store, Dash, there have been rumors that it would pop up at the former Tiffany & Co. location on Main Street in East Hampton, or somewhere in Southampton—perhaps at 35 Main Street in the former Vineyard Vines space (which has moved to Jobs Lane) or on Hampton Road across from Sip N’ Soda.

After long hours in the store, there will be parties to attend and beaches to lie on, so Kourtney and Khloé will need a fabulous home in which to primp and play. Perhaps the Rose Hill estate in Water Mill, available for the season for a mere $895,000, can accommodate their needs. The expansive 2010 property includes 18,000 square feet of living space, a heated pool with a 20-seat spa, a disco, and a sunken regulation USTA tennis/basketball court (better not mention the latter to Khloé’s estranged husband, basketball player Lamar Odom).

Or maybe they’ll consider following in the footsteps of Beyoncé and Jay-Z and rent Sandcastle (pictured above) for a cool $1 million per month (up from the $400,000 per month that the star couple paid two summers ago). Sandcastle boasts 31,000 square feet of living space on 11.5 acres, including a 2,800-square-foot master suite along with 11 more bedrooms and 12 bathrooms, plus amenities including a pool with an underwater stereo, a tennis court, a spa with Jacuzzi, steam, sauna, and massage area, an Air Lounge (a fancy playroom with virtual golf, skateboard half-pipe, and rock-climbing wall), a media room with five plasma TVs, squash and racquetball courts, a bowling alley, and a full bar and disco. Makes you wonder what the true definition of reality is nowadays.

Here’s a real estate bombshell for you: Scarlett Johansson has reportedly bought in the Napeague dunes, spending $2.2 million on a 3,500-square-foot beach house on a secluded 1.4-acre lot abutting a reserve. No word on whether she’s still on the hunt for urban digs in New York City, too. Meanwhile, Hollywood heavyweight David Geffen has splashed down on Georgica Pond, reportedly spending a little more than $50 million on Courtney Sale Ross’s 7,500-square-foot home on four acres. (It was first listed for $75 million in spring 2013.) Geffen’s DreamWorks partner Steven Spielberg also lives on the pond; perhaps they’ll be taking meetings via kayak soon. 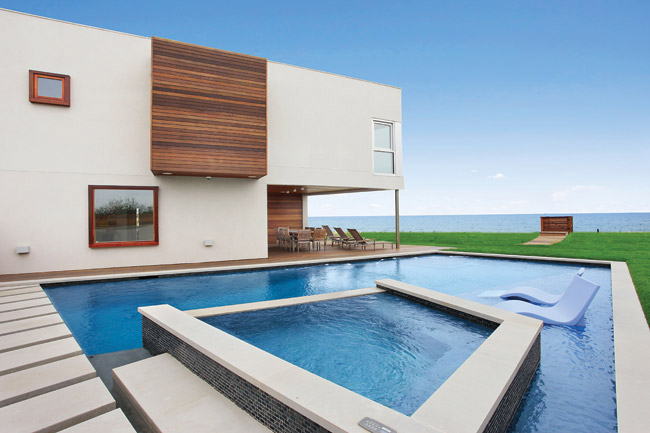 Faith in the market set off a big buying spree at the end of 2013, and that enthusiasm has ridden the wave into the new year. According to the research firm Long Island Real Estate Report, the Town of Southampton had a record-setting fourth quarter in 2013, with $904.5 million in sales. Further, according to Corcoran Group Real Estate, Southampton Village tallied $244 million from 45 sales during the first quarter of 2014, a 70 percent increase over the $143 million from 28 sales during the same period in 2013. Tim Davis, Corcoran’s East End record-leader for 2013 (he sold Vince and Louise Camuto’s Wooldon Manor for $75 million), reports that the market has been active at all levels, not just the high end. “Numerous transactions have gone into contract,” he says, “and our inventory is quickly being depleted. Vacant land is also hard to come by, so people are looking at properties to redevelop.”

Rylan Jacka of Sotheby’s International Realty concurs. “The market is really robust,” he says. “But as long as we get an influx of new inventory through the spring, we should see a strong summer season. Buyers who let a house get away from them last year won’t let it happen again this year, though. And homes in every price range have seen action—not just those at the high end.”

Still, there are prizes to be had for those with deep pockets. Davis currently represents a 2012 contemporary in Sagaponack (above) that’s listed for $19.85 million, with an unbelievably low tax assessment of $14,950. (According to Sagaponack Village Court Treasurer Rhodi Winchell, the rock-bottom tax rate, significantly lower than the rest of the Hamptons, is due in part to Sagaponack’s relatively small annual budget of $800,000, few public services, and a school district made up of only one building: the Little Red Schoolhouse.) “It’s a very cool modern house on the ocean with a pool,” Davis says, adding that the beach replenishment project between Water Mill and East Hampton has increased the depth of the sand by several hundred feet in some areas, making Sagaponack more desirable than ever.

But can deep pockets really fend off beach erosion and climate change? The Shoreline Erosion Assessment and Plan for Beach Restoration, authorized by the town board of Southampton two years ago, is improving the beaches and dunes along a 30-mile stretch between the Shinnecock Inlet and the Town of East Hampton. In February 2013, beachfront property owners approved a tax increase in order to pay for the 2 million cubic yards of sand expected to be added to the beach during the next decade or so. Who said the beach was always free to anyone who wanted to walk on it?

City living has its rewards—convenience, culture, people who can pick up and deliver things for you. Besides, a weekend house is all about constant upkeep, right? Not necessarily. Condos are taking root on the East End at a record pace, as Hamptons-lovers are finding it much easier to spend the weekends in a nice, tidy apartment instead of a full-blown house. No pesky weeds to pull and no pool boy to pay: There’s just the key to the front door, a trip to Provisions for, um, provisions, and the beach.

The Hamptons condo craze is at a fever pitch in Sag Harbor, with assorted projects, some nearly ten years in development, now ready for their debuts. At Cape Advisors’ Watchcase development in Sag Harbor, sales have been going strong since they started up a little less than a year ago, with the property’s 48 factory lofts virtually sold out, the one-bedroom bungalows all gone, and the penthouses and townhouses now coming on the market for the first time. (Whether you’re just looking or a serious buyer, be sure to stop by HC&G’s Holiday House Hamptons showhouse this summer, which will be held on location at Watchcase.)

Across town, the former 21 West Water Street condominium project, which was shut down in 2009 after being plagued by financing issues, has a new lease on life. In December 2013, the property transferred from East End Development to Water Street Development for $27 million and was renamed Harbor’s Edge, with 12 two- and three-bedroom condos and three penthouses ranging in price from just under $3 million to $6 million for 1,900 to 2,800 square feet. (A model of a three-bedroom unit will be open for viewing just after Memorial Day.) Original contractor RLW4 is back on board and making substantial changes to the initial plan, including recladding the building in red cedar and replacing metal panels and faux stone siding with wood planks and shingles. Each unit will have access to private terraces and/or balconies with water views, a shared rooftop sundeck, a 50-foot swimming pool, and a wet bar with kitchen, as well as an in-season concierge. “There are people who want everything the Hamptons has to offer, but without having to deal with the lawn or pool maintenance,” says Keith Green of sales agent Halstead Property Development Marketing. “They want to come out here on Friday evening and just have fun. And the fact that it is on the water in Sag Harbor is a huge bonus.”

Anyone who really knows the Hamptons understands that estate management can involve much more than preventing frozen pipes in the winter and pruning the privet in the summer. Can you call the Jimmy Choo rep—or just Jimmy Choo himself—to rush over a pair of size 8 strappy sandals during a wardrobe emergency, with only 20 minutes to go until tonight’s gala? What about parking at the beach when the car has no beach sticker? And, most important, can you get Bonnie on the phone? You know, Bonnie, the most powerful person in the Hamptons?

If the answer to any of these questions is no, then call Therese Lindstrom-Kamares, whose Hamptonite Club will cater to your every whim, and then some. The members-only luxury lifestyle management company offers services ranging from house sitting to in-home spa treatments to finding a homeopathic vet for Fido. “Clients have access to our trusted network of partners,” says Lindstrom-Kamares, whose five account managers are all well-connected locals. “There are no limits to our services, as long as it’s legal.”

And Bonnie? She’s the maître d’ at Nick & Toni’s, where a Saturday night reservation is still one of the most precious things no amount of money can buy.

Like its vineyards, the area north of Bridgehampton Village has matured over the years. Now it’s bearing real estate fruit, with its most recent spawn the aptly named Barn & Vine project. The 37-home development near Channing Daughters Winery is the brainchild of architects McDonough & Conroy, with interior design by Carlyle Designs. Four Douglas Elliman brokers—Fredrik Eklund (of Bravo’s Million Dollar Listing New York) and John Gomes, both based in New York City, and Terry Thompson and Aaron Curti, both based in the Hamptons—are representing Barn & Vine, and Eklund has put his money where his mouth is, purchasing one of the first homes on the market for himself.

“The idea behind the project is that buyers can pick their lot, their home, and their design and get exactly what they want,” Thompson says. “That may sound expensive, but it ends up being well below what some custom houses can cost.” Prices range from $2.75 to $4.5 million, with properties featuring en suite bedrooms, gunite pools, and lush views of the vineyard, plus a concierge move-in package for each new buyer.

Browse More Features from the June 2014 Issue of HC&G