The inside scoop on New York real estate

A celebrity packed Snedens Landing in Rockland County has many talking since the now single Tom Cruise toured a 13,500-square-foot house that wasn't even on the market. Discover what other celebs are making seals and deals on the market this fall... 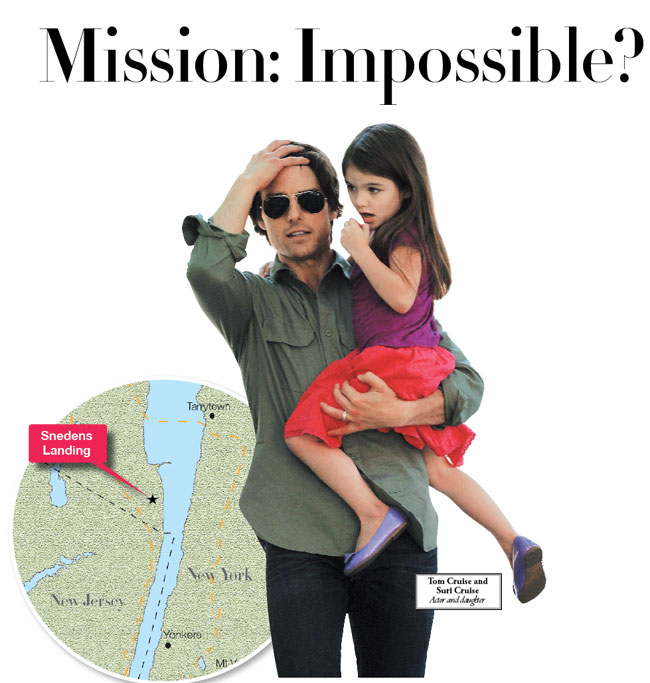 
This just in from the most celeb-packed neighborhood you’ve never heard of: tiny Snedens Landing, part of the Rockland County hamlet of Palisades, comprising a little more than two square miles and just 100 or so homes along the Hudson River. “The Landing” made the tabloids this summer when the suddenly single Tom Cruise toured a 13,500-square-foot house that wasn’t even on the market, Suri in tow (perhaps he was willing to make an offer the homeowners couldn’t refuse?). Most of the time, though, the steep and twisty streets are quiet, despite high-profile homeowners such as Al Pacino, Bill Murray, Aidan Quinn, Mikhail Baryshnikov, and Phish frontman Trey Anastasio. Rustic and quirky, Snedens Landing is the kind of place where unmarked roads end without warning and the water views are so jaw-droppingly dramatic that you might feel compelled to trade everything in and become a latter-day Hudson River School painter. 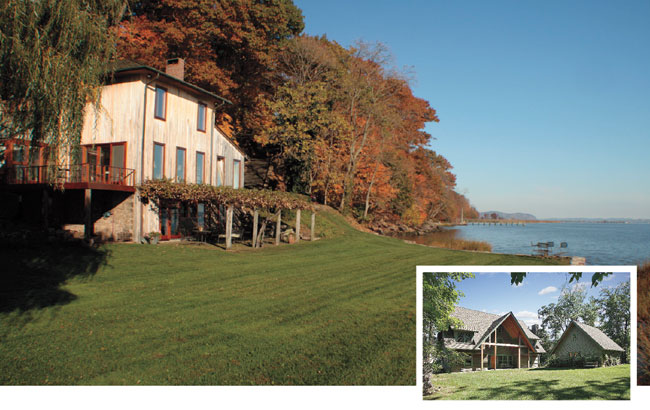 Half the fun of touring Landing houses is tracing their lineage. There’s the home that actress Didi Conn (she played Frenchy in Grease) bought from Murray, who left behind a fireman’s pole from the Ghostbusters movie set (he now lives elsewhere in the Landing). There’s also the 1,800-square-foot, mid-20th-century Cliff House that’s been owned, in successive order, by Ellen Burstyn, Lorraine Bracco and Harvey Keitel, and Anastasio, who bought it for around $2 million in 2009 and is rumored to be putting it on the market any day now. And there’s the Ding Dong House, so called because, as the one-time town library, it once sported a bell. Previously owned by another swirl of celebrities—Jerome Robbins, Margot Kidder, and Uma Thurman and Ethan Hawke—it’s a curious amalgam of a circa-1750 dwelling and a 19th-century Gothic-style addition on a pretty half-acre plot featuring a pool and spa, an outdoor kitchen, stone terraces, and glorious gardens, all with views of the Hudson. It’s listed for $3,250,000 with Richard Ellis of Sotheby’s International Realty. 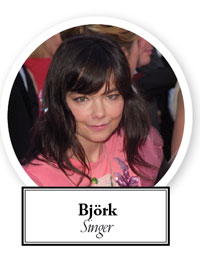 Ellis, the Landing’s go-to broker, says that history helps explain why the enclave, founded before the Revolutionary War by ferryman Robert Sneden, is so popular with artsy types. Around the turn of the 20th century, sculptors Mary Lawrence and François Tonetti purchased some 16 homes that they began to lease out to their artist friends at attractively low rents, creating what was called the Snedens Landing Artists’ Colony. Over the years “colonists” came to include Noël Coward, Ethel Barrymore, Orson Welles, and Laurence Olivier and Vivien Leigh. More recent residents have been an equally eclectic mix: author Toni Morrison, the Isley Brothers, and Björk. 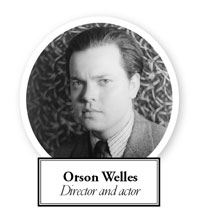 Currently on the market for just under $6 million is the Pirate’s Lair, which began life as a circa-1850 fisherman’s cottage and still offers private river frontage as well as a rebuilt 3,400-square-foot home featuring five bedrooms and three baths. Among the few contemporary homes in the Landing is a stunning 1.3-acre confection designed as a modern farmhouse, with 6,000-square-foot interiors offering six bedrooms and five bathrooms and an asking price of $3,595,000. Both of these properties are listed with Ellis.     —Diane di Costanzo

over the river & through the woods

Across the Hudson in Westchester County, Katonah is abuzz with the listing of Treetops, a home owned by Matthew Bronfman, son of Seagram honcho Edgar Bronfman Jr., who has been renting out the 12-acre compound for $28,500 per month. Listed for $9.5 million with Patty Carpenter of Renwick Sotheby’s Realty, Treetops is built in the style of an English Country manor with an ample back-to-front reception hall so popular among today’s home builders. The 8,700-square-foot interiors offer eight bedrooms, six fireplaces, six bathrooms, and two half bathrooms, while the grounds include a pool, tennis court, caretaker’s cottage, two-bedroom guesthouse, and elaborate tree house.

Farther upstate, in Columbia County, everyone’s talking about the Taghkanic House, architect Thomas Phifer’s first residential commission after his departure from Richard Meier & Partners. Phifer built it in 2001 for makeup artist Moyra Mulholland, who has worked with such stunners as Kate Moss and Nicole Kidman. Located in the town of Taconic, the 8,800-square-foot home includes six bedrooms and six bathrooms and is topped by a glass pavilion that looks as if it’s floating above its base. In addition to sweeping views of the Catskill Mountains, the 350-acre grounds designed by late landscape architect Dan Kiley feature a serene reflecting pool and an outdoor swimming pool (there’s an indoor one too), as well as a tennis court, bocce court, and three barns. Heather Croner of Heather Croner Real Estate, affiliated with Sotheby’s International Realty, has the $8,250,000 listing. 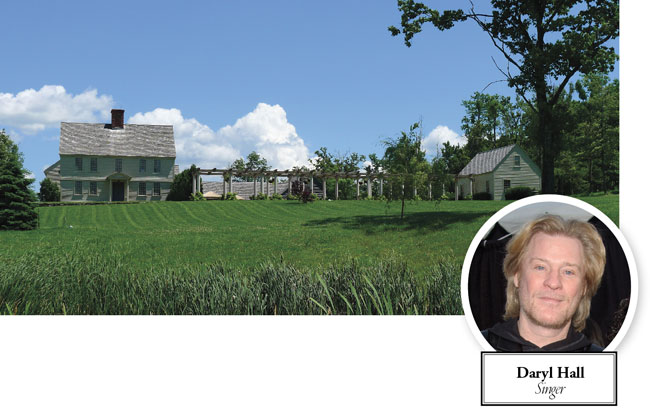 In Amenia, in Dutchess County, the Revolutionary War–era Georgian Colonial renovated by singer Daryl Hall is listed with Croner for $8,750,000. As a serial restorer and all-around old-house buff, Hall has previously owned the oldest private home in Maine and a Bahamas spread that’s now part of J. Crew honcho Mickey Drexler’s real estate portfolio. Hall combined two 18th-century structures to create Huckleberry Farm, comprising a nearly 7,000-square-foot main house with 24 rooms, an indoor swimming pool, a keeping room, and a tavern. A recording studio, several guesthouses, and a hunting lodge can also be found on the 245-acre property.      —D. C.


round and round we go

The RoundHouse at Beacon Falls, a new hotel and restaurant designed by David Rockwell in the once blighted Dutchess County town of Beacon, has just opened for business. “The most unique thing about the RoundHouse is that it is the perfect blend of an industrial shell with high-end, handcrafted elements,” says its interior designer, Elizabeth Strianese, describing the soup-to-nuts conversion of the 200-year-old circular structure, which began life as a textile mill and later became home to the first lawnmower factory in the country. 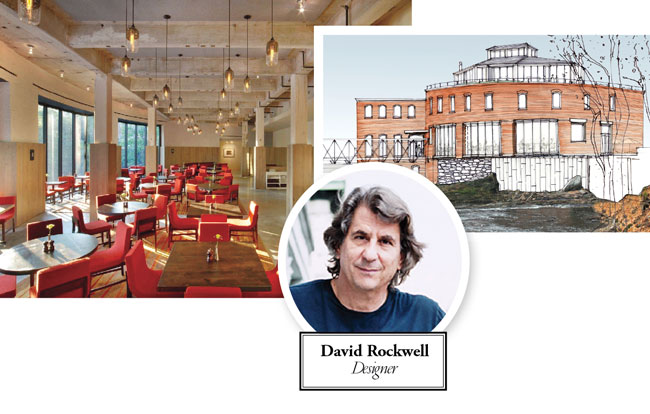 The RoundHouse is already a source of community pride in up-and-coming Beacon, which hipsters have taken to calling “Beacklyn.” Many of the finishes and details were contributed by local artisans, such as cerused oak in the restaurant, metal bar surfaces by Metconix and artist Kazumi Tanaka, and hand-blown glass light fixtures by Niche Modern and 10 Willow. Only a few accessories were bought “off the shelf,” and because of this “the project retains its old soul,” says Strianese. “It represents the very best you can get from raw space, creative young minds, inexpensive real estate, a city that encourages growth and renewal, and lots of local talent.”      —Mary Wheeler

By and large, brokers are bullish on Manhattan’s residential market: In particular, they’re betting that high-end condos will sell briskly and luxury rentals will continue to lease in a New York minute—although a lack of inventory and consumer uncertainty during election season threaten to dampen business.

“The fall market will continue to be strong both for condo sales and rentals, says Roberta Axelrod, director of residential sales and leasing for Time Equities. “The rental market has increased 5 to 10 percent year on year, and condo prices are up 5 percent over last year, an indication that the market is on its way back up to pre–financial crisis levels. But unlike the rental market, which is at an all-time high, condo prices are still below the peak of the sales market, in 2008. However, with still historically low interest rates and record-high rents, many tenants are concluding that now is the time to buy, before prices rise even higher. Also, with the crisis in Europe, many foreign investors are putting their money into New York real estate.”

Prudential Douglas Elliman president and CEO Dottie Herman concurs: “We expect to see a continuation of the sales trend we’ve been tracking in trophy properties, the vibrant high-end market that keeps breaking records,” she says. “With the end of the Bush tax cuts, we might experience owners trying to sell and close before the end of the year, but because of the upcoming election, buyers and sellers alike also might consider holding off with a sale or purchase and await the outcome.”      —Barbara Thau

Emeril Lagasse’s famous catchphrase “Kick it up a notch” falls short when it comes to real estate. The celebrity chef’s townhouse at 158 East 61st Street has just been reduced in price from $15 million to $13.5 million, even after the 6,900-square-foot property got the star treatment on HGTV’s Selling New York. The townhouse includes five bedrooms, six baths, four fireplaces, a library, a wine cellar, a garden, and a terrace and is listed with Serena Boardman at Sotheby’s International Realty. 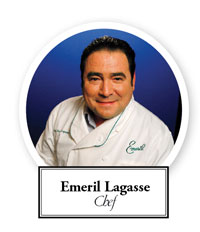 Meanwhile, the godfather of hip-hop, Russell Simmons, has done some major flip-flopping over his Financial District penthouse, which has been on and off the market for more than a decade. Sean “Diddy” Combs was originally set to close on the apartment, located at 114 Liberty Street, around the time of the 9/11 attacks, but backed out of the deal because of the amount of damage the home sustained. The 7,175-square-foot spread has since been fully renovated and listed over the years from $8 to $12 million, with a current ask of $11 million. Among the amenities: a grand circular staircase, master suite, two huge setback terraces, a den, and 40 windows. Deborah Grubman of Corcoran Group has the listing.      —M. W.

You, too, can live like a Rockefeller—for a mere $27.5 million. The late Vice President Nelson Rockefeller’s former apartment at 810 Fifth Avenue, where he and President Nixon hashed out the GOP’s Medicare plan in 1960—is on the market. Listed with Kirk Henckels and Jennifer Callahan of Stribling Private Brokerage, the two-bedroom, three-bath property boasts picture-postcard views of Central Park, a 47-foot-long living room with two fireplaces, an expansive formal dining room, a library, and a two-bedroom master suite with an oversize dressing room. Two additional bedrooms, previously removed to create large entertaining rooms, can be restored to create a four-bedroom pad.      —B. T.

A Frank Lloyd Wright house in Phoenix, modeled after Manhattan’s Solomon R. Guggenheim Museum, is in danger of being torn down by a Nevada developer. The home, which Wright orginally designed for his son David, is unique among the master architect’s residential works. Built in the early 1950s, it is based on the same circular spiral plan of the Guggenheim and predates the museum by at least six years. Several historians and critics consider the house to be among the 20 most significant surviving Wright structures. “This is not just a local preservation issue, but a matter of national and even international importance in terms of saving an extraordinary design from the late phase of Wright’s remarkable career,” says Janet Halstead, executive director of the Frank Lloyd Wright Building Conservancy in Chicago. “It needs a new owner who recognizes the significance of this house and will restore it and take it to the next chapter in its history.” Care to be that new owner? It can be yours for $2.7 million; petitions are currently in place to delay its demolition while the Arizona courts decide whether to grant it landmark status.      —M. W.