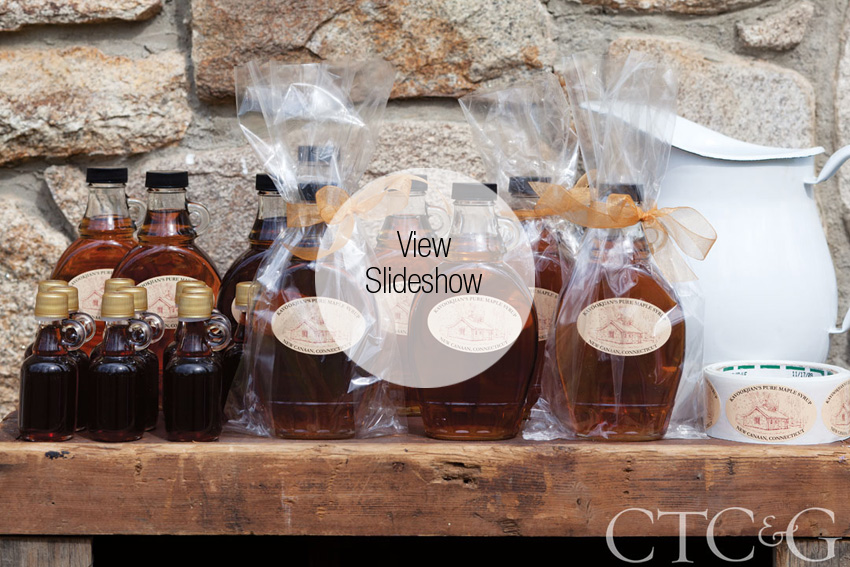 A maple syrup operation has been bringing the Kavookjian family of New Canaan together for more than a decade. Long obsessed and involved with the process of making syrup, Haik Kavookjian, who works in the medical profession, and his brother-in-law Rob Young, an architect living in Darien, combined their talents to create one of the only large-scale maple sugaring operations in Fairfield County.

On a chilly late winter day, steam drifts from the top opening of the attractive maple sugar house Young designed for his brother-in-law 12 years ago. Instead of erecting what is termed the “classic” maple sugar house made of wood siding and a tin roof, Young fashioned an attractive 400-square-foot structure that blends impeccably with the property, thus pleasing local zoning regulators, the Kavookjians and their neighbors. Stone for the maple sugar house was gathered from the Kavookjian’s four acres, and the front of the slate-roofed building faces the family’s home. It’s nestled into the grade of the property and fits nicely with existing stone walls.

The maple syrup operation further bonded an already tightly knit family. Haik and Lynn Kavookjian, a former nurse, have four children (Dylan, Gabriel, Ani and Haik), who have all participated in the process, whether tapping maple trees and then gathering sap, helping stoke the fires that heat the sap and condense it into maple syrup, or selling the sweet-tasting liquid at a local farmer’s market during the summer. Lynn Kavookjian also lends a hand and whips up sumptuous delicacies that use the syrup as an ingredient—from maple-walnut muffins to mouthwatering maple-pecan pie.

“We didn’t have video games when we started the operation,” says Lynn. “So maple sugaring was something they all did growing up, and they found it fun. They still do.” The children remain involved in various ways: Ani designed the label that adorns the family’s eight-ounce bottles of maple syrup, and Dylan wrote an essay on maple sugaring for a college class.

“It’s been a wonderful way for the family to do something meaningful together,” says Haik Kavookjian, as he puts more logs into the bottom of the condenser to keep the fire roaring and the sap evaporating. “The kids have had such a wonderful time helping out, and they’ve had much success selling the syrup at the farmer’s market.” (The syrup will be sold at the New Canaan Nature Center this year.) “As for Lynn, it’s in her bones,” laughs Haik. “She grew up on a produce farm in New York State.”

Each year, the family produces 20 gallons of syrup on average from 700–800 gallons of sap. Some 80 percent of the sap is gathered on the family’s property, the other 20 percent from the trees of helpful neighbors. Indeed, rather than detract from the rural neighborhood, the maple syrup operation has brought it together. “We are always having neighbors stop by to chat when they see the steam rising from the top of the sugar house,” says Haik Kavookjian.

A version of this article appeared in the April 2013 issue of CTC&G (Connecticut Cottages & Gardens) with the headline: Maple Sugar Shack.