The Late Walter Channing Left Behind a Thoughtful, Whimsical Wonderland That Continues to Live On 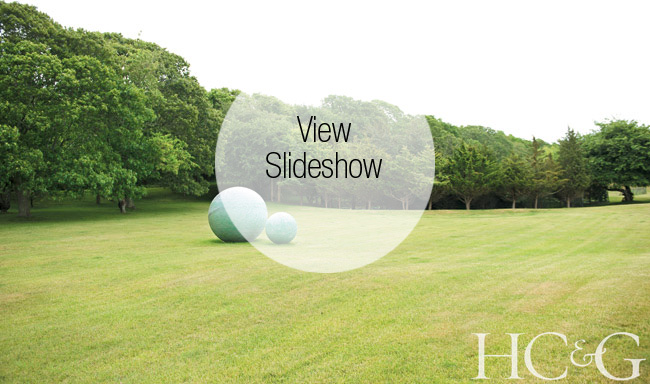 In the late 1970s, when Walter Channing first laid eyes on some property along Scuttle Hole Road in Bridgehampton, it reminded him of a large farm that had backed up to his family home in Dover, Massachusetts. As a little boy, he would explore the fields and climb the trees on his neighbor’s land, always thinking of it as a giant playground. The prospect of re-creating this childhood wonderland on the East End of Long Island was compelling, and he began to acquire acreage in a very deliberate way.

Most of the property had been potato fields, so his first task was to plant trees and “sculpt” the land. He used bulldozers to create undulating rises where there were only flat fields and then proceeded to replace the potato crops with grapevines. Walter’s maternal grandmother was French, and he had visited the countryside of the Dordogne often enough to develop a love of wine and an appreciation for that region’s landscape of twisting rows of luscious fruit. After learning that the soil composition in the Hamptons was ideally suited for growing grapes, he began buying rootstock and planting vines over the next few years. In partnership with Larry Perrine, an experienced winemaker and vineyard manager, Walter established Channing Daughters Winery, which has become a highly acclaimed wine purveyor. Under the current stewardship of winemaker Christopher Tracy, it has earned a reputation for bold, imaginative blends and exotic and trend-setting vintages.

Channing Daughters Winery also features the creative genius of its founder on its labels, in the tasting room, and in the sculpture garden adjacent to the vineyard. Walter’s artwork, which is exclusively carved in wood, ranges from totemic structures to whimsical figures and often features what he liked to call “metaphysical twang.” An example: the upside-down tree, with root ball still attached, that seems to hang in the air in a corner of the sculpture garden. Another: a massive cedar stump that depicts an encounter between a sphinx and an octopus.

Though he received no formal training in sculpting, Walter forged an early connection to wood- carving, thanks to some experience with a tree-trimming business in his teens and a stint as a forest firefighter when he was in his 20s. When he moved to New York to begin a career in venture capital, he happened to witness the demolition of the old wood piers on Wall Street and quickly interceded to save the beams from incineration. Wielding a chainsaw with the skill of an artisan, he transformed them into his first iconic “pencil” sculptures, which are now held in private collections across the country. Using mostly trees “scavenged” from hurricanes or lightning strikes or other natural disasters, Walter began to create dramatic works with increasingly complex detail. In addition to various chainsaws and lathes and table saws, he employed a vast array of hand tools. These allowed him to move from rough-hewn carvings to finely crafted pieces. In the living room of our house, a bench appears to be made of tufted leather but is actually solid wood. It never fails to trick the eye.

Whether tricking the eye or teasing the brain, Walter loved to engage his audience with mischief. In the middle of our lawn, there are two large green balls that he installed and lit from the inside. About 10 years ago, he figured out how to dismantle a wheelchair and rebuild it in the larger of the green balls. He then led a tour of the sculpture garden with a remote control in his pocket, with which he secretly directed the ball to follow the group. As people started noticing, they began to get excited and nervous and eventually broke into hilarious laughter. He was delighted with the reaction.

Walter died in March, after a long illness. Our daughters Francesca, Isabella, Sylvia, and Nina, along with a new granddaughter, Aila, and I are comforted by the presence of him through his work across our property. The “playground” he designed and produced is a magical place where people can drink wine, tour the sculpture garden, and walk through fields and woods that he and I have preserved with the Peconic Land Trust. It is a beautiful legacy from a visionary man.

A version of this article appeared in the August 1 2015 issue of Hamptons Cottages & Gardens with the headline: A Channing Daughters Memory.