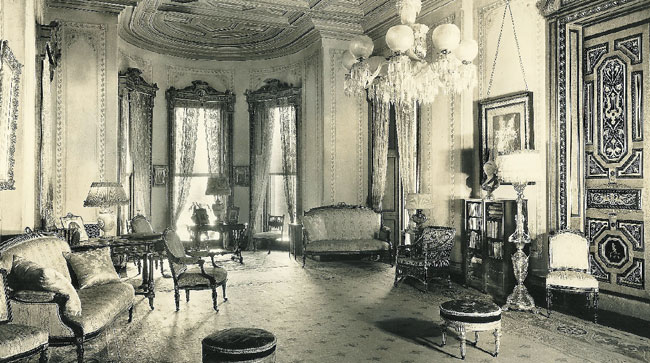 Captured in Time A view of the opulent music room at the Lockwood-Mathews Mansion Museum, circa 1920. For more information, go to lockwoodmathewsmansion.com. photograph courtesy of Brian J. Fischer II

Stepping into the rotunda of the Lockwood-Mathews Mansion Museum (LMMM) in Norwalk is like entering a time capsule of the Victorian era. Surrounded by the Gilded Age splendor of opulent décor and architecture, visitors will find themselves enchanted by the 145-year-old estate, which is the first recipient of Cottages & Gardens Publications’ Iconic Cottages & Gardens (IC&G) initiative. IC&G aims to highlight the needs and provide support for the purpose of preserving and revitalizing the state’s landmark structures and gardens. The incipient program was inspired by the 2011 People’s Project, which redecorated the Connecticut Governor’s historic residence.

LMMM was built between 1864 and 1868 by French-trained architect Detlef Lienau as a summer home for renowned railroad baron LeGrand Lockwood. Among the first to have state-of-the-art luxuries such as indoor plumbing and a burglar alarm system, the mansion was advanced for its time. “Lienau basically introduced the châteauesque style, prevalent during the Victorian era, to the American public,” Executive Director of LMMM Susan Gilgore says. “The Lockwoods employed the most outstanding craftsmen and artists of the day. Every room is truly a work of art.”

When the last owner, Florence Mathews, died in 1938, the city of Norwalk purchased the property. The mansion deteriorated and was in danger of being demolished until a group of concerned citizens and historians came to its rescue. It was declared a National Historic Landmark in 1971. Since then, it has served as a historic center for conservation, education and enrichment—not to mention as the backdrop for numerous Hollywood productions.

“[LMMM] is definitely an icon of architecture,” says Gilgore. “Scholars have written dissertations on it, architects and designers visit to see true Victorian design and décor, and students study its history.”

Proceeds from this year’s CTC&G’s Innovation in Design Awards drawing was donated to help fund the restoration of the music room, originally furnished by Herter Brothers of New York. Restoration plans include reproduction of the room’s valances, trimmings and carpeting. “In our industry, we have designers, architects, retailers and people who would be the best to help with the mansion,” says Cottages & Gardens Publications CEO Marianne Howatson. “We’re hoping that this will bring it to their attention, and they will volunteer to help out.”