The Magic of Mexico: Discovering the Hidden Charms of Puerto Vallarta and the Costa Alegre

See the discoveries of these hidden charms found in Puerto Vallarta and the Costa Alegre. Puerto Vallarta is a bustling mid-size Mexican city with beautiful beaches, glorious mountains that spill into the Bay of Banderas. 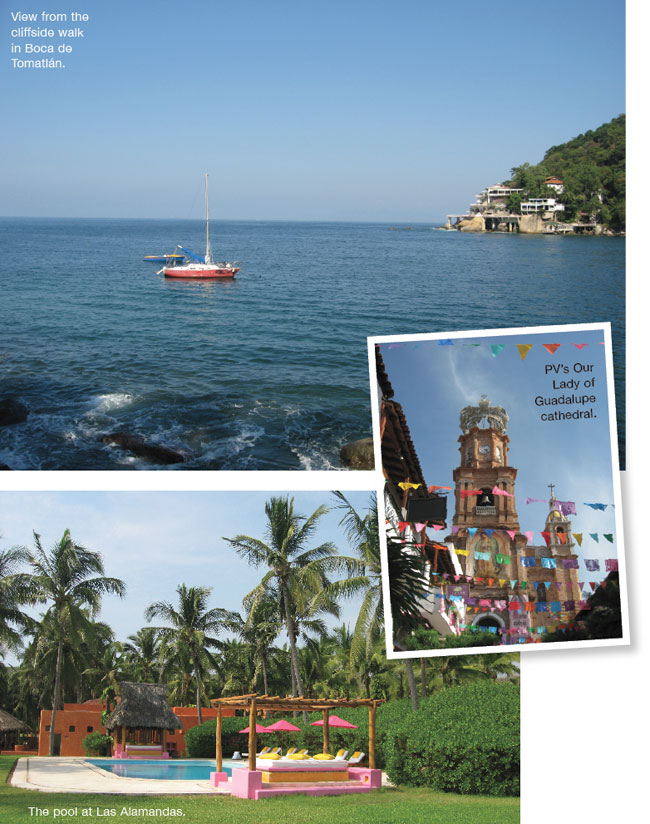 Puerto Vallarta is known for at least two things: It’s a popular stop for cruise ships—thanks in part to its starring role on the long-running television series The Love Boat—and it was the location for John Huston’s 1964 film The Night of the Iguana, which has been mentioned in every story ever written about PV (there, I said it). The film’s all-star cast included Ava Gardner, Deborah Kerr, and Richard Burton, who shacked up in town with his
soon-to-be wife, Elizabeth Taylor, for whom he bought a house called Casa Kimberley.

Long neglected, Casa Kimberley has been reduced to rubble and slated for redevelopment, but the rest of Puerto Vallarta is a bustling mid-size Mexican city with beautiful beaches, glorious mountains that spill into the Bay of Banderas, and wonderfully quirky architecture and fabulous food at every turn. Like most of the rest of Mexico, its tourism industry has suffered from the drug violence that has besieged the country, but in truth PV is much safer than many large American cities, and has a lot to offer beyond the din of the musicians performing for tourists along the seaside malecón.

San Sebastián del Oeste
I’m not the type of guy who likes to take group tours—too many fanny packs for me—but for my excursion to San Sebastián del Oeste, a former silver-mining town high up in the Sierra Madre del Sur mountains, I decided to leave the driving to Vallarta Adventures. It turns out the drive is a manageable—and staggeringly pretty—90 minutes, a vast improvement over what not so recently was a day-long trip (paved roads and an all-important bridge have shaved hours off the travel time). On the way we stopped at a small organic coffee plantation and toured the Hacienda Jalisco, where silver was mined in the late 1700s, contributing to the town’s enormous wealth. In its heyday San Sebastián had 30,000 inhabitants, its own branch of the New York Life Insurance Company, and Mexico’s first indoor toilet. After the last silver mine closed, in 1920, it became a virtual ghost town, which in some ways probably helped to preserve its whitewashed, cedar-scented plaza and gorgeous cathedral. Don’t miss the tiny, whimsical, fascinating “museum” run by the bubbly Maria Concepción del Carmen Encarnación Aguilera, a descendant of one of the town’s founders. 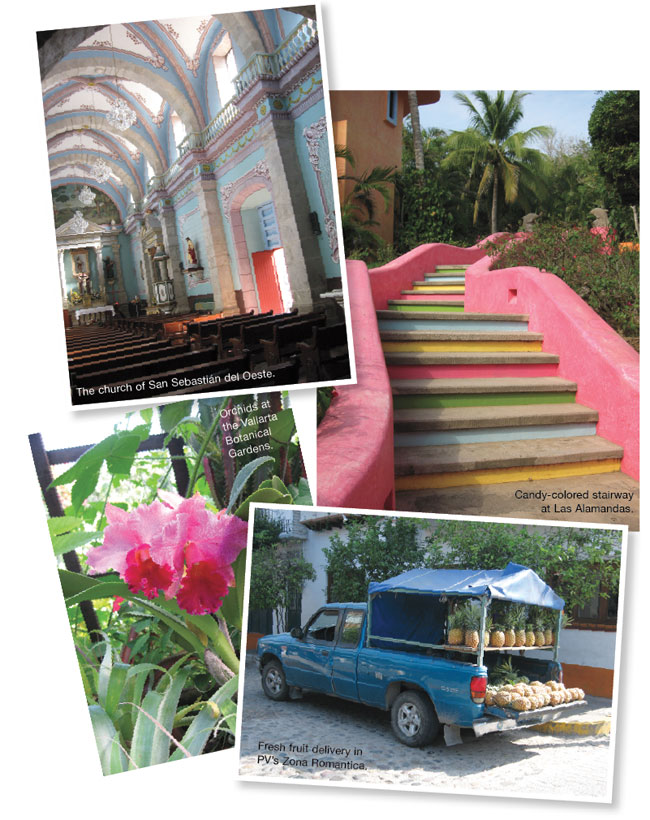 ¡Yo Quiero Comida!
PV is a food lover’s nirvana. At Cuale Paradise, tables are set alongside the Cuale River, an ideal setting for simple fare like shrimp tacos and a michelada, an iced cold beer doused with chili powder, lime, and salt. I ate twice at Esquina de los Caprichos, the food was so good. This slightly out-of-the-way tapas joint popular with both tourists and locals serves amazing papas fritas with a chili powder and garlic mayonnaise and piquillo peppers stuffed with tuna. At the Red Cabbage Café, also on the Rio Cuale and a little off the beaten path (yet hardly undiscovered), owner Lola Bravo serves up sumptuous, heady dishes like picadillo-stuffed peppers fragrant with pine nuts and raisins and topped with a heavenly carrot sauce.

You can dine on flavorful regional classics and even take cooking classes at La Luna, run by chefs Miriam Flores and Veronica Colin, in addition to indulging in a fabulous two-for-one happy hour. For just $5 I quenched my thirst one night with two margaritas mixed up by whiz-kid bartender Mauricio Aceves (his secret: a splash of Fresca). Around the corner, at Chenan2, I practically inhaled a trio of chicken quesadillas and fresh radishes and fried onions from the nearby public market (a must-see for anyone who wants to shop like the locals do). In addition to PV’s amazing array of libations like margaritas, cervezas, and jamaica—a refreshing iced hibiscus-flower agua fresca that you can find at street stalls and on the main plaza—afternoon coffee breaks are absolutely essential. For your daily fix you must go to Antigua Molienda. While it’s true that the little coffee shop’s beans are from Veracruz, not PV’s home state of Jalisco, any serious Mexican coffee drinker will admit without shame that café veracruzano is the best in the country.

Vallarta Botanical Gardens
As a full-time resident of a concrete jungle, I can never get enough of the real thing, so one morning I took a city bus to the Vallarta Botanical Gardens. In addition to winding jungle trails and a staggering collection of orchids (more species are found in Jalisco than in any other state in Mexico), such exotica as ginger, vanilla, pineapples, birds of paradise, and poinsettias grow in profusion here. Visitors to the garden are also urged to bring their swimsuits: After hiking through the densely planted hills you can plunge into the boulder-strewn “emerald pools” of the Rio Los Horcones, which abuts the property, then indulge in a hearty lunch at Hacienda de Oro, an open-air restaurant with staggering views.

The “Road” to Las Ánimas
It’s easy to take a water taxi to the tiny hamlet of Las Ánimas, a beachfront fishing village just south of PV that’s inaccessible by car. But you can also walk there. Seeking a bit of exercise to offset too many tacos and tequila, I decided to take a city bus (seven pesos, or about 55 cents) to the town of Boca de Tomatlán, where a trail meanders past stunning cliffside houses into the jungle. During the moderately challenging hike I marveled at a hulking papelillo tree, which has papery-thin, peeling red bark and is commonly called the tourist tree (a nice reminder to put on more sunscreen). Eventually the trail leads down to the gorgeous coastline, where I walked undisturbed for 30 minutes until rounding a bend and coming upon Las Ánimas. After diving into the surf and collapsing on the beach, I lingered over shrimp quesadillas in one of the village’s seaside restaurants and marveled at the ocean’s ever-changing beauty. (Yes, I took a water taxi back.) 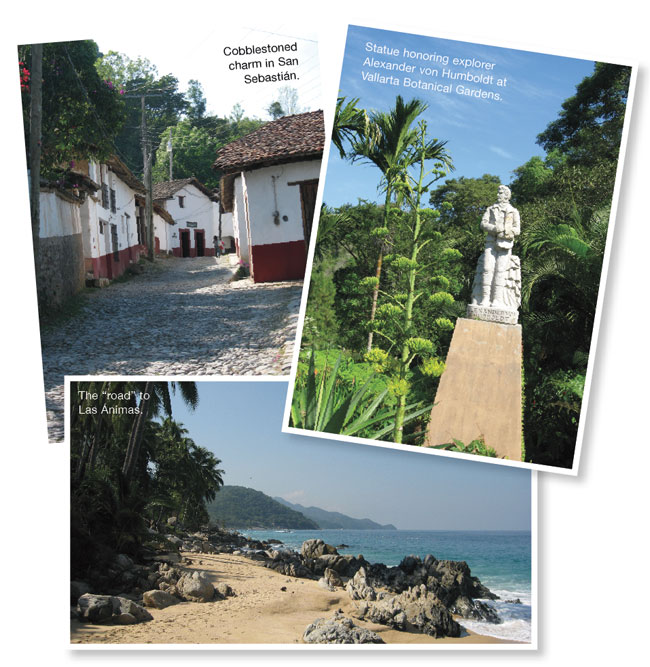 Las Alamandas
Talk about making a grand entrance. On my first day at this exclusive resort on the Costa Alegre, about a two-hour-drive south of PV, a Mexico City oligarch created quite a stir by landing his helicopter right on the beach. Turns out his pilot missed the resort’s brand-new helipad, which makes it a cinch to get to this vast stretch of the Pacific if one is disinclined to drive (the resort also has its own airstrip). Also noteworthy are two brand-new luxury suites, bringing the total to 17, but even when they’re fully booked you’ll hardly see a soul at Las Alamandas, where only about eight of the property’s 1,500 acres are developed. A virtual jungle preserve with four pristine beaches to choose from, it is loaded with natural beauty and wildlife. During my stay I saw a white-tailed deer, a snake (nonvenomous, thankfully), a so-ugly-it’s-cute tejon, and, to my great thrill, a trio of dolphins leaping out of the ocean.

Proprietor Isabel Goldsmith-Patiño, who inherited the land and is the visionary behind Las Alamandas’s vibrantly colored suites, runs the hotel almost like a private estate. At Las Alamandas you can do anything you want, which might be nothing more than lolling on the beach with a picnic hand-delivered to your blanket. The food is as healthful as “spa food” might be at an equivalently upscale resort, but you never feel like you’re counting calories as you tuck into just-caught fish in a tomatillo sauce, fresh-squeezed orange juice and sliced fruit at breakfast, or a bracing cold coconut lime soup at lunch overlooking the ocean (the vast majority of the food served here is grown on the premises). If I were to describe Las Alamandas in a phrase.