The Marchetti Family Comes Together Every Sunday to Celebrate Their Love of Food and Each Other! 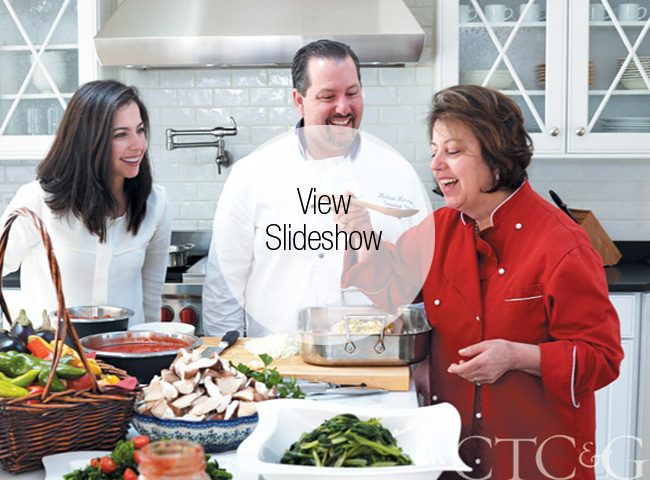 When famiglia Marchetti—Maria and Antonio, their six children and 16 grandchildren—come together each Sunday for dinner, they need lots of room to prep, cook and sit down together.

So when daughter Rosa and her husband, Frank, started planning a major kitchen renovation for their New Canaan home, they wanted modern amenities along with Old-World charm and lots of space. The Federicis’ kitchen and adjacent dining room were small and outdated, and opened onto an unheated sunroom. Frank envisioned industrial appliances, two-inch Danby marble tops on both islands, and lots of functionality throughout. After all, this kitchen was going to see plenty of action! “Frank made sure I picked out the best appliances,” says Rosa. “We even created one side of the kitchen just for baking, which is my passion. I love having my mixer pop right out of the cabinet.”

Maria and Antonio started their restaurant dynasty when her brother Michael Tarantino opened Rugantino, in Stamford in the early ’70s. In 1983, Maria opened Maria’s Trattoria in Norwalk. Antonio joined the family restaurant business in 1985 with the opening of Apuglia in South Norwalk. From there, they continued to expand with Columbus Park Trattoria in Stamford, Osteria Applausi in Old Greenwich and Tarantino’s in Westport.

Contractor John Cardillo, of Cardillo Construction in Stamford, oversaw the Federicis’ renovation project, completely gutting the kitchen and dining room. Family friend and NuKitchens designer Paolo Seixas helped Rosa and Frank with the kitchen’s layout, and another family friend, Franco Viola, designed their black granite farmhouse sink. The Federicis pored over design magazines and the website Houzz for color, lighting and furniture ideas. And they wanted to use the sunroom with its beautiful old brick floor. “We wanted to open everything up,” says Rosa, “so that even when we’re in the kitchen, we could all be together. The windows give views from every angle of the kitchen.”

What is a typical Sunday dinner for the Marchetti clan? Son Michael, executive chef at Columbus Park, is at the stove making a lamb ragu—a delicious tomato sauce with lamb that has been roasted until the meat is falling off the bone—and Maria is making her handmade cavatelli pasta. The entire family pitches in, and while all the prep working and cooking is going on, they start off with prosecco, a nice chunk of Parmigiano, and some dried sausage to snack on. Michael prepares an herb-encrusted pork roast with Barese-style chicory, onions, cherry tomatoes and Parmigiano. Broccoli rabe with garlic and olive oil is a typical side dish with the meal. Sometimes the family will get a lamb from their butcher in the Bronx’s Arthur Avenue section, where they also get produce for their restaurants. And of course, there’s dessert. Rosa likes to bake cookies, and she makes a traditional cake called torta di compleanno alla crema, layered with whipped cream and fresh fruit. “We live for Sunday meals,” says Rosa. “It’s a time for leaving work behind and enjoying family.”

The great success of Rosa and Frank Federici’s renovation is that it allows the entire family to be together after working all week in their restaurants. Sunday is their day off, and each week it’s spent celebrating parents, children, grandchildren, family friends and wonderful traditions.

A version of this article appeared in the January 2015 issue of Connecticut Cottages & Gardens with the headline: Tutti A Tavola.