The People's Project: A History of the Governor's Residence

"Basking in the wonderful sunshine of that lovely New England house made those four years one of the most happy periods of my life."    - Francesca Lodge, wife of Governor John Lodge (1951-55) 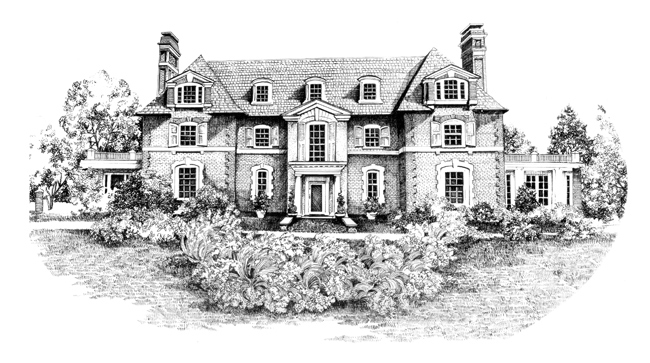 The Governor’s Residence was built in 1909 for the Hartford physician and industrialist George C.F. Williams.

Situated at the corner of Prospect and Asylum Avenues, the house was designed in Georgian Revival style by the Boston-based architectural firm of Andrews, Jacques & Rantoul and built at a cost of $337,000.

In 1916, the Hartford architects Smith & Bassett designed the north and south wing additions, and in 1927, an upstairs maid’s room was added. During its heyday, the three-story home stood on 14 acres that included a grass tennis court, a greenhouse, and a number of outbuildings. Today, the 19-room residence sits on four acres and has 15,000 square feet of living space with nine fireplaces, nine bathrooms, a pool, and a pergola. The Governor’s Residence is listed on the National Register of Historic Places.

A member of the Williams family lived in the house until 1940 when it became too expensive to maintain. The house then stood vacant for several years, though it was briefly used as a convalescent unit by the Hartford Hospital.

The idea of having a residence for the Chief Executive was first suggested in 1943 by Francis S. Murphy, the publisher of the now defunct Hartford Times. Governor Robert A. Hurley was living in a modest home on Outlook Avenue and Murphy, among others, thought that the Governor ought to live in a house more suited to his high office. After all, 45 states have governor’s residences. Since the Governor himself, with a salary of only $4,600, couldn’t afford such a house, a Search Committee was formed. After reviewing 30 properties, the Committee decided that the old Williams estate, even though it was run down, would serve admirably as the official residence. The state acquired it by paying $39,500 to Williams estate in lieu of back taxes. Another $75,000 was allocated for renovations that were undertaken by Hartford architect Carl J. Malmfeldt. The work took over two years to complete.

The first occupants were Governor Raymond E. Baldwin and his family, who moved in during September 1945. But the original restoration was less than successful and featured mismatched furniture in a wide variety of styles.

According to Governor Baldwin, the legislature had furnished his house politically, parceling out patronage to merchants in various towns by allowing each one to purchase some of the furniture. The results were such that Mrs. Baldwin told her husband that she would not move in. A neighbor, Beatrice Fox Auerbach, owner of G. Fox & Co., came to the rescue. She removed the offending furniture and brought in her staff of decorators to furnish the Residence with 18th century antiques and handcrafted reproductions. The finest pieces were made by Hartford cabinet maker Nathan Margolis, whose shop had already executed prestigious commissions for John B. Rockefeller, the DuPonts, and Yale University.

Soon after the Residence was furnished, the Governor invited the public to tea and 5,000 people showed up (the Governor, however, had strained his back and was unable to leave his bed to greet the guests).

Today, the Residence serves as a site for many official functions of the Governor and is an extension of that office. Conferences are held with legislators, business and civic leaders, and social functions are scheduled for residents from Connecticut as well as other states and countries. The Residence is also made available to non-profit organizations and there are guided public tours and an annual holiday open house.