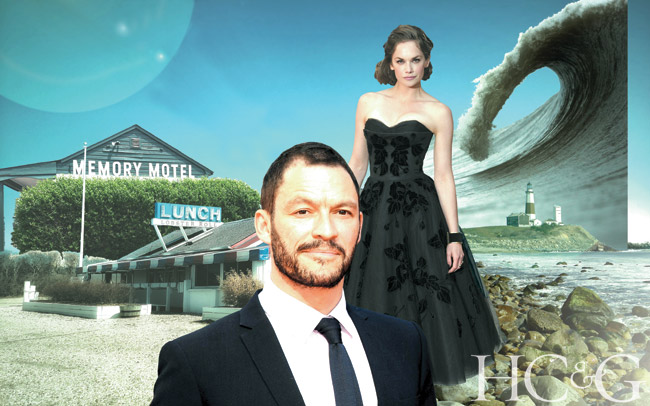 Gauging by the number of hit series about the luxe Hamptons lifestyle, it appears that America can’t get enough of the East End. First there was the USA Network’s frothy, feel-good medical dramedy Royal Pains, which premiered in 2009. Then came ABC’s deliciously campy Revenge, a thriller that just finished a four-year run. Not to be outdone, Showtime’s sizzling hot drama The Affair, which is set in Montauk (!) and premiered last October, has already won two Golden Globes. The much-buzzed-about show tells the torrid forbidden love story of a New York City public schoolteacher, Noah Solloway (Dominic West), and local waitress Alison Lockhart (Ruth Wilson). When not strolling around Montauk’s marina and plunking down $8 for homemade jam at the farmers’ market, Noah, a father of four and first-time published novelist, and his wife (Maura Tierney) make do in a Brooklyn brownstone, which Noah’s wealthy father-in-law pays for. In real life, Noah would likely never be able to afford the vacation spread the family stays at in Montauk, as it more closely resembles a 1.7-acre gated estate with panoramic views of Fort Pond Bay and Block Island Sound, currently listed for $8.999 million with Beate Moore of Sotheby’s International Realty and tricked out with a pool, a sauna, and a wine cellar. On his teacher’s salary, Noah might have much better luck landing a trysting place similar to Alison’s digs in Ditch Plains, such as the two-bed, two-bath ’70s-era contemporary on two acres that’s now on the market for $697,000 with Lorell Tutt of Seashell Real Estate. It even comes with the requisite outdoor shower, which TV viewers know is key.

Many scenes for The Affair have been filmed at Mickey Drexler’s 22-acre Deep Hollow Ranch, which the J. Crew CEO bought in 2010 for a reported $11.4 million. Earlier this year, it was being whispered that Deep Hollow and Drexler’s adjoining property, Eothan—purchased by previous owner Andy Warhol for less than $250,000 in 1971—were quietly on the market in a package deal repped by Paul Brennan at Douglas Elliman, who was involved in the original sales to Drexler. The two spreads boast more than 20 acres of agricultural reserve, 600 feet of Atlantic Ocean frontage, numerous barns, buildings, homes, and paddocks, and 200 acres of preserved land. Now that’s what you call an affair.

A version of this article appeared in the July 1 2015 issue of Hamptons Cottages & Gardens with the headline: Deeds & Don'ts: Putting on a Show.