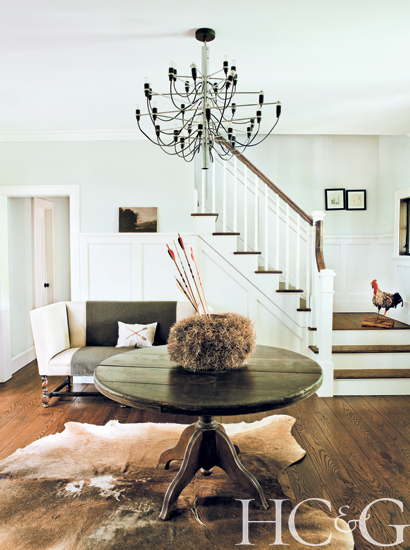 Shortly after Michael Cavaniola and Tracey Stehle met and began dating in 2001, he told her he had a house in the Hamptons and brought her out for a weekend. “There was a concrete slab floor, no furniture, and half the roof was gone,” he says of the 1950s Noyac bungalow he had bought two years earlier.  Tracey, a freshly minted interior designer, was unperturbed. “A raccoon had the run of the place,” she recalls. “Good thing I’m from Colorado.”

Since those rustic beginnings, the couple has come a long way, though not literally. The handsome, putty-colored 4,800-square-foot modern farmhouse they built six years ago is a two-minute walk through the woods from that original bungalow. They bought the acre-and-a-half plot in 2004, the same year they got married, had their first son, Vincent, moved permanently to the East End, and opened Cavaniola’s, Sag Harbor’s first gourmet cheese shop. 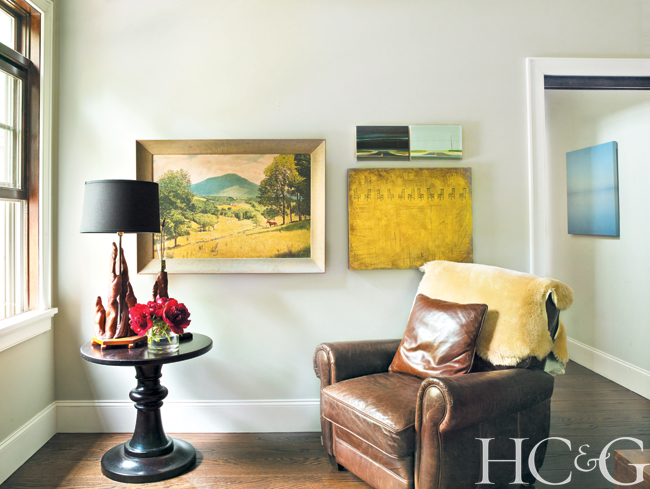 Michael, who has an architecture degree from Pratt Institute, decided to follow a path paved by his parents, Robert and Edwina Cavaniola, who ran a popular cheese store in Fort Lee, New Jersey, when he was growing up. In the past decade, Cavaniola’s in Sag Harbor has expanded twice, comprising three adjacent stores on Division Street selling everything from cheese to prepared foods to artisanal salt to wine. The freestanding wine shop, Cavaniola’s Cellar, “became an idea when the Umbrella House space became available,” says Tracey, referring to the oldest building in Sag Harbor, hit by a cannonball during the War of 1812. “We tell the story about it ten times a day.” The couple also has a market on Franklin Street in Tribeca, All Good Things, which opened in 2012. 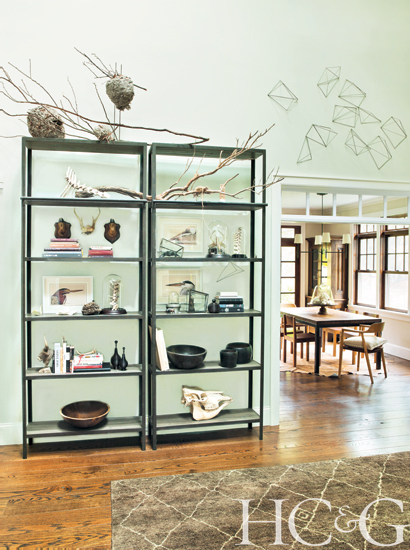 The shops have a warmth and charm similar to that of the Cavaniolas’ Noyac home, whose exposed beams and dark woods, adherence to a palette of subtle grays and earth tones, and vintage touches like wainscoting and Edison-style light bulbs give it a gravitas that belies its recent vintage. This is mostly Tracey’s doing. “She’s about color, furniture, and finishes,” says Michael, who designed the house after being inspired by a project in Southampton Village by the architect David Sherwood. “I’m about shape and volume. I always wanted to re-do a barn—it was a longtime dream. This house has some of that barn feeling.”

The heart of the home is a central living room with a 30-foot peaked ceiling spanned by hefty wood beams, anchored by a stacked-stone fireplace nearly as high. The impressive space is encircled by a broad mezzanine, off which four of the house’s five bedrooms are situated. All the ground-floor rooms, including the entryway, kitchen, formal dining room, and cozy family room, flow into this central area. As a parent, this has advantages, Michael says. “I like knowing where the children are.”

The sight lines within the house are exceptionally long. From the entryway, one sees through the soaring living room into the kitchen, and then, through French doors, to the bluestone patio beyond, topped with a pergola on which Merlot grapevines grow. Light floods in through skylights and an abundance of windows. “I wanted views of the outside from every room,” says Tracey. 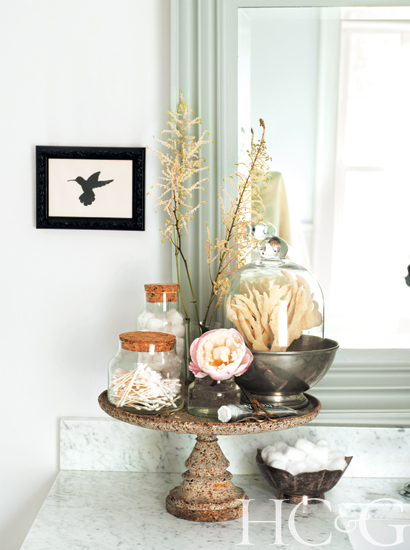 The tailored furnishings are offset by modern wire chandeliers and clear glass pendant lights, in addition to carefully curated accessories, such as a meticulously displayed collection of art by local artists and friends. Most memorable, though, are the quirky assemblages of bleached bones, animal skulls, wasps’ nests, and other natural specimens, arrayed on tables, consoles, and shelves. “None of this is purchased; it’s all found,” Tracey says—whether on trips out west, on Michael’s father’s farm upstate, or on local beaches, including a long narrow bone they believe is a whale rib, picked up by Spencer, the Cavaniolas’ six-year-old, on Sagg Main.

With these natural artifacts, Tracey creates oddly beautiful vignettes, arranged under glass cloches or among sheaves of dried flowers, reminiscent of still-life paintings of the Victorian era. “I’ve always loved birds, nests, feathers, and branches, which morphed into being aware of nature’s compositions, colors, and forms,” she says. “My kids come home with bones and feathers after playing in the woods. Other things come from friends and family who hunt. All the items in the house have a story and mean something special to me, though sometimes they freak out the kids who come over for play dates!” 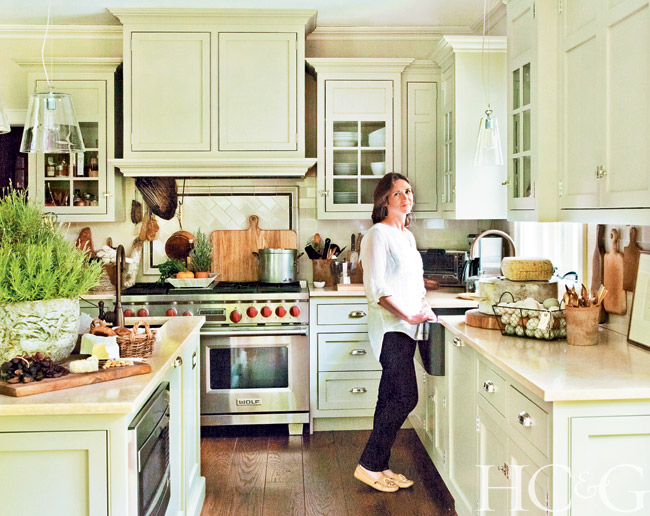 Even the utilitarian kitchen is deeply considered. It features farmhouse-style wood cabinets painted a pale sage green, which Tracey tracked down after spotting it at a showhouse. There’s a deep sink made of black stone and Caesarstone countertops in a warm tone called Buttermilk. “It replicates limestone without the maintenance,” she says of the latter. As elsewhere in the house, the wide-plank oak floors are stained a medium-dark walnut, with knots clearly visible. “The workmen started filling in the knots and we were like, ‘No, no!’” says Tracey. “We love the imperfections, and designed the house to get better as it ages.” Which is perhaps not surprising for a couple in the business of cheese and wine.

A version of this article appeared in the July 15, 2014 issue of Hamptons Cottages & Gardens with the headline: Into the Woods.

A Robert A.M. Stern-Designed Home Is for Sale in Greenwich