The Taming of Plum Creek Farm in Litchfield County 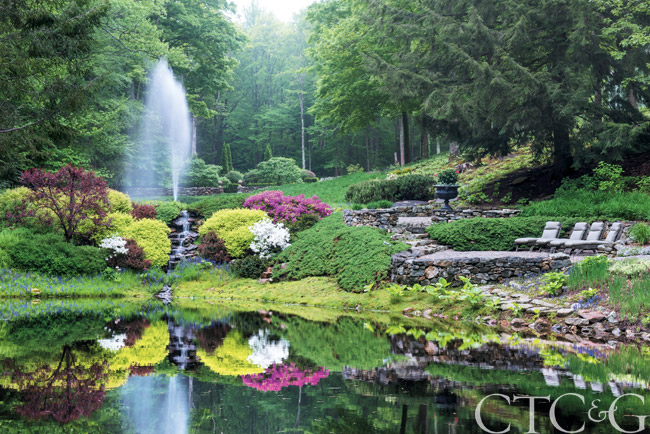 What happens when two gardeners make too many forays to Britain and return home laden with visions? An estate emerges and rocks roll. But first, they had to find a way in. Literally, there was no access to this Sharon property 30 years ago when Larry Power and Lea (pronounced “Lee”) Davies purchased the quintessential blank canvas. Instead of a swank house or even a driveway, the stone walls were the deal clincher. And it’s fortunate that the two found the on-site masonry so compelling, because the rocks played a starring role in the taming of Plum Creek Farm.

Not many new landowners would settle for a few years squatting in a barn while a house was being built. “Essentially, we were homesteaders,” Power summarized the time spent commuting between Manhattan and just-this-side-of-nowhere. But then, these two are do-it-yourselfers. Building the barn allowed Power to keep horses, which is why they purchased the property in the first place. Meanwhile, the duo could picture just the sort of house they had in mind—a vine-draped Colonial with two ponds on the side. 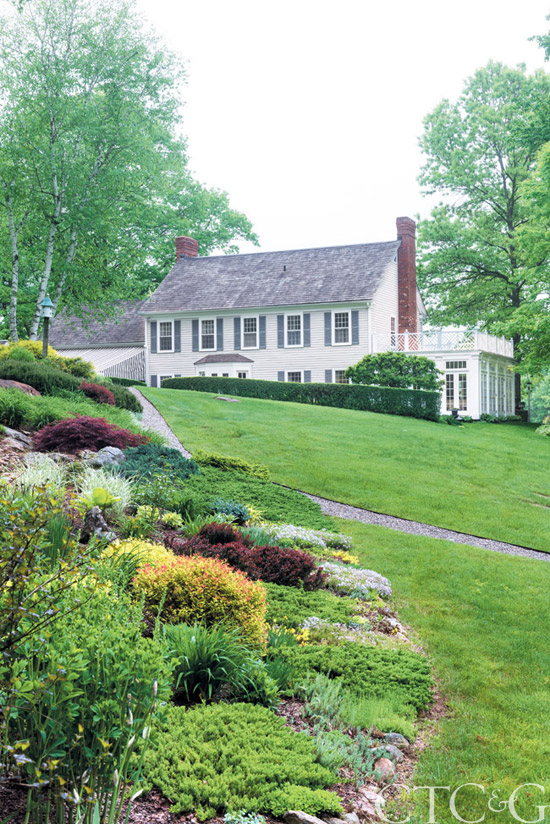 In actuality, no ponds existed in the 45-acre landscape when Power and Davies bought the property. But the geology gave them hope, and that promise was enough to feed their dream. However, other mountains needed to be moved first, starting with the challenge of engineering access, which entailed crossing a brisk brook twice. After orchestrating arrival without getting their feet wet, the two thought nothing of rising to the next round in the wrestling match and creating a home where there was nothing. While construction was in progress, they poured their considerable energies into putting in a viewing perennial garden behind the future footprint.

Actually, Davies is the plantsman in the team, growing up in a Virginia family with green lineage. “One grandmother smoked and drank, the other was a teetotaler. The only safe topic of conversation was gardening,” he says. In the process of keeping the peace, he received a full education in how to work the land. And Plum Creek Farm offered more than ample opportunity to test his knowledge. Taking inspiration from the property’s contours, they backed the prototypical perennial with an undulating privet hedge at a time when curves and hedges were rarely mentioned in the same breath.

They were barely able to savor installation when another project suddenly appeared on their plate. During construction, they realized that a full frontal garage was not the greeting they wanted upon arrival. Swooping the driveway around to approach the garage from the side required significant blasting of stone. The pile of rubble that resulted might have blown anybody else’s gasket. But Power and Davies just went straight into rock-garden mode. 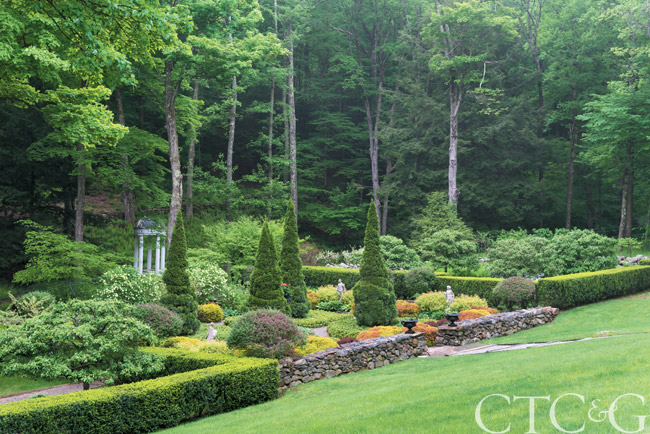 Those two gardens were the first stops in a landscape that gained attractions every time they returned from vacation. They travel abroad often, always returning with some tidbit from a magnificent estate that could be translated at Plum Creek—with a little maneuvering and lots of outlay. Eventually, they got the ponds of their dreams—complete with water jet. Planting around the ponds was never in question: They had visited a prototype in Britain, and blossoms along banks reflected in water were what their vision was all about. At that point, it had to be low maintenance because gardens were proliferating on the acreage. Actually, Larry Power is an expert in keeping things first-person but relatively painless, having coauthored The Low-Upkeep Book of Lawns and Landscapes with Elvin McDonald. At Plum Creek, he put his theories to the test, dividing hostas, daylilies and more to swarm in lush carpets.

The international exchange of ideas continued to flow. Following the couple’s “most expensive trip to Britain,” they installed a three-part formal English garden in homage to Sissinghurst, with low-maintenance pachysandra as a groundcover around a tapestry of evergreen and deciduous shrubs. There, they got an axis or two out of their system as well as exercising their need to shape shrubs into neatly clipped forms. When the farther hill needed cosmetic surgery, a trip to Scotland inspired another investment, and the dome from a New York City Catholic church was converted into an eye-catching folly, thanks to some columns from Michael Trapp.

Those are just the highlights of a property bejeweled with botanical bling. Perhaps a lot of inspiration was borrowed from abroad, but nothing is lost in translation. And, given the close-knit maturity of smart, saturation-coverage planting, Power and Davies can pretty much sit back and bask in the splendor. Nowadays, Plum Creek Farm would give any manse a run for its money.

A version of this article appeared in the March 2014 issue of Connecticut Cottages & Gardens with the headline: Plum Perfect.