The World of Wölffer

Establishing the East End as a must-visit wine destination

A trip to Wölffer Estate Vineyard off Route 27 in Sagaponack transports visitors to the grand wine châteaus of Europe. Set among 55 acres of sloping vineyards, the spectacular Tuscan-style winery was modeled after the world’s top wine estates by founder Christian Wölffer. As horses from the adjacent 100-acre Wölffer equestrian center trot through the vineyard rows at sunset, it’s hard to believe the establishment is approaching its 25th year in business.

Besides the pristine beauty of the property, Wölffer has become an in-demand location for events and social networking. With more than 1,000 active members in its two-tier wine club (Grand Prix and Hunter) and a new offshoot for millennials (the Hidden Cellar Society), Wölffer is like a Club Med for oenophiles—barrel rolling at the Harvest Party for wine lovers and their kids, walks in the vineyard, festivities at the stables, costume parties at Mardi Gras, and pop-up wine events. On Twilight Thursdays in the summer, Hamptonites relax on the terrace overlooking the vineyards; on Sunset Fridays, they sit on the lawn listening to live music at the wine stand around the corner on Route 27. And the estate has long been the scene of weddings among the vines and major charity blowouts, like Chefs and Champagne, under an enormous white tent. 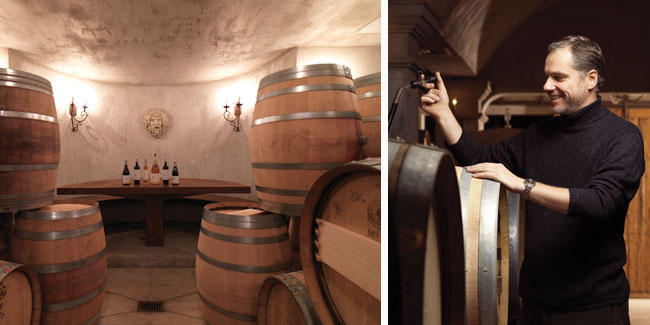 Four years ago, the picture at Wölffer wasn’t so promising, when the visionary Christian Wölffer was killed in a boating accident in Brazil. John Nida, who became manager, and longtime winemaker Roman Roth were determined to continue Christian’s legacy. Nida has since doubled wine sales with a portfolio that includes 14 wines—the celebrated chardonnays and merlots, single varieties and blends, rosés, and sparkling wines in méthode champenoise. The winery produces 25,000 cases annually, 9,000 of them rosé, for which Wölffer is widely lauded. “The 2011 vintage has an orange-gold hue,” says Roth. “It’s elegant, with a lot of expression.” This summer Roth is launching a flavorful new wine, White Mischief, made from chardonnay fermented with wild yeasts.

“In anticipation of our 25th anniversary, I made an Amarone, which will be long-lived. It’s a massive wine, an elegant powerhouse,” he says. “And I’m aging the 2009 vintage of Noblesse Oblige sparkling.” In honor of the estate’s founder, Roth has used the best vineyard blocks to blend Christian Wölffer Cuvee Merlot 2008 ($100) and the Christian Wölffer Cuvee Merlot 2005 in magnum ($190)—the latter the most expensive bottle in the Hamptons. When it comes to East End wine territory, Wölffer clearly has terroir down pat.