This Branford Garden Boasts an Unexpected Mix of Magnificent Flora 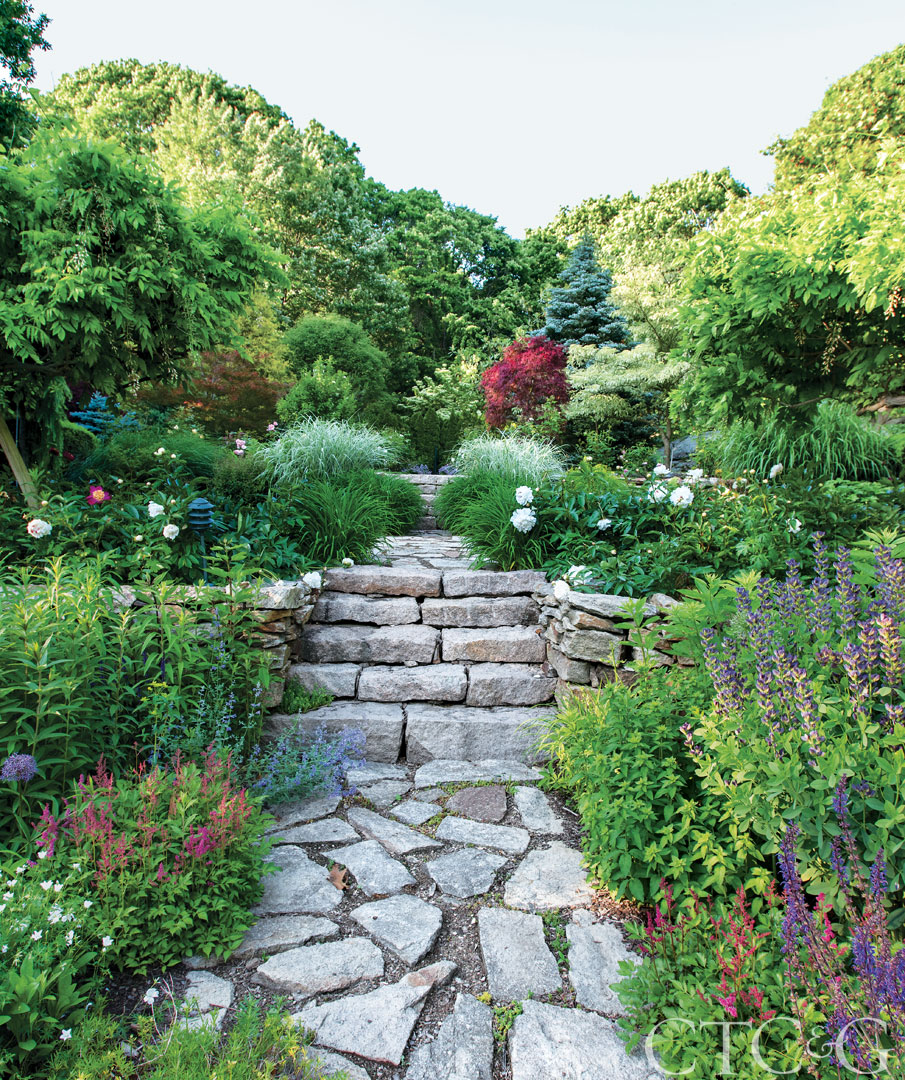 A veritable forest of connoisseur Japanese maples greets as you roll down the entry drive of this Branford home. Stroll toward the sea, and neatly clipped specialty shrubs that you’ve never encountered before seemingly sprout from massive rock faces. Stand on the terrace, and you are overlooking a several-tiered formal garden bristling with heirloom peonies. Wander to your left, and the air is infused with dozens of aromatic roses. Wander to your right, and a rare American wisteria and 10 varieties of clematis clamber the garage walls. Michael Rosenthal’s garden is that uncommon mix of magnificence and museum. But initially, it merely started with the resolve to embrace home ownership with a vengeance.

When Michael Rosenthal took the plunge to purchase a weekend home in 1981, he promised to do the property proud. With two young children and working 60–70 hours a week on Wall Street, three acres in disrepair was daunting. Nonetheless, he dove headlong into the challenge. Every Friday evening to Sunday night, he set out to personally whip the landscape into shape.

Actually, Rosenthal was almost duty-bound to buy the property. For years, he had visited his college roommate in Branford and very vocally admired the house next door. When that property finally came up for sale, turning it down would have felt downright disloyal. What came with the house was the remains of a once-formidable formal garden with the great structure of century-old yew hedges and stone work, but elsewhere, wild roses, ivy and barberry were growing out of every rock crag. He spent the first few years cursing the invasives while also questioning his leap into land ownership. “I knew nothing, it was the steepest learning curve,” notes Rosenthal. Not only was his education an upward scramble, but the property is defined by massive, ruggedly handsome granite outcroppings. Initially, he couldn’t fathom how to handle what he hoped was a hidden gem. 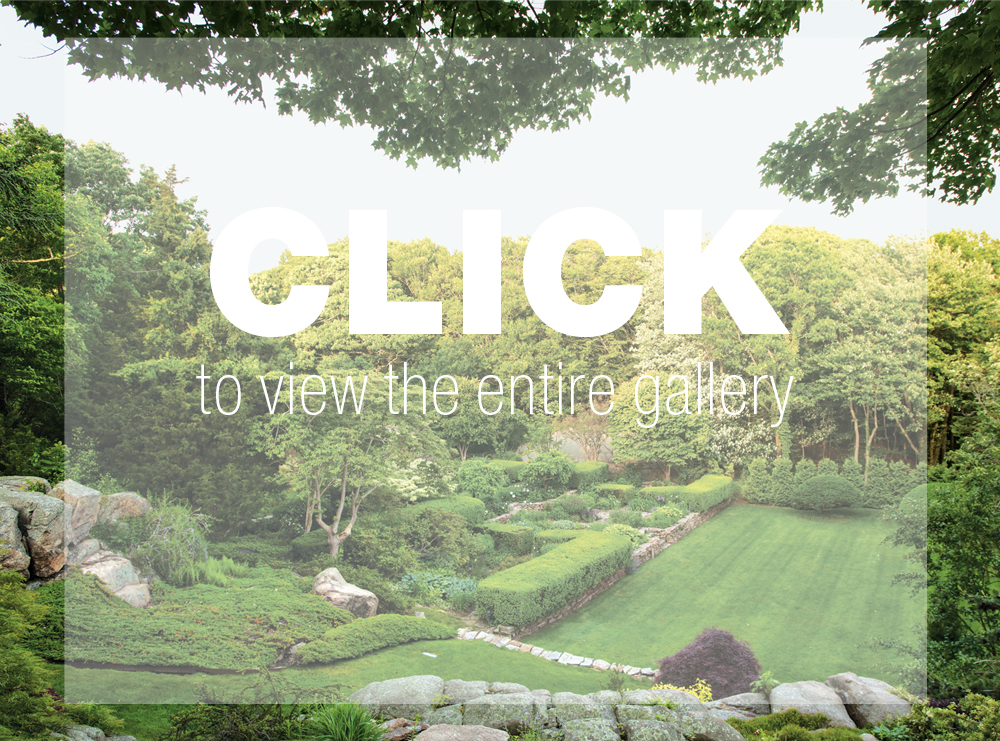 Meanwhile, Rosenthal was rubbing shoulders with some seminal gardeners, most notably landscape architect Lester Collins, famed for crafting Innisfree Garden in Millbrook, NY, who came to Branford for a look-see. Collins’ insights into perspective, form and structure informed the ultimate shape of Rosenthal’s garden. The piece of advice that really resonated from that visit was Collins’ suggestion to stop trying to tackle the whole landscape. “Rather than taking on its totality, he advised small projects,” recalls Rosenthal. “That made so much sense.” Dutifully, he grappled bit by bit. He renovated the formal garden, keeping the magnificent hedges and walls. Then, he ripped out a vegetable garden, transitioning its terrace to showcase 75 varieties of fragrant roses. Gradually, he reclaimed and replanted. And that’s how the obsessions took root. Ultimately, the three acres would host 55 Japanese maple varieties, 40 hosta cultivars, 25 hydrangea hybrids, and 20 viburnum varieties. But who’s counting?

A love for Japanese maples soon spiraled into all manner of woody shrubs. “Mostly, I just became a plant addict,” he admits. “If I see something interesting, I buy it.” Deliveries came by the truckload—all to be planted by the do-it-yourselfer before the family returned to the city on Sunday evening. “I keep imagining that I’m going to run out of space. But somehow, I find openings.” He filled in a former garage and quickly requisitioned that footprint. When trees are removed due to age, he is distraught for a minute and then rushes in with replacements. His masterpiece of carefully hewn beauty makes the former description of “disrepair” virtually unimaginable.

Most people would have tidied up the view and called it a day. Instead, in addition to the unusual plants, this Branford property boasts broad sweeps: Juniperus procumbens ‘Nana’ neatly hems ledge and spills down to the water, while deftly clipped evergreens frame vistas. Meanwhile, Rosenthal has no intention of bridling his fervor in the near future. “Gardening has creative, intellectual and physical elements that not much else offers,” he enthuses about a hobby that has pretty much swallowed him up. The results are palpable and heart palpitating.

A version of this article appeared in the May 2017 issue of CTC&G (Connecticut Cottages & Gardens) with the headline: A Growing Concern.