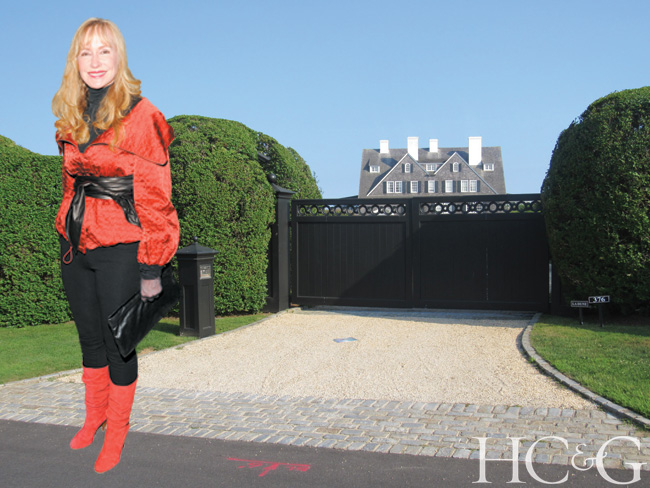 In a highly unusual development, a 1.8-acre oceanfront estate is possibly going back to the bank. Louise Blouin’s La Dune, at 376 Gin Lane in Southampton, is reportedly on the chopping block for an estimated pre-foreclosure price of $12,454,090. The owner of Louise Blouin Media, the publishing company responsible for Art + Auction and Modern Painters magazines and the art website BlouinArtInfo.com, has been sued for allegedly not paying her bills, though her personal fortune is estimated at $600 million and she is routinely cited as one of the wealthiest women in the United Kingdom, where she makes her home.

Nicknamed the Red Queen for her sartorial flair and off-with-their-heads management style, Blouin has had a storied history with the 10,900-square-foot house, which has reportedly been in lis pendens since late 2014. (Manhattan’s Reed Smith law firm is managing the sale.) Designed by Stanford White, the five-bedroom, six-bath home was previously owned by advertising titan Carl Spielvogel and his writer/activist/producer wife, HC&G contributing editor Barbaralee Diamonstein-Spielvogel, who sold it to Blouin and her second (now ex-) husband, John MacBain, in 1988, though the couple tried to back out of the $11.7 million deal after the area was ravaged by storms. Yearly taxes on the property, which was assessed at just over $20 million in 2013, reportedly hover around $68,000. Blouin’s four-bedroom penthouse duplex on Charles Street in Manhattan, designed by architect Richard Meier, is also on the market, listed for $40 million.

A version of this article appeared in the Auguts 15 2015 issue of San Francisco Cottages & Gardens with the headline: Deeds and Don't: Fleetwood Affair.