This Manhattan condo is all about modernity, light and spectacular views of the Hudson 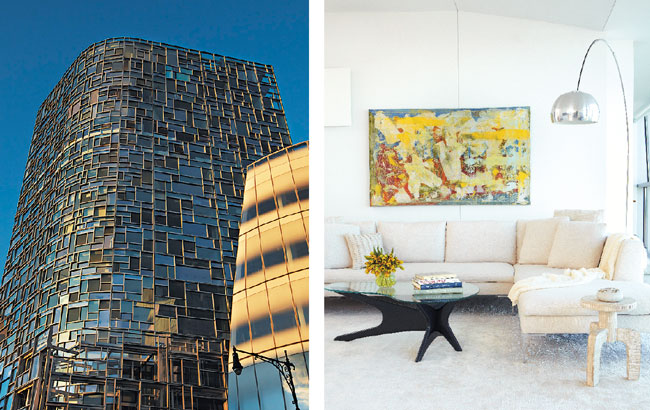 A View From The Top
In this living room in the Jean Nouvel–designed tower 100 Eleventh Avenue, B&B Italia’s Charles sectional is lit from above by an Arco floor lamp from Design Within Reach. The vintage Adrian Pearsall cocktail table is lacquered in Benjamin Moore’s Evening Sky; the hand-knotted rug is from Doris Leslie Blau.

Repeat customers come back to decorators for any number of reasons, but it took a heavy rainstorm and a major leak to get one of Marie-Christine McNally’s clients to make a somewhat urgent request for a command performance. “One night he woke up and it was raining on him,” recalls McNally, whose Manhattan-based firm, Marie-Christine Design, specializes in projects in New York and the Hamptons. Water cascading from the unit above his apartment in the West Village destroyed nearly everything he owned. “It was a disaster.”

The client, who works in finance, quickly found a new condo rental at 100 Eleventh Avenue, the striking Jean Nouvel–designed 2010 Chelsea high-rise with a fragmented surface of 1,700 glass panels. “His old apartment
had been fairly modern in style, though the building was traditional,” she says. “But this structure is all about modernity, and light, and spectacular views of the Hudson. I think he was ready for a change.” 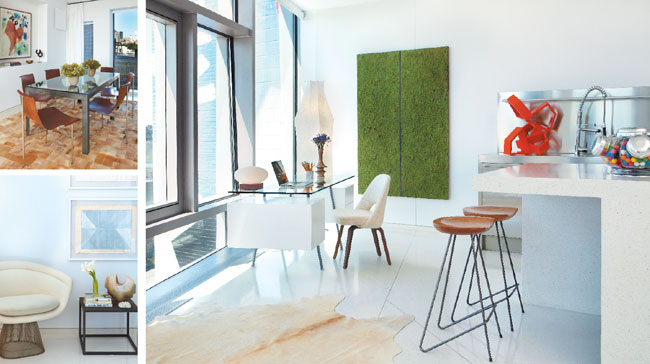 Winning Compositions
A suite of TG-10 chairs by William Katavolos surrounds a steel and glass table in the dining room, formerly a bedroom (upper left). A sitting area (lower left) features a vintage Warren Platner chair, an oak and metal side table from ABC Carpet & Home, and framed works from Ruby Beets. A corner of the kitchen (far right) has been reconfigured into a “home office,” including a desk from Design Within Reach and a cowhide rug from ABC Carpet & Home. The paper floor lamp is from Flos; the bar stools are from Anthropologie.

McNally’s client moved in “with only a mattress,” says the designer, and wanted his creature comforts back as soon as possible. However, the gleaming Nouvel edifice posed certain challenges. “The space is expansive, but not orderly, because of all the odd angles,” says McNally. “You have to create your own sense of order.” To do so, she devised a single dominant seating area anchored by a hand-knotted Nepalese rug (“It adds texture without visually overwhelming the space”) and a Charles sectional from B&B Italia, from which visitors can enjoy views of the river. “The floors were a silvery gray cement,” adds McNally, “so we pulled that color into all the fabrics and accents.” In a nod to the Nouvel tower and the river below, she painted the client’s vintage Adrian Pearsall cocktail table a dark blue-gray. The kitchen is small, so McNally created more space by moving the dining area to one of the apartment’s three bedrooms. (Hidden accordion doors allow it to be closed off from the main living area.) Next, she reconfigured the kitchen’s “eat-in” section into a home office and installed a Niels Bendtsen desk from Design Within Reach, which she lacquered white. 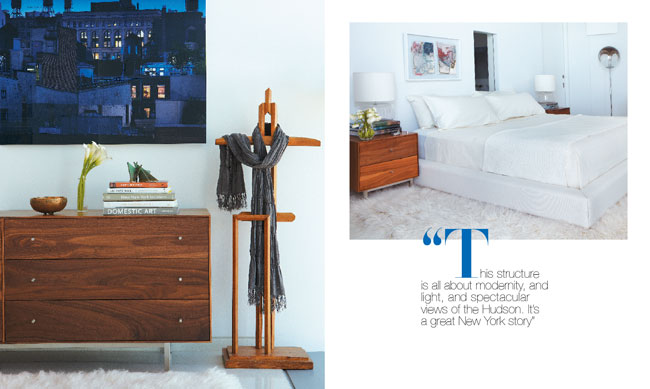 Rest Easily
In the master bedroom, David Drebin’s Gotham City hangs above a Hudson dresser from Room & Board. The vintage valet is by Guillerme et Chambron. Marie-Christine McNally designed the bed, which is upholstered in Donghia’s Faro and dressed with organic cotton linens from Coyuchi.

The master bedroom had no shortage of quirks, either: Only one wall could accommodate a bed, and it had a window in it. So McNally designed a custom bed, with no headboard, and accessorized the space with nightstands and a dresser from Room & Board and a thick wool flokati from Ruby Beets in Sag Harbor.

Change is indeed good, it would seem, as McNally’s client “had a nice one-bedroom apartment, lost everything, and practically overnight moved into this open space with phenomenal views in the hippest neighborhood. It’s a great New York story.” Plus, she adds, her client, once a confirmed bachelor, is happily married now—to an architect who works at home.