This Minimalist Shelter Island Contemporary Is All About the Views 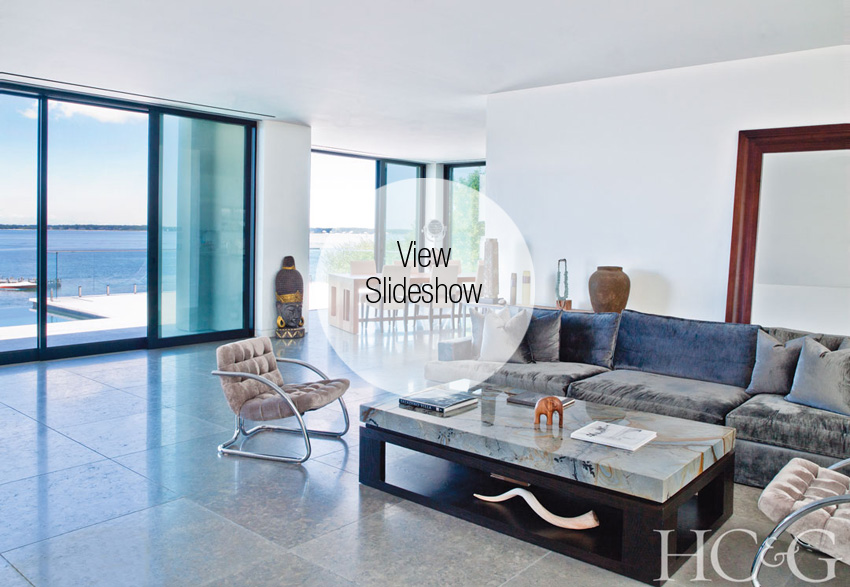 With its endless right angles and walls of windows in every direction, Kristin Kehrberg and Dick Tarlow’s house on the far west side of Shelter Island is pretty much the opposite of a Victorian. Which is fitting, because the couple already possessed two Victorian houses on Shelter Island and were looking for a change of pace.

“We were ready to live very differently,” says Kehrberg, who owns a Victorian in nearby Shelter Island Heights. Tarlow’s Victorian lies right next door to the modern marvel he and Kehrberg began building in 2013. He shared the 1890s manse with his late wife, Sandy Carlson Tarlow, his partner in a series of ad firms that honed the clubby, rarefied image of Polo Ralph Lauren, an account reportedly worth $10 million by the late 1980s. Working with top photographers such as Bruce Weber, Herb Ritts, and Patrick Demarchelier, the Tarlows perfected the Ralph Lauren take on the good life in print and TV ads, while also handling clients such as Johnson & Johnson, Revlon, and Victoria’s Secret. “We did all of Ralph Lauren’s advertising, and 30 years of that heightened my taste level,” says Tarlow, who retired in the early 2000s.

Tarlow has acquired “local” status on Shelter Island—not such an easy thing to pull off—where he has lived full-time for 33 years. He was a partner with his next-door neighbor, André Balazs, in the trendy Sunset Beach boutique hotel and restaurant, which the two launched in 1997, after bemoaning the lack of good restaurants on Shelter Island. The hotel’s eatery, with its breezy South of France vibe, instantly became one of the hottest spots in the Hamptons and is still going strong today.

Tarlow and Kehrberg met at the restaurant in 2007 and married two years later. Dreaming of a pared-down beach lifestyle, they bought the lot next door to Tarlow’s Victorian. With the help of engineer Jess Butler, his architect brother, Dan, and Owen Construction, the couple built a wide-open, unabashedly modern 13-room house, inspired in part by their home on St. Barth and a visit to Philip Johnson’s Glass House in New Canaan, Connecticut. Designer Vicente Wolf, a close friend, helped out with ideas for the design and materials. “It was a change,” Tarlow says. “We’d lived in big Victorians and wanted something much cleaner and more open to the outdoors.”

Plopping such a contemporary structure in the midst of a cluster of gingerbread-trimmed Victorians was a bold move. The house sits on a hill studded with historic rambling piles, originally designed for wealthy Brooklyn beer barons as an escape from the New York summer heat. “The brewers wanted to find the best breeze on the island in the summer,” says Tarlow, adding that the “houses were all built around each other during the same period. Our house is the only modern one on the street, which some people were not so happy about at first. Some things were written in the local paper. But after it was done, the same people said, ‘Wow, we really love it.’”

It may have helped that the street side of the house isn’t as attention-grabbing as the side facing Peconic Bay, suggests Kehrberg. “When you see the back of the house, from the water, it looks much larger and more interesting,” she says. “The front is very subtle by comparison.” From every angle, orienting the architecture to maximize the views was the ultimate goal. “The concept of having nature become the focus was very compelling to us,” Kehrberg continues. “On Shelter Island, where do you have a more beautiful view than when you’re looking out at the water? We decided that would be our ever-changing canvas. We just wanted to feel like you could be outdoors even when you’re indoors.”

To that end, the couple and their architects employed lots of wood, metal, stone, and glass, and wide expanses of bare floors. “We loved the idea of a ‘concrete’ look,” Kehrberg says. “The same stone inside appears outside, around the pool, so it really locks in the concept of bringing both spaces together.” The color palette complies, too, down to the fabric choices for the furnishings. “We went for natural earth tones, so that the eye would go toward the water, rather than stop within the interior rooms.” The furniture, mostly by Raul Carrasco, is “very tailored, yet large and chunky and a little formidable—once he places a piece, it’s not moving! But in such a big, open space, that can be really grounding.” The kitchen, which lies adjacent to the open living room and dining area, is a minimalist jewel, with “everything hidden away”—from coffeepot to toaster—“so that it just feels like it’s seamlessly integrated.”

Despite the vast walls of glass and stone and crisp, clean lines, the place is anything but a monastery. Rather, it’s a welcoming backdrop for the couple’s energetic, eclectic art collection. Finds from their travels in Africa, India, and Thailand—including Buddha figures, which Tarlow says he’s drawn to because of their calm, serene appeal, and “not so much as a religious thing”—mix with quirky displays including a World War II machine gun and a Russian Ural motorcycle. A monolithic, yet sculptural tree trunk from Africa leans against one wall, while another displays graffiti art by Mr. Brainwash (a Warhol-esque portrait of Kate Moss), and yet another a giant blowup of the Capri waterfront. There are also Shepard Fairey metal etchings and photos by Tarlow’s old chums Weber and Demarchelier.

“Even the garages are sculptures, in a way,” Tarlow adds, alluding to the double garages that frame the entry courtyard. “They’re beautiful, with incredible glass doors.” Mirrored and artistically lit, they house a de facto car museum that includes a mid-20th-century Jaguar convertible, a Bentley, an Audi R8 sports car, and “a safari car like you’d use in Africa,” among others. The couple enjoy whizzing around the island in the safari vehicle with kids and grandkids in tow, along with their “beast,” a Rhodesian Ridgeback named Nelson, after humanitarian Nelson Mandela. Tarlow was once part of the Elders, a group whose mission was to work for peace and human rights, with Mandela as honorary chairman and members including founders Richard Branson and Peter Gabriel, in addition to global leaders such as Kofi Annan and Jimmy Carter.

“The most beautiful art we have, however, is the trees,” Tarlow adds. These include stands of 30-year-old willows, in addition to “a lot of big, beautiful old trees that have been there forever.” More recently, he and Kehrberg installed a birch grove. “It’s all about different tonalities of green,” Kehrberg says, emphasizing that too much color would be a distraction from the staggering views. “There are mornings when the sun is rising, and we nudge each other awake and say, ‘Open your eyes.’”

A version of this article appeared in the July 1, 2016 issue of HC&G (Hamptons Cottages & Gardens) with the headline: Taking Shelter.