This Old Lyme Property Had All the Ingredients for a Stellar Estate, Given a Little Imagination and a Lot of Creativity 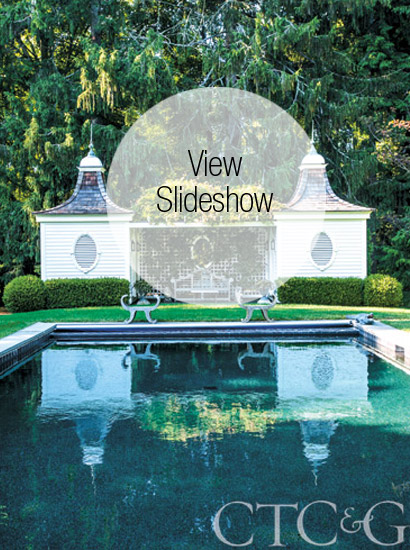 When Philip and Robin Schonberger began their quest for the perfect property, he asked her if focusing on waterfront homes might be apropos. Although Phil had never lived by the shore before, Robin grew up on Long Island and anything near the Sound smells and feels like home. “Saying yes took me one nanosecond,” she notes.

Not surprisingly, the 1927 Colonial Revival along the Lieutenant River in Old Lyme was instantly approved by Robin, but Phil needed some convincing before he would relinquish his long-standing ideal of a brick Georgian house. The row of 80-year-old welcoming maples along the drive finally won him over. For Robin, it was the river’s slow ripple effect that had her hooked. But a close runner-up was the fact that the 10-acre parcel (including an adjacent 4-acre land trust meadow) lacked any plantings beneath the mature trees. Although she has no love affair with lawn, the blank slate gave the former art director free rein to throw herself into the delicious challenge of composing a fitting landscape.

The property clearly was once thoughtfully planted, although no gardens per se remained. Several august trees above and beyond the maple allée were in long-time residence at Longmeadow and they were preserved. In fact, the arboreal element gave Robin her theme to treat the property as an arboretum. At respectful distances from the resident trees, she tucked in her selection of junior woody accents. With a definite bias toward weeping anything (including weeping beech, katsura, birch and larch), she began inserting a meaningful understory, bringing the frame of reference down to earth. That was the first step in harnessing the entire property in what became a promenade of intimate pathways opening into heart-halting vistas.

When an immense boulder was removed, it was the obvious place to insert a pool. They went for a straight rectangle but got curvaceous with the pool house. A pair of antique finials served as starting points for twin pavilions with uniquely shaped pagoda rooflines connected by a wisteria-bowered lattice arbor. A Lutyens bench has just the right scrollwork to serve as a focal point in the axis, while a pair of Asian Emperor chairs echoes the Eastern mood established by the rooflines. That’s Robin’s input. On the other hand, Phil is also represented—with a lifelike alligator at the water’s edge, as well as a parade of bronze penguins at the far end.

What followed was a circuit of outbuildings accented by antiques. A plain vanilla shed did not fit with the program beside a house that gained bumped-out rooms and importance. So the shed sprouted columns, gained a Palladian window, and was fitted with glass doors to become a swank folly/potting room. Similarly, a sparkling jewel box conservatory took the place of a hot tub to create a cosseted indoor garden, complete with succulents and tropical plants surrounding a resident cherub.

In true manor spirit, promenades connect the spaces, with an occasional foxglove and nepeta accent along the way. But primarily, the gardens are green, composed of boxwoods, hostas and foliage plants that have long-lasting interest. The various topiary, espalier and weeping forms are particularly effective within the broad context of gardens each dominated by a custom-designed structure.

But that’s not to say Longmeadow is lacking color. To the contrary, containers spill with various colorful characters of the botanical kind. And there’s an interlude in early summer that is decidedly syrupy when the rhododendrons bloom in conjunction with the mountain laurels to form floriferous clouds. Their billowing masses frame the true star of the show, the shimmering Lieutenant River. On a recent Garden Conservancy Open Days tour (Longmeadow will be open again in 2016, visit gardenconservancy.org for more information), someone asked Robin why she hadn’t added a water element to the delights on site. Her straightforward answer: “I’ve got a water feature—it’s called a river.”

A version of this article appeared in the May 2015 issue of Connecticut Cottages & Gardens with the headline: Branching Out.