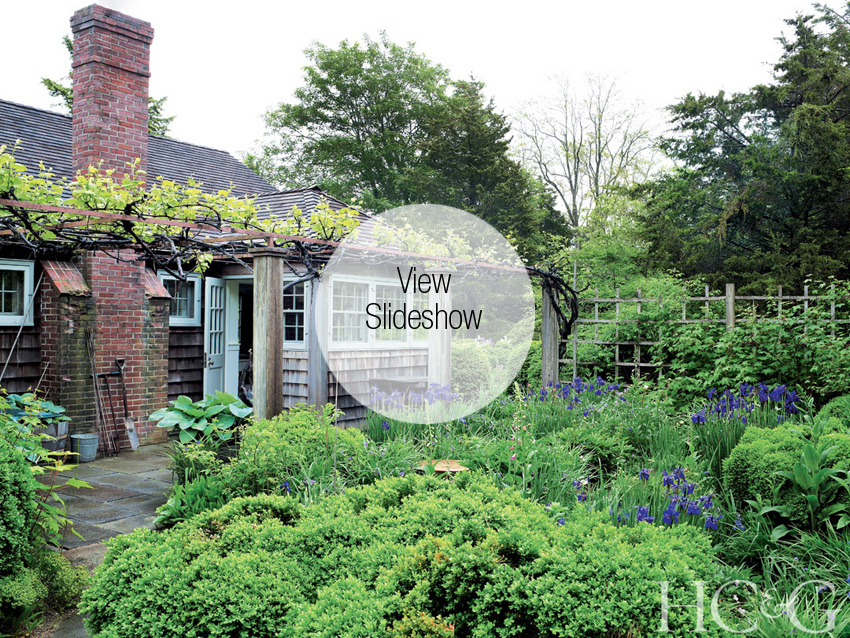 In 1980, when the German-born artist and landscape designer Robert Jakob and his then-partner, David White, purchased a small cottage in Springs, they hadn’t exactly stumbled upon their dream home. Dating from the early 1940s, the white cinderblock structure wasn’t much to look at, just one large room with a beamed ceiling, a small makeshift bedroom, and a bathroom. The couple had essentially bought the place on a whim.

“We had friends here and would come out to visit, and then we decided to rent something on our own,” says Jakob. “This house was available, and as we negotiated the rental, we were also told that it was for sale. We thought, Oh, we could buy it—that might be nice. A friend lived down the road, so it seemed like a good idea. We didn’t really consider any other houses.” They paid $75,000.

Thirty-three years later, some things remain the same—foxes, raccoons, chipmunks, and deer frequently roam the property; ospreys, warblers, cardinals, and other birds fly above. Yet much has changed: The home is now on four acres rather than two (an adjacent lot was purchased later); the once-humble grounds are stunning and fragrant, brimming with flowers and specimen trees; and a renovation expanded the house, adding a basement, a lovely guest room/library, and a “tower” with a new master bedroom and bathroom. Cedar shingles now sheath the exterior, and raw pine planks replaced the concrete floors, lending more warmth. Rafters were stripped of wood, exposing iron beams. And French doors were added to three sides of the house to provide easy access to the beautifully planted grounds. (Jakob has never felt the need for air-conditioning and tends to leave the doors wide open.)

But now Jakob lives here alone. About five years ago, White, who works for the Robert Rauschenberg Foundation, moved out. The couple had been together for 45 years. White now lives just down the road with a new partner, yet he and Jakob remain friends and see each other often.

Although Jakob admits to longing for human companionship, he has carved out a rich life for himself—working on landscaping projects for clients on the East End and spending part of each year at his other home in Italy, in a town called Itri, south of Rome. In Springs, he is preoccupied with his vast garden—a sea of irises, roses, foxgloves, peonies, geraniums, forget-me-nots, lavender, and more. To wander through the property is to feel lost in its wild beauty. There are also dozens of varieties of shrubs and trees, including five European beech trees that were a 50th birthday gift for White. Some 20 years later, they thrive and loom large.

Jakob is philosophical about loss and change, a fact he credits in part to his years of tending the land. “This garden is hard to tame,” he says. “You can put in a few straight lines, but they get quickly erased by the way things are in nature. It keeps changing. You can control things to an extent, but then you have to let go, give up. It is a constant challenge.”

An accomplished painter who has shown at the Drawing Room in East Hampton, Jakob sees things a bit differently when it comes to his work. “One tends to want to be in control, if you make a painting or a drawing,” he says. “Yet things happen that you don’t plan for—they just sneak in. But you can erase them, fix them, paint over them. In nature it’s different, because things never stand still and you can’t do anything about them.”

When he isn’t in the garden, Jakob can be found painting or drawing in the small studio behind his house. His work varies stylistically, but he is best known for his oversize, abstracted botanicals in acrylic with arresting colors, gestural lines, and an almost violent splattering of paint—calling to mind Springs’ most famous artist resident, the late Jackson Pollock.

In his home, Jakob displays his own art and works by contemporaries he admires, including Mary Heilmann and Keith Sonnier. Otherwise, the interior is sparsely decorated and furnished. It is a weathered home with few adornments, designed for an ascetic life—one of simple pleasures. “Is it restorative being here?” says Jakob. “Yes, I believe so. I go out and look at my garden, and I can edit or add something if I wish. I feel lucky. This is my canvas, in a sense, and on the whole it’s very pleasing.”

A version of this article appeared in the July 2013 issue of HC&G (Hamptons Cottages & Gardens) with the headline: An Artist And His Garden.