This Sky-High Apartment is Completed by a Serious Art Collection 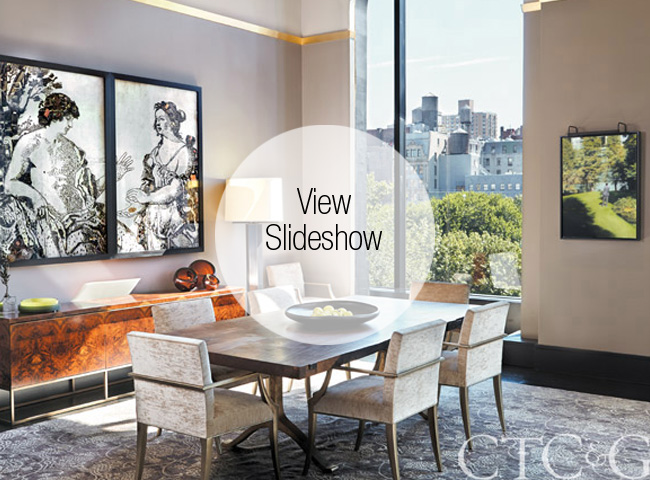 Melanie Foster’s collaboration with her client began with a few sniffs, barks and some tail wagging. We were both walking our dogs in the same Greenwich nature preserve as we do every day, and we literally bumped into each other,” says Foster. “I’ve made many friends in the woods over the years, and I could tell right away that Melanie and I were kindred spirits,” recalls Foster’s eventual client, a woman who lives with her husband in Greenwich, but who also owns a weekend pied-a-terre in Manhattan. “Dog people are friendly.”

She invited Foster to her house, and upon learning Foster was an interior designer in town, commissioned her to design several rooms. Then, once the client and her husband purchased an apartment in the former 19th-century Tiffany headquarters building on Union Square, she hired Foster to transform it.

When the client opened the door to the 2,300-square-foot, two-bedroom space, with its 17-foot ceilings, arched windows that one Realtor called “the best windows in New York,” and vigorous industrial forms, “I saw a big white square box,” says Foster. Baubles and stained-glass masterpieces may once have been made in the former Tiffany space, but now all was blank.

Foster recognized immediately one of the apartment’s defining features that she worked hard to preserve and exploit. From the entrance, a panoramic skyline announces itself, highlighted by the prominent clock face on the Con Edison Building. “I didn’t hang any curtains on the windows or put a pendant lamp at the entry or a chandelier over the dining table because they would have impeded the view and the innate drama of this space,” says Foster.

While the clients’ art collection would naturally become the apartment’s chief visual feature, the outside view was as much a work of art, with the windows serving as virtual canvases of the cityscape. “Our design directive was to bring the colors we saw outside these great windows inside—the blue of the sky, greens of the park, the grays, browns, terracottas of the buildings—and Melanie achieved that goal beautifully,” the homeowner says.

Foster chose a largely neutral palette for the furnishings, though no piece could be said to be ordinary. She designed a coffee table using parchment paper, installed teak wood cabinetry with custom bronze handles, covered kitchen stools with a terracotta hide, and used stone as the backdrop within a prominent entertainment/display cabinet, the niches of which are set with ancient Buddha heads and a Tang Dynasty horse. The designer gold-leafed a narrow seam within the window frames as well as a molding that wraps the room. “It may seem an extravagant touch, but it creates a glow and absorbs light in a way that simple gold paint doesn’t,” she explains.

The homeowners are serious art collectors but, as Stacey Gershon, their longtime art consultant states, “Unlike most collectors who wish to live in a blank space where the art takes over, their directive was to create a home where the artwork completes the space rather than determines it.” The client echoes this by adding, “We don’t buy art to decorate with, nor do we decorate around existing art. We buy pieces we love, and because of Melanie’s expert work, the collection we have and the design of the apartment came together fortuitously.”

An art-wall hallway links the two bedrooms. Foster fashioned a master suite that was romantic in feel, with a decidedly feminine bent, but without being “too girly girly.” Employing a silk wallpaper, hanging pendants over the matching pen-shell bedside tables, and using an upholstered tufted headboard to create a soft intimacy, Foster chose artworks that further the feminine effect, including a Kiki Smith and a nude photograph by the client.

“We love looking at our art, but we also love living here as a family,” says the homeowner. “The apartment first had to be comfortable and welcoming. Melanie took this vaulted space and made it our home.”

A version of this article appeared in the November 2014 issue of Connecticut Cottages & Gardens with the headline: A Perfect Union.