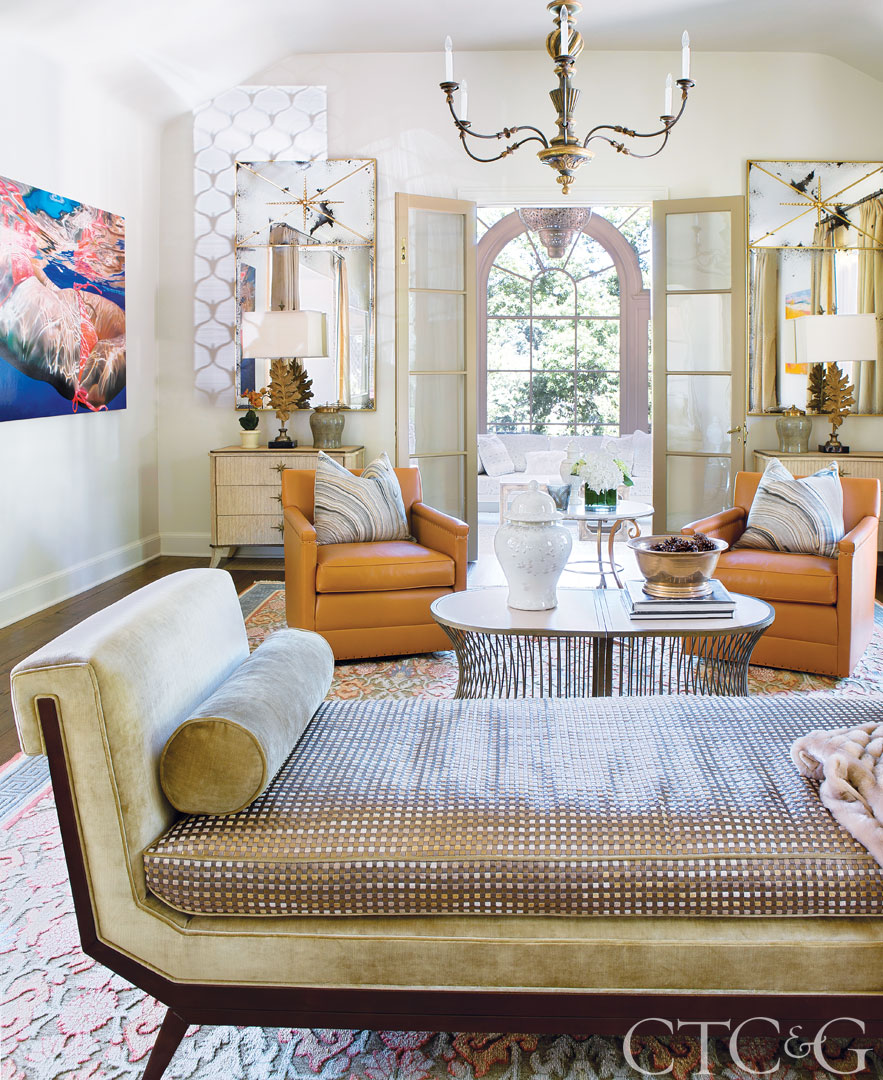 Whereas many family members might gather in the evenings to watch a movie together or retreat to separate quarters to work on computers, this Fairfield County family often goes dancing. Disco dancing, to be precise. In what was once the library of this circa-1925, Mediterranean-style house, music is pumped out on a state-of-the-art sound system so that the parents and their four children, along with friends and myriad cousins, might dance together.

Although there is not a revolving mirrored ball in what is now referred to by the family as the disco library off the entry foyer, the home’s interior designer, Greenwich-based Cindy Rinfret, installed a chic, multi-armed brass and glass light fixture affixed to a modern take on a coffered ceiling. Both the clients and their children wanted this to be a big party house, where, as the client herself says, “we can have fun every day, entertain friends, but also be ‘us’.” Rinfret stresses, too, her client’s wish that “nothing be or feel at all stuffy, but instead playful. There’s always a hustle and bustle inside the home.”

What was originally built as a spacious suburban house meant to replicate an Italian villa more typical to the Mediterranean coast than the banks of Darien’s Five Mile River was not, however, an anomaly of the time. “There was a long tradition of substantial, well-detailed Mediterranean houses built in New England,” says Paulo Vicente, a Fairfield-based architect who doubled the size of the house to its now 9,000 square feet, taking much of the structure down to the studs in the process. “Architecturally, we can’t make an exact version of such a residence in Darien, given our climate. Our goal for this expansion and renovation was to create the kind of courtyard you’d find in an Italian Mediterranean villa and have rooms that overlook water, in this case the river.” 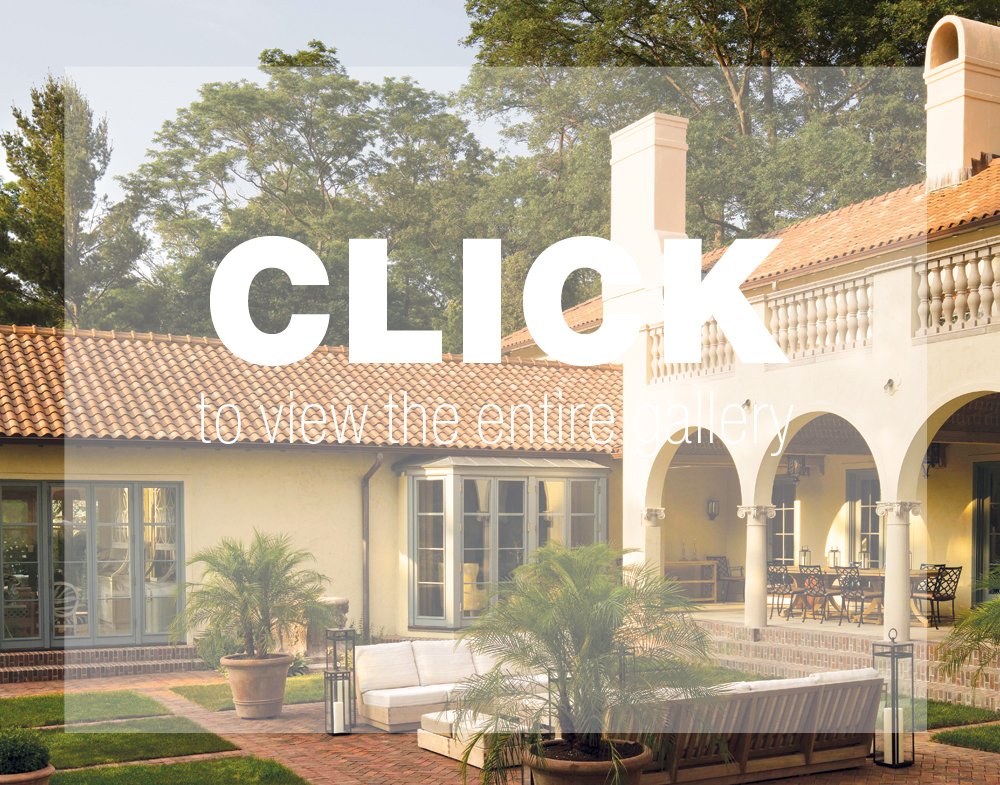 Vicente and Rinfret worked together, too, to fashion an interior floor plan that was both traditional yet open. “She wanted to be able to use every room and not just have some rooms be ones that you pass by and look into,” explains Rinfret.

Rinfret took exterior cues for much of her work inside the home. The blood-orange tiled roof, for instance, is referenced in a daybed and armchairs in the living room. Vicente’s choice of blue-gray shutters on the exterior are echoed in the disco library’s painted bookcases, contemporary artworks and furnishings in a Palladian-windowed family room, one of the chief architectural additions to the home. While many architectural and decorative details hark to Italian motifs, such as a printed Venetian-style wallcovering in the master bedroom, it is in the family room, in particular, that a more international feel is established, reflective of the family’s wide-ranging global travels.

“By complete coincidence, the client and I had been in Morocco at the same time,” says Rinfret. “She bought an incredible Moroccan chandelier and I bought sconces, all of which now light the room in a very sexy way at night. The jewelry of any house is the light fixtures. The hardware you use tells you immediately about the quality of the house as a whole.”

Another conspicuous detail introduced throughout by Rinfret are various metals—antique brass, satin nickel, and wrought iron that appear on everything from interior French doors, master bath fixtures, and hardware on a kitchen island as vast as a Mediterranean isle. “I like to mix metals in my projects,” says Rinfret. “Metals don’t date a house. The material grows into the interiors and ages well, assuming a patina.”

The client points out that while the house already has a certain history to it in that silent screen star Rudolph Valentino once lived there, it is the history that she and her family will create that matters most to her. “We had already lived in the neighborhood 10 years,” she says, “and always admired the house for its villa style. When I started working with Paulo and Cindy on the renovation, my goal, the whole time, was to make a house where memories are made in every one of the rooms.”

A version of this article appeared in the January 2017 issue of CTC&G (Connecticut Cottages & Gardens) with the headline: Party Perfect.