This Waterfront Rowayton Home Is All About the Views 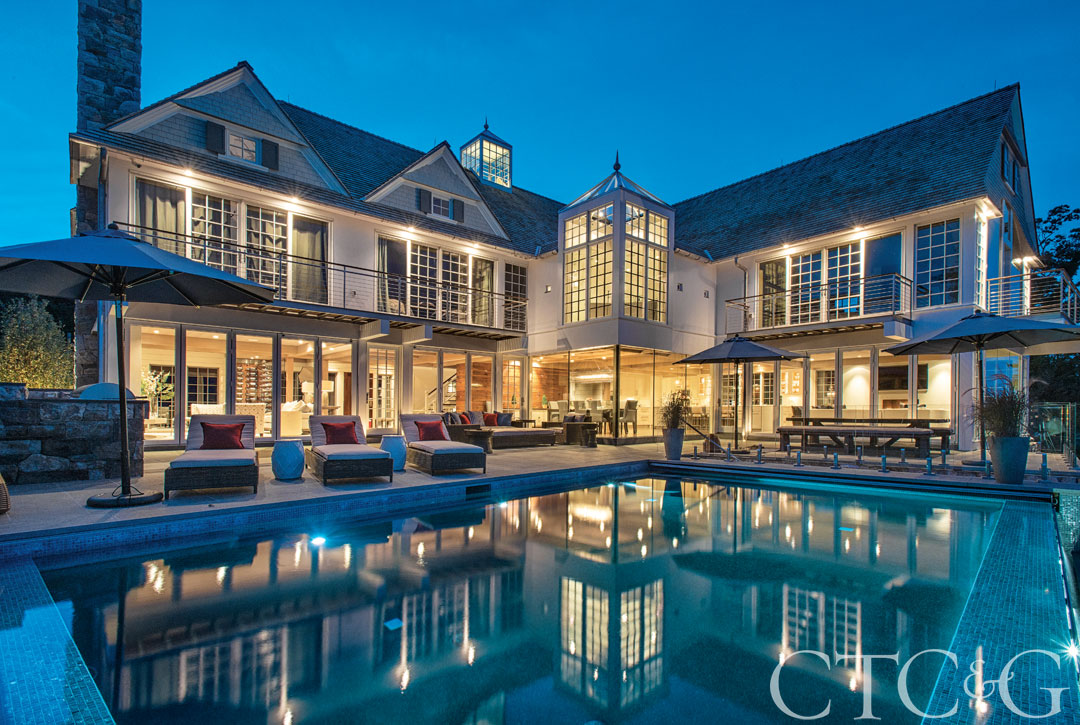 Shingle-style houses are as common along the Connecticut coast as sandpipers and sailboats. While we tend to think of these homes as charming relics of 19th-century America, they were really rather revolutionary in their day, offering a sleek, sinuous counterpoint to conventional Victorian excess.

Rarely has Shingle-style felt as radical, however, as in a recent Rowayton home designed by Christopher Pagliaro of Pagliaro Bartels Sajda Architects in South Norwalk. While the front façade features symmetrical gables framing an eyebrow dormer and quaint rooftop monitor, the rear feels as exposed as an x-ray—its sheathing peeled back to reveal diaphanous walls of floor-to-ceiling glass that are as evanescent as a soap bubble.

Perched atop a vertiginous bluff bordering Long Island Sound, the 7,500-square-foot home overlooks a panoramic expanse of twinkling water, bobbing boats and serpentine shoreline that’s pretty breathtaking—even by the high standards of this postcard-pretty village. And Pagliaro doesn’t sacrifice a single opportunity to celebrate the scenery, wrapping the public spaces in glass walls that dissolve any distinctions between interior and exterior.

Stepping through the front door, the traditional Shingle-style façade gives way to a more contemporary entry hall, where cable railings wrap the main staircase in a nautical embrace. To help define the living areas within the open plan, Pagliaro varied ceiling heights and finishes, capping the main-floor rooms with fir treated with a weathering stain for a sun-drenched, beachy feel. 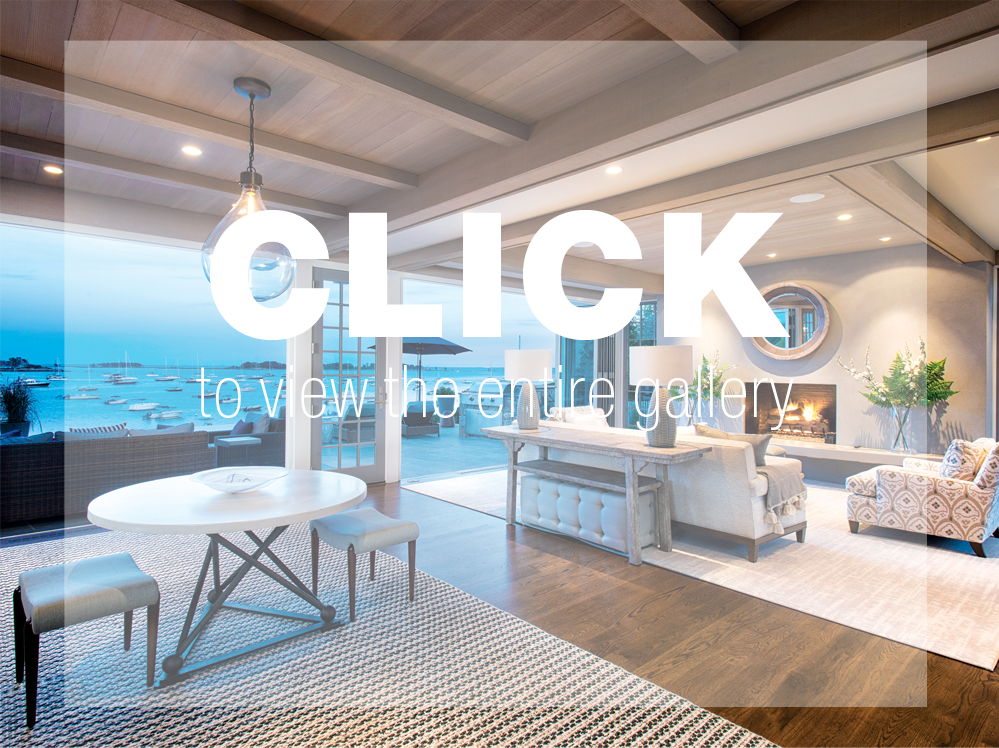 Visible supports are all but absent, allowing window walls to flow nearly uninterrupted—and, in several instances, to fold out of the way altogether. “There’s an incredible amount of steel framing,” acknowledges contractor Ryan Fletcher of Fletcher Development in South Norwalk.

While the kitchen sits in full view, its pale gray cabinets and matching marble counters manage to impress but not impose. Since the owner wanted to enjoy the scenery while he cooked, Pagliaro inserted a cooktop into the sprawling, 16-foot island (“It’s not an island,” he quips. “It’s a continent.”) and installed a flush ceiling vent above, so nothing blocks the view.

Interior designer Amy Aidinis Hirsch of Greenwich was tasked with bringing warmth to the rooms without stealing focus from the vista. She kept the palette neutral in accordance with the clients’ wishes, but introduced subtle hints of color and texture—opting for nubby wool carpeting and fabrics like mohair and chenille that are both sensual and durable. “The owner wanted to be able to put his feet up and not worry,” Hirsch says.

Expanses of dusky walnut punctuate the interior, grounding spaces like the dining room, where a coffered fir ceiling supports a tiered crystal chandelier that looks like raindrops suspended in midair. In the neighboring family room, a pair of A. Rudin chairs with woven rattan backs add a welcome touch of texture, while the cobalt mohair upholstery lends a dash of color—and echoes the natural palette of sky and water beyond.

Sky and water dominate the views from the upstairs master bedroom, which seems to hover over the surroundings like a bird in flight. The outside scene is so magnificent that the homeowners were reluctant to install window treatments, finally opting to forgo them altogether. “They weren’t really concerned about the privacy,” notes Hirsch.

That’s a good thing, considering the fact that their bathtub is planted smack in the middle of a whimsical glass tower that overlooks the rear patio. From there, it’s possible to look down on the Chinese granite terrace and the swimming pool, which was hammered out of solid rock. Because the view extends to both the south and east, Pagliaro designed the pool with two disappearing edges—so no matter which way you look, the surface of the water blends into Long Island Sound.

The family maintains an active interest in golf, and even has a room dedicated to it on the lower level, where a projection screen and built-in swing sensors let the residents simulate the experience of playing on the world’s most beautiful courses. While the technology is impressive, it can’t surpass the natural beauty beckoning just outside the door.

A version of this article appeared in the April 2017 issue of CTC&G (Connecticut Cottages & Gardens) with the headline: By the Sea.