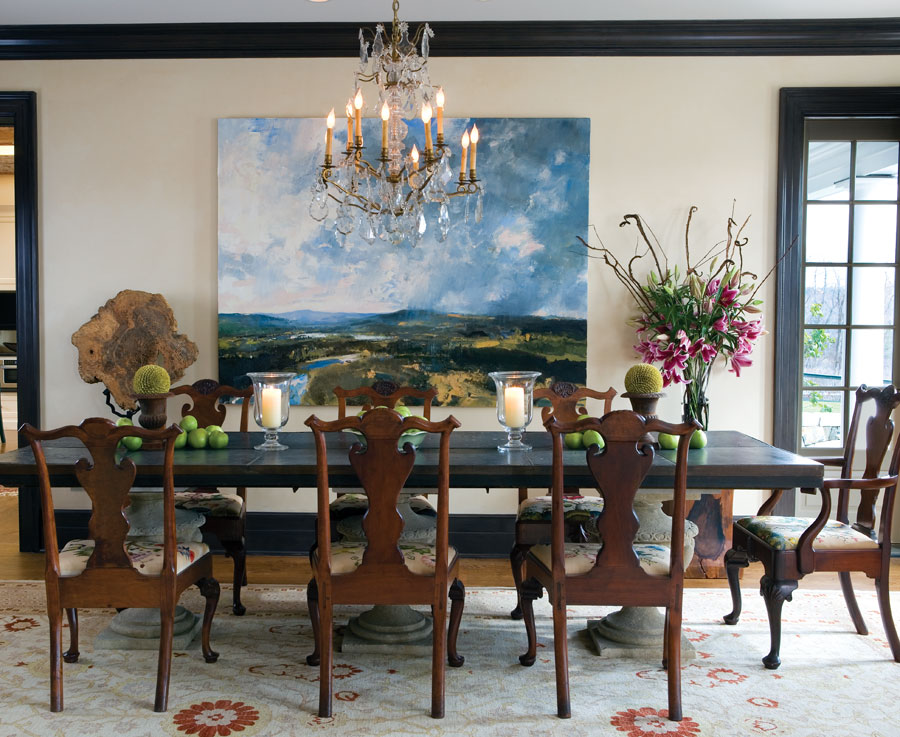 When the dream of acquiring a 58-acre property suddenly came true, these Litchfield County homeowners had to act fast. They’d been eyeing the acreage for years and now they had the chance to purchase it and build the home of their dreams. Their search for the right architects led them to Louise Brooks and Vincent Falotico.

Building a home on such a large piece of land and making it look like it has always been there takes a sensitive touch. The homeowners immediately put their home on the market when they acquired the new property. It sold quickly and this busy family of five rented for the next three years while they were planning and building their new home.

The wife had been struggling to find an architect who could design a house that would meet all their requirements. When daughter Bailey returned home from school one weekend, she suggested they visit Brooks’ residence. She was best friends with Brooks’ daughter Maddie and had spent a weekend there. She knew her family would love it, and that Brooks would keep going back to the drawing board until things were just right. Her mother agreed, and she particularly appreciated the architect’s sense of space, balance and proportion. "They wanted gracious rooms with beautiful views of the lake," explains Brooks, "and the house to be in the vernacular of Litchfield County."

Most importantly, the family wanted their new house to look like it had always been there, to have the charm of an older home that was as well established as a country manor house. It took a team to make that happen–builder Rob Winters, interior designer Michael Trapp and the architecture firm Brooks & Falotico Associates. The family wanted a house that would function well for them for the next 20 years, with a master bedroom on the ground floor and rooms for the children on the second floor so the upstairs could be closed off while they were all away at school.

Another requirement was a large kitchen. The husband, a former restaurateur and contract pilot, loves to cook and entertain. The family didn’t use their living room much, and it was more important to have the family room, eating space and kitchen as the focal point of the main floor. "One thing that the husband insisted on was a counter-height fireplace in the kitchen for grilling," says Brooks. "He wanted commercial appliances, and a highly functional kitchen was essential for him."

Trapp and Brooks agree that the wife’s involvement was a big part of the success of the design. A jeweler and busy fundraiser, she found the time to shop for accessories, research wall colors and go shopping with Trapp. She had always admired Trapp’s work; "a real Renaissance man," according to Brooks. "I use my sensibilities to look through the client’s eyes," says Trapp. He brought in furnishings and unique pieces that work well with the antiques that the husband had inherited, including a chandelier that had been in his mother’s dining room, which is now in the master bath. Trapp also had carpets designed for the home, and two limestone mantels reproduced by an artisan in Europe who he works with often.

"You shouldn’t be intimidated by your interiors," Trapp explains. "You should be comfortable putting your feet up, having friends and family over." The homeowners were looking for understated elegance, a sophisticated look that was still family-friendly. Trapp had to convince them on the idea of dark moldings against more neutral wall colors, which he feels "makes you look through the windows, not at them." In the end he won them over."

Trapp, an accomplished landscape designer, created the home’s outdoor spaces, "sewing it into the landscape instead of floating in that huge space," he explains, by adding mature trees and native plantings. And Brooks adds, "He did a wonderful job of achieving a European charm with the stone courtyard."

The views of the water and the mountains make you feel that you’re far away from urban life. That the team succeeded in their efforts to make the house feel natural in its environment was underscored when photographer Keith Scott Morton arrived at the shoot. "This can’t be right," he told Brooks. "The house I’m at is over 100 years old, and you told me it was new!"