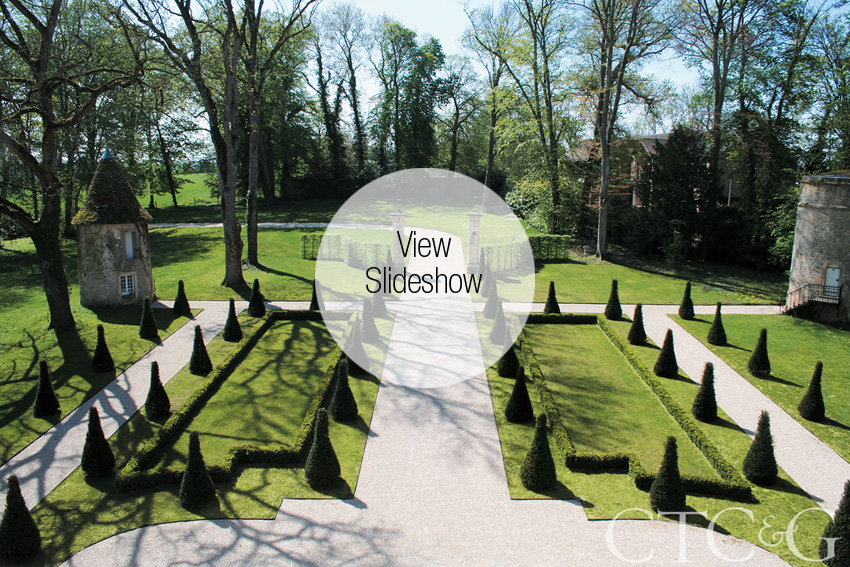 Globetrotting is nothing new for Greenwich-based Doyle Herman Design Associates, and the world is a more beautiful place as a result. Designing with éclat while honoring the local vernacular, DHDA has gained a global presence no matter where in the world clients call home. All three of these projects have an American connection, each had demons to surmount, all seem vastly different on the surface, but the solutions were blissfully straightforward the moment James Doyle and Kathryn Herman galloped in to troubleshoot the scene.

MARZY, FRANCE | MISSION To create a landscape befitting a chateau for an expat Connecitcut couple who sent an SOS when life brought them abroad. Originally, the powerful home could scarcely make an impression hidden behind a veritable forest of gawky trees  and approached from the rear. Immediately, Doyle and Herman saw that the house would portray a commanding presence if they rerouted the entry drive to access it straight on, which required shuffling the entry gates—accomplished by Colm Doyle of Doylescapes in Ireland (no relation to James Doyle) and his mason, Graham Hutton of England. Doylescapes’ stonework was the secret weapon running throughout all three of  these projects. For the plantings, spare and smart says it all. Conical yews sound the fanfare, a crisp boxwood edging keeps it clever, and a strong axis ties it all up to do  the chateau proud.

DUBLIN, IRELAND | MISSION To echo the modern architecture connecting two buildings with strong, simple lines for the mother of a client, who bought in the heart of Dublin and then needed a landscape to anchor the brave modern architecture she selected for the property. She knew where to turn. On one hand, the mews project balances an 1847 Georgian wall that had to be restored per the Dublin Planning Council—the architect brought it into the present tense with a sleek new surface. But the compound also consists of minimalist buildings, glass walls, and a glass catwalk to bridge venues. With limited space and buildings all around, the garden couldn’t be cluttered. Instead, DHDA made their succinct but expressive statement with lawn and groundcovers on two levels. To erase the lines between in and out, groundcovers and trees take their journey right up to the glass “walls.” Continuity is the unifying riff. And hardscape is the ticket—gravel, with informally spaced stone pavers to echo the modern architecture—keeping pathways easily navigated. A below-grade entrance could have been dicey if Matthew Willinger of DHDA hadn’t obsessed over the drainage details. When all was said and done, “The green experience makes it feel a lot larger,” says Doyle.

HOULGATE, FRANCE | MISSION To celebrate the traditional Normandy architecture, but update the exterior of a three-structure compound of a house that has seen 150-plus years of family history and serves as a vacation home for an extended family. In this home, sentiment runs deep. The mutual link was the interior designer, and on the strength of her recommendation, the Texan in the clan trusted DHDA to go from blah to brilliant. They reorganized the space, sorted out parking for three residences and gave the entry a smart boxwood parterre. Gone were the fussy flower borders confusing the lines of the buildings. Instead, they were replaced with benches and bold containers set on gravel, surrounded by an antique brick skirt and river rock.As a requirement for inclusion at this ocean-side location, all of the plants must be able to withstand regular dowsing with salt spray. The buffer/privacy hedges had to be hardworking as well as beach-quality, so hornbeam was a natural. And they went the eco-friendly route of putting in a permeable driveway to allay storm runoff. As always, the team designed for immediate gratification, while factoring in tomorrow’s issues. Whether working in Connecticut or further afield, DHDA always takes the globe into account.

A version of this article appeared in the May 2012 issue of CTC&G (Connecticut Cottages & Gardens) with the headline: The Grand Tour.