Tour a 1934 Dairy Barn Decked Out for the Holidays 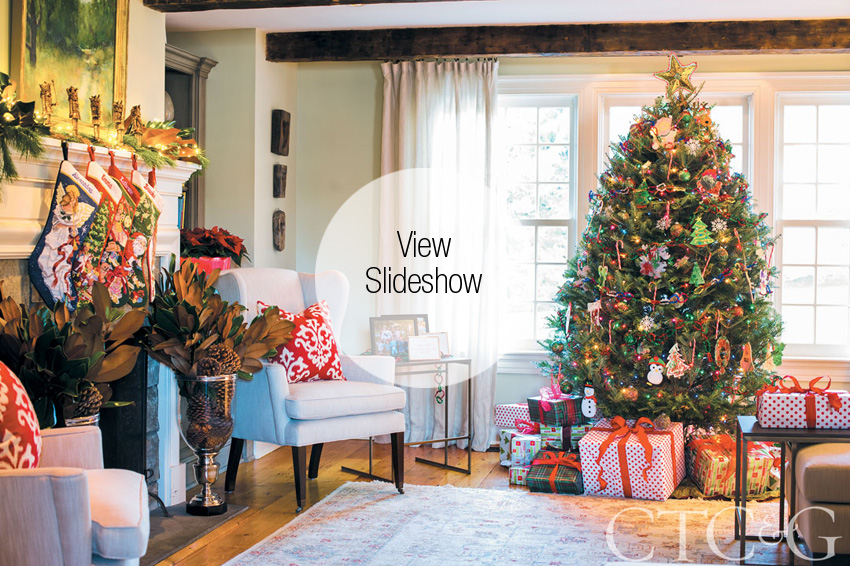 Old meeting new is nothing novel during the holidays. Families gather to celebrate, merging old traditions with new ones, and quite literally, when the year slides into the next. So for last year’s Newcomers Club of New Canaan Holiday House Tour, it’s no wonder that one of the tour’s houses, Country Stables, combined just the right amount of history with modern-day panache. The house, originally a dairy barn built in 1934, has maintained its architectural integrity over its long life and various owners. Its current inhabitants brought in designer Tamara Eaton to give the home a modern feel inside, while keeping the historical aspect intact. For last year’s house tour, Cobble Court Interiors designers Robert Rizzo and Steven March, along with the Newcomers, brought it to life for the holidays.

The vision they chose, “Sleigh Bells Ring,” was in recognition of the home’s storied past, but updated with traditional and whimsical choices that gave an elegant twist to the equestrian theme. In the grand foyer, which was once the center of the barn and runs the length of the house, miniature silver trees and votives surrounded an oversized urn spilling with flowers. “We basically did color-blocking throughout,” says Rizzo. “And the front foyer was entirely silver. It was like walking into a winter wonderland.” Much like the house design, the holiday decorations were traditional but fun and modern. “I loved doing a traditional Christmas but pushing it and doing more contemporary things within the context of traditional,” says Rizzo. The dining room—decked in gold with touches of red—is elegant without being stuffy. Red lacquered magnolia leaf wreaths hung on the walls, and handmade walnut balls lining the table were created by Rizzo and the Newcomers Club. “Rob found a picture of a nutball and handed it to me and said ‘we need some of these’,” says Carolyn Susanin, Newcomers Club design chair. “We started hot gluing and came up with these gorgeous nutballs. They were a huge hit. People came up to us and asked to buy them. That’s what was so impressive: A lot of what was done didn’t have a high price tag.”

While the entire home was beautifully appointed, the kitchen was perhaps the most surprising. “We had gone over the equestrian theme for everything,” says the homeowner, “but the kitchen had more of a whimsical element and was so delightful.” The funky tone was set by a Lindsey Adelman fixture installed by Eaton. For the holidays, Rizzo brought in color, including a yarn tree with felt animals and a gingerbread house with a forest of candy-cane trees.

“The homeowners have five kids, and I wanted them to feel a part of this too,” says Rizzo. “It was very kid-friendly with pieces they can play with and touch.” In the family room, the tree was decorated in ornaments made by the kids, while the living room was more traditional and swathed mostly in red. “It was a lot to take in visually, but it was beautiful,” says the homeowner. “They did a wonderful job layering and capturing the spirit of the house. Everything felt surprising and fresh. It was really a rewarding experience.”

A version of this article appeared in the December 2012 issue of CTC&G (Connecticut Cottages & Gardens) with the headline: Sleigh Bells Ring.