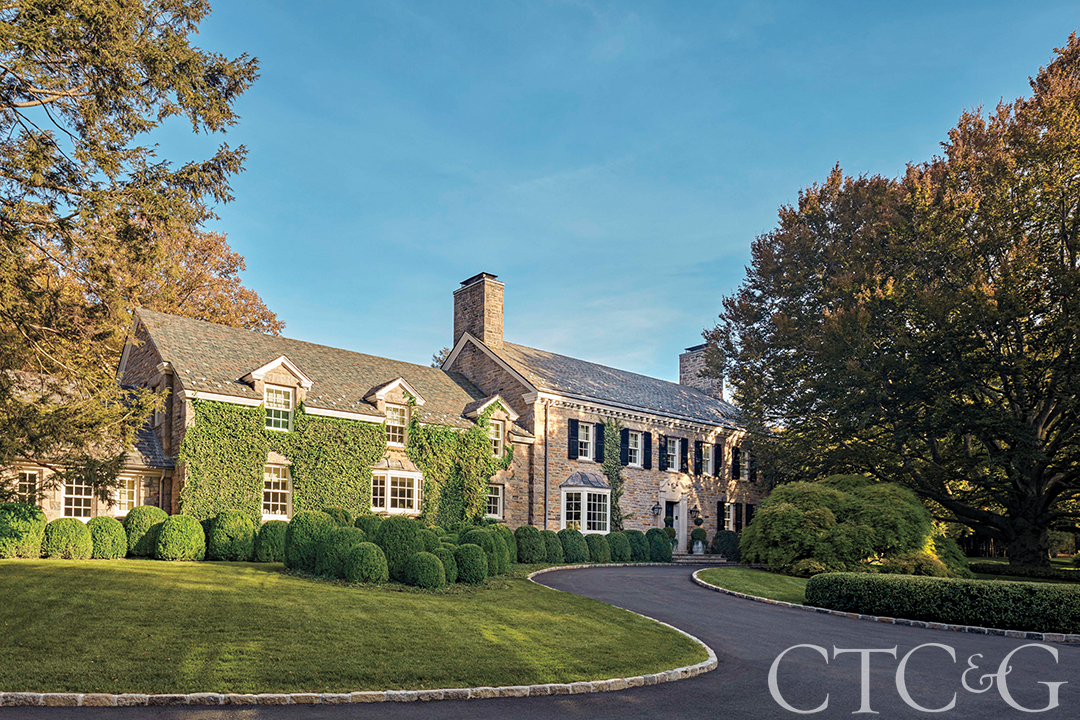 When a well-traveled couple (he’s British, she’s American) decided to trade life in a beautifully appointed London townhome for something equally elegant in Greenwich, a 1940s home that emulated the pedigree of a much older English residence from the Georgian period proved a worthy swap. But, despite good bones and a natural gracefulness, the structure suffered from a list of infirmities—two unflattering wings, weather-worn windows and outdated interiors among them. Move in would have to wait until architect Charles Hilton could remedy the situation.

“The overall plan included enhancing the original character of the home with further custom details, expanding the living space, and introducing 21st-century amenities,” explains Hilton, who had worked with the owners on a previous house when they resided in Greenwich in the 1990s. “Decorating-wise, it was pretty dated. The living room was mustard yellow, and many of the surface finishes required replacing.” 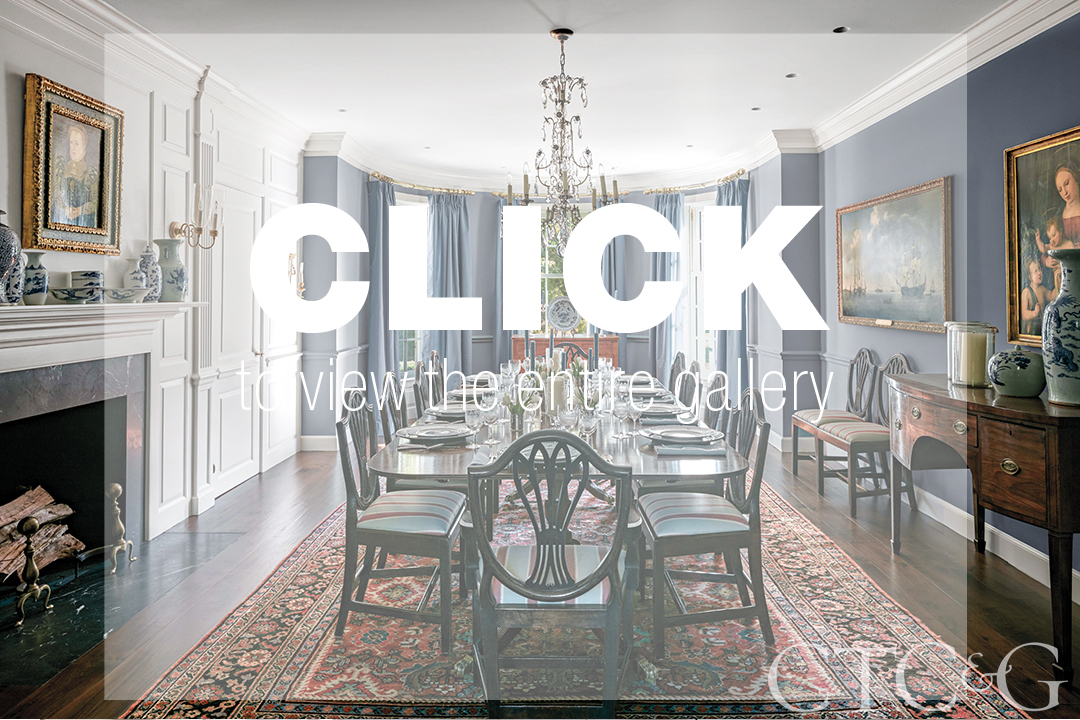 A new slate roof and reproduction windows and doors kicked things off with the latter creating an unexpected stumbling block. “When we removed the windows, we assumed we would find stone veneer exterior walls typical of the era, but instead we found solid stone load-bearing walls,” says the architect, noting the material left little room for introducing mechanical systems and spray-foam insulation necessary to bring the house into the current century. “We ended up furring-in many of the exterior walls in the house.”

Meanwhile, the addition of a new conservatory and breakfast room to the rear of the house established a space that welcomed morning sun while supplying extra square footage for entertaining. Steps away, an incongruous passageway made way for a mudroom crafted from stone meticulously matched to the rest of the house. The latter links the garage to an adjacent wing. Elsewhere, refreshed dormer trim, bronze railings and a new front stoop further enhanced the classic Georgian-style architecture.

During the arduous renovation, a portion of the foundation was revealed resulting in much of the existing plant material being removed. A stately beech that serves as a sculptural element in the entry was among the survivors, and landscape designer Lindsay Burn began her job by introducing mounded boxwoods in scale with the grand tree. “We opted for a limited palette that doesn’t call out,” she says about the mix of shrubs, grasses and perennials, the latter in soft pastels, placed throughout the property. “The plantings are more about form and texture than color. Everything is appropriate to an English countryside estate.”

Inside, hand-finished walnut floors create a pleasing flow as well as a welcome contrast to the white kitchen cabinets and marble-topped island, and on the upper level a small study converted into a master bathroom holds a double vanity and arched tub niche. Throughout the house extensive paneling, complex moldings and built-in bookcases offered up the sophisticated backdrop on which interior designer Trica Foley would eventually build.

Having visited the owner’s London digs, Foley was clued in on the look and feel of the aesthetic the couple hoped to emulate in America. Together, they sifted through existing artwork and furnishings to determine which paintings, upholstered pieces and decorative accessories would make the cut. Stateside, Foley used Farrow & Ball paints in soft tones to complement the old stone house. “They love classic English fabrics, so mixing linens, silks and cottons in damasks, stripes, chintzes and herringbone weaves felt right with their beautiful antique furniture, rugs and paintings,” she explains.

Under her guidance, the once-busy living room took on an air of calm where the owners like to sit and read. Similarly the dining room, previously aflutter with balloon shades and flower-patterned walls, settled into an entertaining/gallery space where early European paintings are hung on medium blue walls with creamy white trim.

Thanks to the combined efforts of the design team, the estate has found new life. “We worked hard to match all the details so everything is seamless,” says Hilton. “The house features all the conveniences of modern life but maintains an elegant traditional flavor both inside and out.”

A version of this article appeared in the March 2019 issue of CTC&G (Connecticut Cottages & Gardens) with the headline: Trading Places.