Tour a Bold Southampton Farmhouse with a Modern Spin 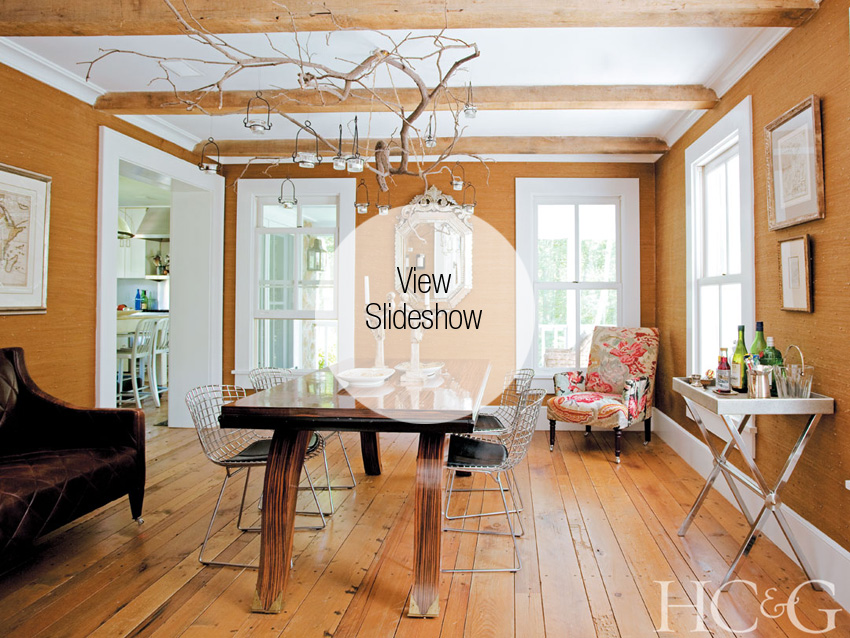 By the time Joanna Bobrowicz met Chas Godson, the daughter of a Polish diplomat had lived in India, fled the communists in Poland, escaped to West Germany and eventually moved to America, where she earned a degree in art history from Vassar. Stints at places like Sotheby’s and Christie’s preceded her eventual employment at George Smith, where she met her future husband, who founded the London-based bespoke furniture company.

Godson, after a comparatively quiet coming-of-age in London, first made his mark in the British antiques world in the 1960s. “I was 18 and unemployable, so it seemed like a good place to start,” he says with typical British wit. Years later, after opening a branch of his renowned furniture company in New York and meeting Bobrowicz, the couple married, moved to England and took up life in the countryside. Following the sale of the business, they returned to New York in 2008.

“After living in the country for so many years, the thought of living in the city seemed odd,” says Bobrowicz, who quickly pinpointed Southampton as the ideal locale for their new home and business. Named for a pair of 19th century furniture makers, the couple’s shop, Lennegan & Marantz, opened on Main Street in 2010 and, unlike its predecessor, offers a more varied array of interior-design accoutrements. “It’s a beautiful setup, with furniture, antiques, and great accessories from the ’60s, ’70s and ’80s,” Bobrowicz says.

She could just as easily be describing the interiors of their home, where a leather Chesterfield sofa in the television room lets loose with a patterned kilim and chairs upholstered in bold stripes, and an antique Japanese lacquer cabinet set atop a 17th-century English stand in the entrance hall provides storage for scarves and gloves. Located near Big Fresh and Scallop ponds, the house was transformed by the previous owner from a lackluster 1980s ranch into a quintessential Hamptons farmhouse. “Crown moldings, wonderful wainscoting, wide oak plank floors and tall farmhouse windows are everywhere,” says Bobrowicz, who gave the rooms the stylish updates they were sorely lacking.

While the trimwork supplied “bones and structure,” the white walls throughout were out of sync with her aesthetic, and she soon found herself poring over paint chips. “I love the idea of clean and bright, but I’m just not a beige person—I try, but before long color starts sneaking in,” says Bobrowicz, who painted the living and television rooms a soothing blue gray, coated one of three guest-room walls in chocolate brown and sheathed the dining room walls in a gold-toned grass cloth.

“The texture of the grass cloth gives the walls a richness,” notes Bobrowicz. “At night, with the candles lit, between the ambient light and the Venetian mirror hanging on the wall, the room just glows.” And the unexpected pairing of a traditional 1930s zebrawood table with chrome Bertoia chairs supplies extra verve. “It’s not a predictable pedestal table with Chippendale chairs like you’d find at Granny’s house,” she adds.

Bobrowicz cites David Hicks, the British interior designer renowned for his use of vibrant colors and bold mix of antique and modern furnishings, as an inspiration for her own unabashed come-what-may style. Not surprisingly, the living room’s centerpiece is a pair of 10-year-old George Smith linen velvet sofas, but she topped the classic pieces with animal-print pillows for a modern touch. The home’s entry stair sports an eye-popping striped runner, the guest room pits red lacquer nesting tables against those aforementioned brown walls, and the master suite balances a clean lined headboard with a majestic 19thcentury Chinese storage chest.

“Pretty much everything has been with us for a while,” she says. “When I’m arranging things, I always ask myself, What have we got, and where does it work? My goal here was not to do things on a grand scale, but to combine a sense of luxury and style with comfort.”

A version of this article appeared in the July 15 2011 issue of HC&G (Hamptons Cottages & Gardens) with the headline: British Invasion.

This article appears in the July-15 2011 issue of HC&G (Hamptons Cottages & Gardens).