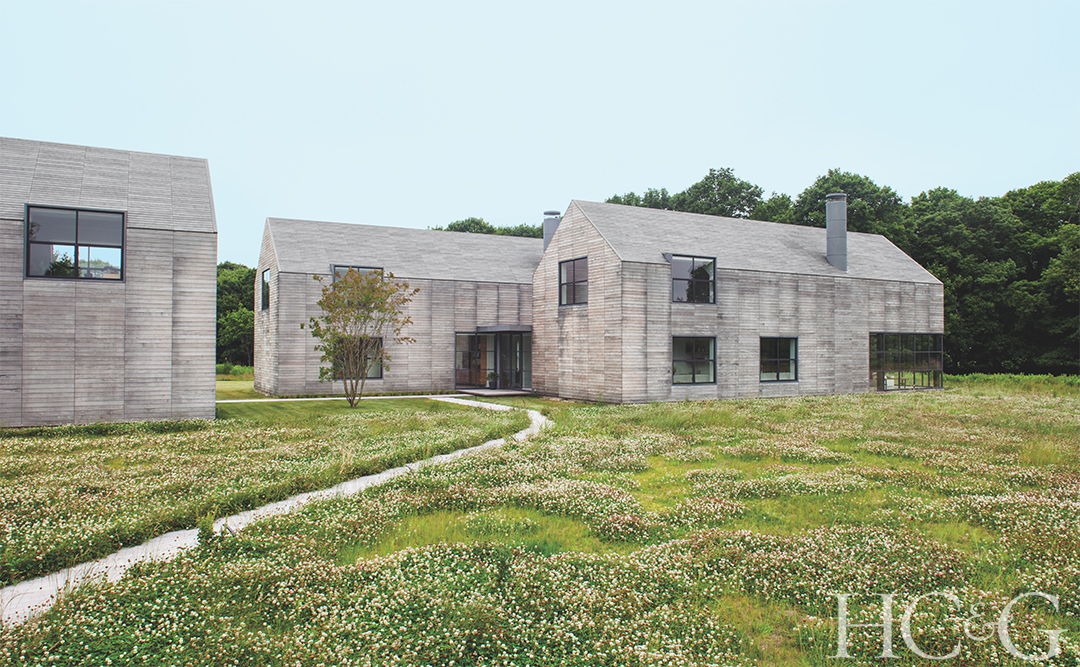 Like many great inspirations, the vision of a new home came to Melissa Hammel while she was getting a massage. She was in the spa at Bridgehampton’s Topping Rose House and had been struck by the building’s artful blend of traditional and contemporary architecture. “I thought, This is cool,” Hammel recalls. “Who did this?”

The answer was Roger Ferris, who has designed several notable structures in the Hamptons, including the modernist clubhouse at the Bridge golf club, on the site of the former Bridgehampton Race Circuit racetrack. Hammel, her husband, Michael Burton, their two daughters, Amelia and Rye, and Buddy, their Chesapeake Bay Retriever, had decamped from New York City in search of a quieter pace in the Hamptons, where they bought a verdant five-plus-acre lot in Bridgehampton. The couple—Hammel is a documentary filmmaker and Burton owns a property-management company—had dreamed of a cluster of smaller structures with specific purposes: one for public living areas, a private wing for the family, and a third building that would house a garage and an office for Hammel, where bookshelves just happen to include a copy of Virginia Woolf’s A Room of One’s Own. 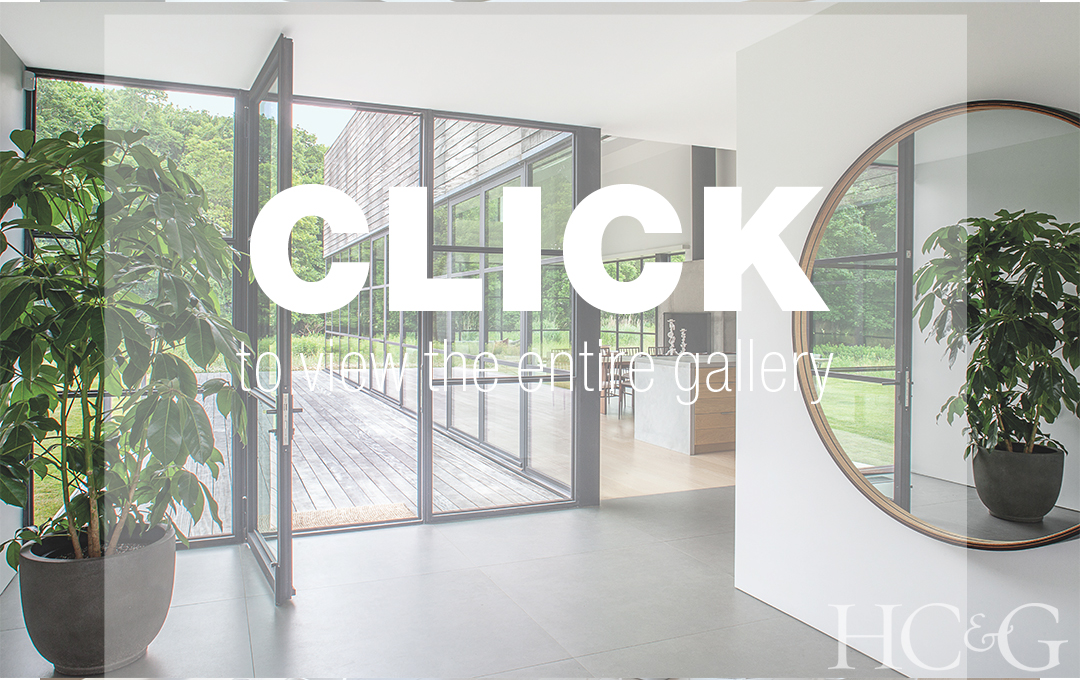 Ferris admired the couple’s ambition and was thrilled at the challenge, describing Hammel and Burton as “incredibly enthusiastic throughout the process, which is delightful for an architect,” he says. “I’m not just interested in designing houses; I’m interested in the journey and the dialogue and the inventiveness.”

“My first requirement,” recalls Hammel, “was that I didn’t want any impediments to the bucolic pastoral view.” A deep ravine surrounds most of the property, essentially protecting the tree-studded sight lines and ensuring privacy. “It’s a dramatic element,” says Ferris, “and the house is organized to take advantage of the views of it, which is why we call it Grove House.”

The approach to the home begins at the sinuous, long driveway, where the structures loom in the distance, their silhouettes suggesting barns more than domiciles. “I’m interested in the abstraction of the familiar,” Ferris says, “so the idea was to take a gable, which is familiar to people, but to abstract it and distill it to its very essence.” He achieved this goal in part by using the same material up the sides and over the roof to give the buildings a sculptural quality and blur the distinction between traditional and modern. Garapa, a Brazilian hardwood, was not nailed down, but rather fastened from the back, layered on the outside of a waterproof shell.

A path from the car park leads through a field of clover to the formal entry, which opens onto a great room anchored by a concrete fireplace. Large glass walls here and throughout the house not only frame nature, but also look back on the other structures. “Having lived in a loft in Tribeca,” says Burton, “we love the open feeling for entertaining.” But the downside to loft living, Hammel points out, “was that we always had to whisper after 7:30 p.m. so as not to wake the girls.” The adjacent wing comprising the family’s private quarters is both an airy retreat and solves any personal space issues: the den and the girls’ bedrooms and sitting room downstairs can be closed off by pocket doors, and Burton’s office and the master suite occupy the floor above. Punctuating the latter is an interior volume housing closets and a bath, a miniature gabled component that mirrors the shape of the home’s primary structures and fits neatly within the space like a Chinese nesting box.

The decor is intentionally straightforward, as the architecture and the forever views provide plenty to please the eye, although there are wonderful photographs and artwork arrayed on picture ledges and sculptural pieces of furniture throughout. “All the bathrooms in the house are the same,” Hammel says with a laugh. “Simple is for me.” The neutral palette and unfussy accoutrements have a calming effect on the filmmaker, whose newest documentary, The Value Project, explores the concept of value in terms of land on the East End, from real estate developers to farmers to the Shinnecock Indian Nation. For Hammel and her family, the value of their home and its untrammeled views of nature is nothing short of priceless.

A version of this article appeared in the August 15 issue of HC&G (Hamptons Cottages & Gardens) with the headline: Grove House.