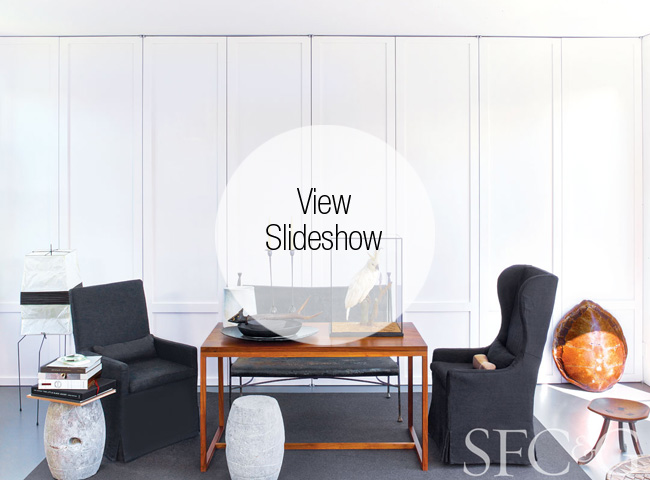 When his career took him from Manhattan to San Francisco, creative consultant Michael Ingram Jones called upon Brian Messana and Toby O’Rorke, partners in their eponymous, New York–based firm, to breathe new life into a pair of cottages he’d purchased in Pacific Heights. “They date back to 1865 and, for want of a better word, they were cute, but in dire need of help,” says O’Rorke. “So a ground up, gut renovation was a given.” Ingram Jones had previously hired the architectural duo to redesign his West Village apartment and notes, “I liked the pull and push of our discussions. They always led to something innovative.”

Sited perpendicularly to one another, the structures are hidden behind a row of Victorian houses. After negotiating a 70-foot-long, narrow passageway, Ingram Jones emerges into his walled-in garden. “And yes,” he says, preemptively, “that’s the same route all the building materials took!” Luckily, his largest piece of furniture, a vintage Milo Baughman sofa, came in two pieces.

Messana, who honed his chops with renowned architect Richard Meier and interior designer Peter Marino, and O’Rorke, a member of the Royal Institute of British Architects who has worked with Ralph Lauren and Donna Karan, weren’t in the least phased by the bureaucracy and labor required to bring the cottages up to code. And thanks to their thoughtful renovation, the gray exterior cladding and all the window types are historically faithful. Inside, simplicity is exemplified in doors that have touch latches instead of hardware; ceilings free of down lights; discreet outlets and light switches; and a quarter-inch shadow reveal between walls, floors and ceilings that subliminally simulates weightlessness. Thanks to this absence of visual distraction, though it measures in at only 700 square feet, the home feels spacious and light.

The entry door—a glossy magenta that gave the homeowner his desired wow factor—opens into the cottage that functions as a living/dining room. The rear wall features floor-to-ceiling pivot-hinged glass doors that flood the room with light and open onto the backyard, extending the space into the outdoor entertaining area. The second cottage is home to the master bedroom, bathrooms and study. The spatial treatments epitomize Messana O’Rorke’s economical, tailored aesthetic. As Ingram Jones puts it, “They find beautiful, simple ways to solve problems.” Their decision to bridge the skinny divide between the two cottages by converting it into a galley kitchen, for example, was inspired. Its white lacquered cabinetry and statuary marble countertops radiate light on even the cloudiest days, and its glass walls and ceiling bring to mind a James Turrell room where sky has a palpable presence.

Ingram Jones describes himself as “downright materialistic,” and along with thousands of books—double stacked in one of the closets—and hundreds of horn beakers, he owns several of William Gudenrath’s glass vases and vessels. Like many of his objects, they’re displayed en masse. “They deserve to be empty because their silhouettes are all important,” says Ingram Jones. “There’s a calm backdrop here that brings out the honesty in things and people, and I should know better than to interfere with that. Brian and Toby’s work is best left unadulterated.”

A version of this article appeared in the November/December 2015 issue of San Francisco Cottages & Gardens with the headline: Cottage Industry.