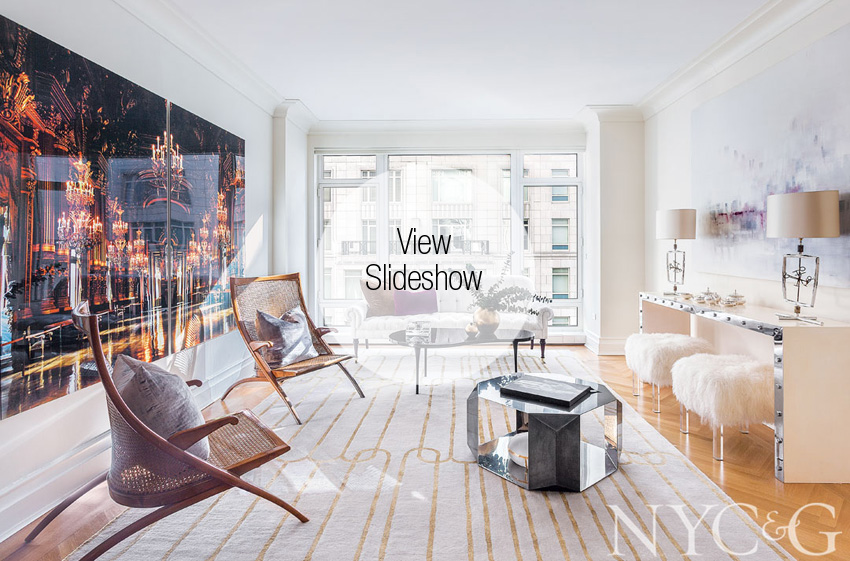 Along with Wall Street and Broadway musicals, real estate is in New York’s blood—a subject of constant intrigue for even the most jaded citizens. Not surprisingly, some of the Big Apple’s most prestigious addresses never fail to fascinate, even when they become deeply entrenched in the real estate firmament. One of these is 15 Central Park West, the limestone-towered edifice built by architect Robert A.M. Stern over a three-year period and completed in 2008. Its 14,000-square-foot fitness center, private dining room, and personal wine cellars are just a few of the amenities that have drawn the attention of real-estate pundits since the buzz about the building and its 202 apartments began more than a decade ago.

Fifteen Central Park West has predictably attracted a smattering of famous tenants, as well as a host of residents who prefer to avoid the bold-faced-name treatment. Among the latter: an international couple who hired Greenwich-based designer Lynne Scalo to decorate their 1,292-square-foot pied-à-terre. They maintain various residences around the globe, but visit New York often and wanted to be in the center of it all.

“The challenge with designing a smaller space is making it feel grand,” Scalo says, “while keeping the architecture in mind.” No small feat in a building that bears the stamp of Robert A.M. Stern. Fortunately, given the structure’s relative newness, Scalo started with that rarest of forms: a light-filled space unfettered by the accumulations of time and graced with good bones. “When I first stepped into the apartment, it was a blank slate,” the designer recalls, adding that the view out the front window—framed by the condominium’s limestone façade and a wrought-iron balcony—reminded her of Paris and became her point of inspiration.

Given this pristine canvas, Scalo applied subtle window treatments in soft colorways that make a statement but work in all seasons. Textured wall coverings enhance the spare interiors in a purposefully minimal way. (“I don’t like overly dressed rooms,” she says.) Furniture choices are deeply plotted and deliberate, such as the living room’s Donghia cocktail table, a multifaceted stunner fashioned from both polished and brushed steel. It shimmers much like the city itself.

A wide range of artwork adds depth and panache, including a statement-making diptych of the Paris Opéra in the living room. In addition to the cocktail table, it sets the scene for a pair of lithe caned teak armchairs from the 1950s and a custom pale gray rug interwoven with a playful gold scrollwork repeat. “With every project, especially a small apartment like this one, I like to develop a point of view that’s both chic and smart,” the designer says. “Once I understand who my clients are and how they want to live, the creative process takes on a life of its own.”

To wit: The master bedroom’s tall headboard, which mimics the vertical thrust of the now-iconic building. “I wanted each piece of furniture to offer something visually,” explains Scalo, who finished off the room’s look with a pair of elegant crystal lamps sheathed in dove gray satin shades, gray shagreen nightstands, and a satiny silver hide overlapping a leather-trimmed raffia rug.

Scalo has intentionally incorporated such sophisticated vignettes at every turn. Against a living room wall, two Mongolian fur–covered stools on acrylic legs sit at a polished-nickel console of her own design. A pair of 1940s-style lamps are a nice complement, she notes, to an English silver tea service from her clients’ collection. The designer’s aim: capturing the hardness of an urban setting while revealing an underbelly of softness. “I wanted to create a sculptural moment,” she says, “in the place these people call home.”

A version of this article appeared in the March 2016 issue of NYC&G (New York Cottages & Gardens) with the headline: Chic Retreat.