Tour a Classic Shingle-Style Home With a Cheerful Palette 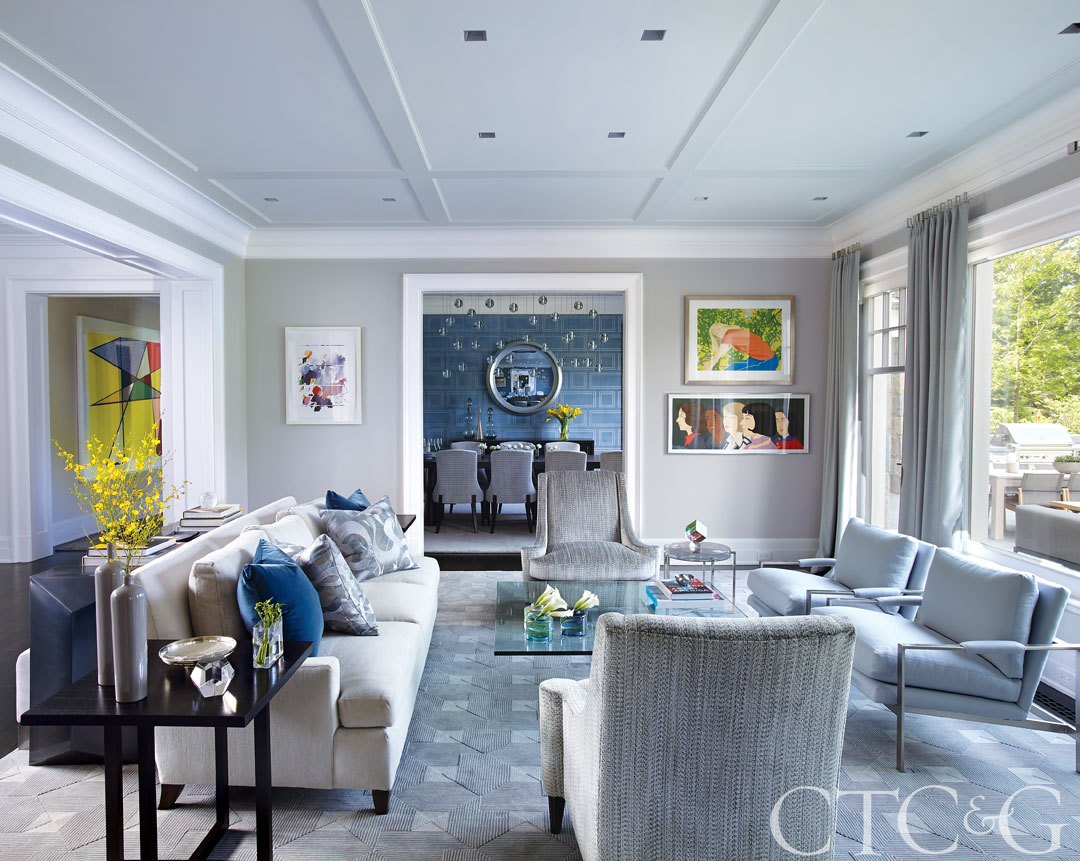 Fun. Playful. Sexy. These are not words often associated with traditional homes, especially those on estate-sized lots in prestigious neighborhoods in Fairfield County. But they are apt descriptors for many of the details interior designer Amy Aidinis Hirsch included in a classic Shingle-style home to keep the interiors lively, fresh and appropriate for a young family. In the dining room, geometric wallpaper with a hint of silver and a lacquered ceiling elevate the space. “It nearly twinkles,” she says about the evocative dining quarters. Moving to the largely navy blue billiard room, the broad band of “super happy yellow” fabric that rims the alpaca drapes pops, and in the breakfast nook, the glass light fixture is reminiscent of Champagne bubbles.

According to Hirsch, these moments exist and succeed because they are grounded in a traditional shell that provides a secure backdrop for such unexpected interjections. “It’s the paneled walls and moldings that allowed me to the push the envelope,” she says. And it was architects Jerry Hupy and Don Aitken of the prestigious firm Shope Reno Wharton who created the thoughtful framework that acknowledges its surroundings. “Given the neighborhood, we couldn’t build a Richard Meier box, and the property lent itself to a long horizontal building in keeping with Shingle style,’ says Aitken, noting the dormers, gables and sweeping verandas are emblematic of the local vernacular. “We also designed the house so all the rooms including the bedrooms would have views of the beautiful property.” 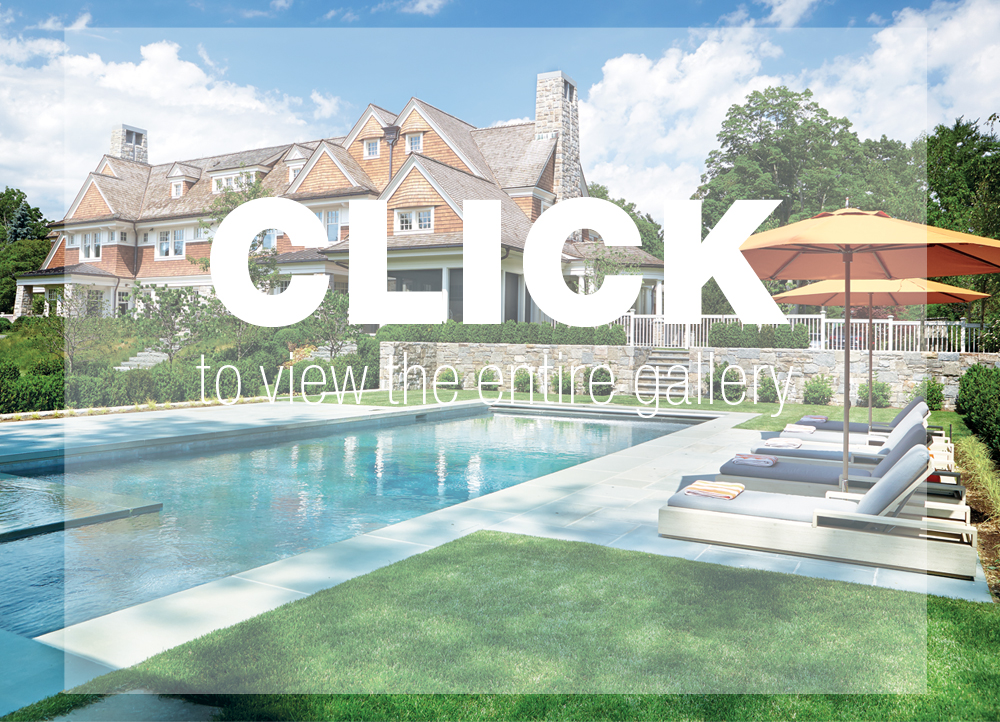 But the rolling 2.4-acre site with its swimming pool and tennis court wasn’t always so. “Nothing on the old property had been maintained, and the site work presented a major challenge,” recalls builder Jim Hoffman of Sound Beach Partners, who, along with Doron Sabag, was the owner’s first hire; they also brought the architects and designer to the project. Hoffman credits landscape architect James Doyle of Doyle Herman Design Associates with organizing the back of the property with a series of terraced granite steps that now lead to a flat grassy play area and the tennis court below it. “He managed to place the tennis courts at the bottom of a second hill and almost out of sight,” Hoffman adds.

Meanwhile, the entire team collaborated on ways to balance a modern aesthetic with a traditional structure starting in the two-story entry where the glass railing meets paneled walls. The idea continues in the living room, where in lieu of a heavy coffered ceiling, the lap profile trim boards articulate without being overwhelming, and windows here and throughout are picture framed. “There are no sills, and everything is kept taut and tight,” says Aitken. And about their simplified approach to the millwork, Hupy adds, “We did that so Amy could bring life into the rooms with furnishings and other things, similar to what they do in an art museum.”

For her part, Hirsh continued shaking things up with strong doses of pattern and a “50 shades of blue” palette that “carries your eye from place to place.” Things begin quietly in the living room, where the neutral furnishings take a back seat to the commanding view. “This is a simple space, so we used the rug as a statement piece,” says Hirsch, noting selections from the homeowner’s modern art collection spike the walls with color. Midnight blue accent pillows on the sofa connect with the azure tones on the dining room wallpaper visible through an opening in one direction, and the navy that dominates the billiard room is discernable on the other side. In the kitchen, counter stools sport cobalt leather, cerulean cushions top the sunroom seating, and high gloss periwinkle cabinets in the butler’s pantry (“They were Doron’s idea,” says Hirsh) add to the spectrum.

While the deft use of blue keeps things energetic and youthful, it’s the combination of a strong modern statement with an underlying traditional foundation that tells the real story. “It was our job to honor both,” says Hirsh. “And the team’s edited approach to both the architecture and the interior design helped accomplish that goal.”

A version of this article appeared in the March 2017 issue of CTC&G (Connecticut Cottages & Gardens) with the headline: House of Blues.